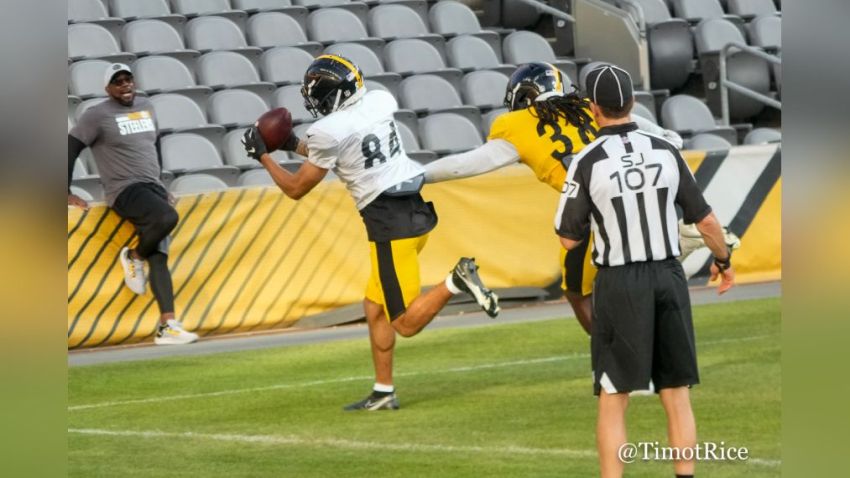 The Pittsburgh Steelers are reportedly releasing UDFA wide receiver Rico Bussey Jr, according to ESPN’s Brooke Pryor. Bussey will sign to the practice squad if he clears waivers.

He’ll be part of Pittsburgh’s practice squad if he clears waivers.

Bussey was signed after the draft. Transferring from North Texas to Hawaii, Bussey caught 31 passes for 274 yards and one touchdown in seven games last season. His best season came in 2018 with North Texas, going over the 1000 yard mark with 12 scores and an average of 15 yards per catch. Pittsburgh gave him a $3000 signing bonus. He’ll account for $1000 of dead money this year and $2000 next year.

He received a bit of buzz this training camp for a couple of impressive practices. But his game ran hot and cold. Still, he’s arguably the most talented true wide receiver of the “other” group of wide receivers but lacked the special teams value of guys like Cody White and Anthony Johnson.

Here was our camp evaluation of Bussey’s play.

“Rico Bussey Jr.: For a brief time, he was the talk of camp. But if there’s a such thing as an overrated camp darling, it was Bussey. He had one impressive practice early in camp, one that came in shells and not even full pads. Beyond that, he didn’t make a ton of plays. To his credit, he might be the best actual wide receiver in terms of talent and skillset with a nice blend of size, speed, and hands.

He could make the practice squad for the talent he has. But it’s a crowded room and Bussey offers little on special teams. Saturday, he played just one snap there Saturday compared to Cody White’s five and Anthony Johnson’s seven.

Clearing waivers should be a mere formality and according to Pryor’s report, the team will add him to their 16-man practice squad.

Pittsburgh’s roster currently sits at 68. Visit our cutdown tracker for a complete list of roster moves.