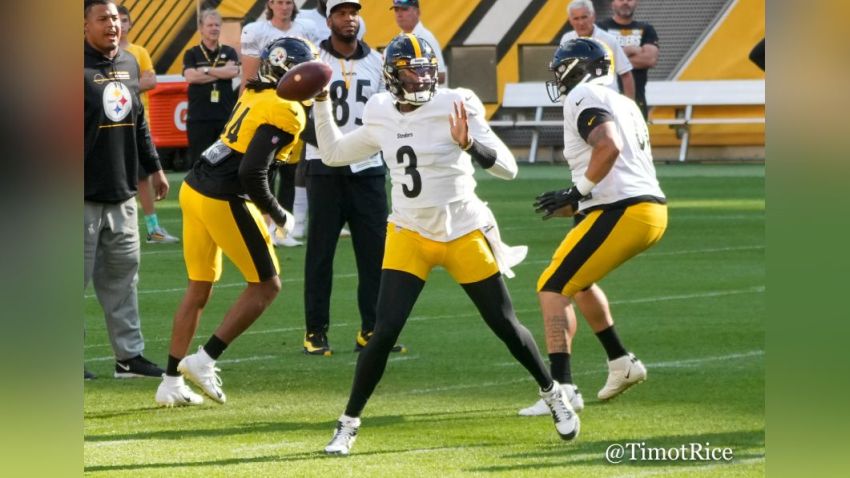 It hardly counts as a major surprise, but Pittsburgh Steelers QB Dwayne Haskins is expected to make the team’s 53-man roster, per NFL Network’s Ian Rapoport.

#Steelers QB Dwayne Haskins, the former WFT first-rounder, is expected to make the initial roster in Pittsburgh, sources say. A cool story, as Haskins worked his way back and has earned it.

Rapoport doesn’t comment where on the depth chart Haskins will land but it’s likely as the #3 behind Ben Roethlisberger and Mason Rudolph. Assuming he is third string, he will be a weekly inactive and need an injury in order to dress. Ideally, Haskins won’t be required to play a single snap this season.

Haskins had a bit of an up-and-down preseason, struggling mightily in the finale against Carolina. But he enjoyed a solid training camp, pushing the ball downfield, showing improved accuracy, and put points on the board. Our camp grade gave him a B- for his overall play.

Here is part of what we wrote in our camp recap.

“Haskins earned a ton of buzz all camp as the shiny new QB. Could he be the #2? Could he be the QB of the future? All questions not really worth asking at this moment, especially the latter. Haskins got off to a hot start, ripping the ball with big play after big play downfield. The numbers told that story So did the eyes. He has the best arm in camp. The zip, the velocity, ability to make tight-window throws, he can do it. No one came close to his number of 20+ yard completions. Through ten practices, he had more than double second place (14 to Roethlisberger’s six)”

He was signed by the Steelers early in the offseason. A former first-round pick, Washington released him last season after two difficult years with the team. It made for a no-risk investment. Haskins will be a restricted free agent next season, meaning the Steelers can keep him around cheaply for 2022 if they so choose.

Haskins future in Pittsburgh is unknown and the odds of him becoming the Steelers’ next franchise QB are slim. But he’s in a better, lower-pressure environment than he was before. And that certainly will only help his development.