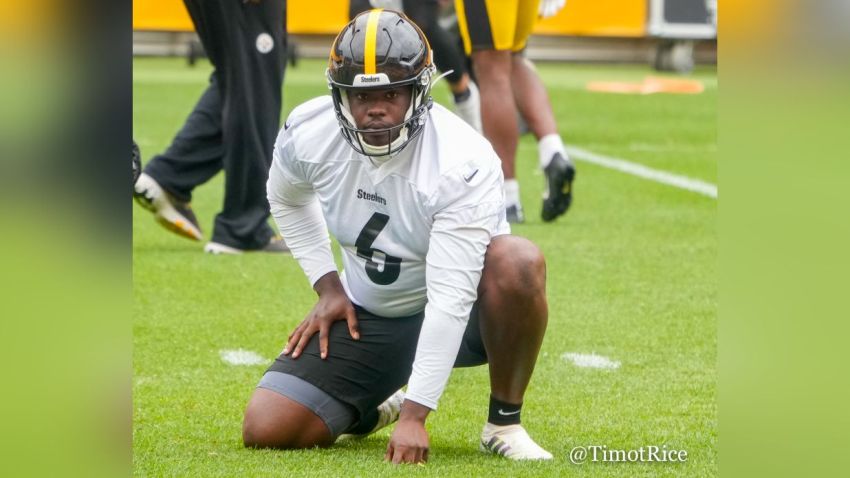 The only player on your roster you want to hold is your punter. An offensive linemen? Ten-yard penalty. Cornerback? Ten-yard penalty. Do it enough and you’re bound to get cut. But for punters, now predominantly the NFL’s holders on field goals and extra points, it’s a critical job. Don’t hold effectively and you’ll get cut, not to mention your kicker isn’t going to send you a birthday gift.

Pressley Harvin III knows the importance of the job. Speaking to reporters yesterday, he said it’s as critical as anything he’ll do this summer.

“Holding is, in my opinion, just as important as punting. Because that’s the part that puts points on the board. Just having that confidence in myself, I’ve been getting continuing to build that. I have a lot of guys around me that push me every single day on that. Because if I’m one centimeter off, I’m getting blown up about it. And I appreciate that because that makes me better on the field.”

Harvin was a part-time holder in college, so it was good he had some level of experience. But the NFL is a different game. He’s full-time now and there’s no margin for error. For those who need extra practice, there are even dedicated holding camps, as Pat McAfee once shared. There’s also a lore of Adam Vinatieri’s holders, including McAfee, if you’re interested.

A good holder might not mean a good kicker. But a bad holder probably means an ineffective one. And unless it’s an obvious botched snap or hold, the kicker is probably going to get all the blame, even if the holder didn’t fully do his job. But Harvin says Chris Boswell has welcomed him with open arms.

“The biggest thing is Boswell is a good guy. I love him to death too. And he’s been pushing, the long snappers, all have been pushing me too.”

Harvin also had a prior relationship with backup kicker Sam Sloman, making his NFL transition a little bit easier.

“Having Sam, someone that I actually trained with throughout college, be here too and kind of molding myself a little bit of getting that groove with him a little bit. It’s been definitely helpful.”

One bad outing can change perception in a hurry but Mike Tomlin said Harvin, and of course Jordan Berry, have been above-the-line holders so far. That’s what he told Steelers.com’s Bob Labriola before Thursday’s game.

And Harvin knows he must continue that streak the remainder of the preseason and should he win the job, carry it over to the regular season.

“Holding is a very important part of the game, if not a little bit more important than punting. That’s the side of the game that I’ve been trying to continue to hone in on and get better. Because you can never be too good.”

Never too good. That’s the right mentality to take, holding or punting. A month from now, Harvin may be doing both.