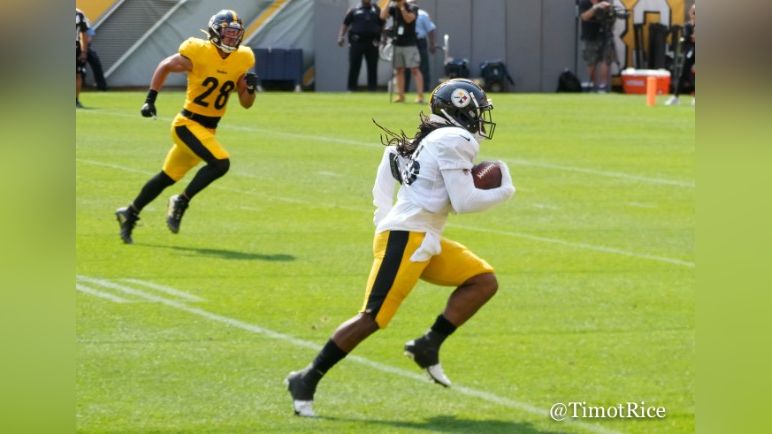 It’s just been two games but Anthony McFarland has logged infinitely more preseason snaps this season than he did a year ago. In 2020, there was no preseason, eliminated due to the COVID pandemic. And there’s no question all rookies, especially underclassmen like McFarland, were worse off for it. Some, like Chase Claypool, overcame that obstacle. McFarland did not, rarely seeing the field his rookie season with scant production the few times he did get the ball, finishing last year with 113 rushing yards, an average of 3.3 per carry.

Speaking with reporters Sunday, RBs Coach Eddie Faulkner said getting McFarland in exhibition action has been important this time around.

“The single biggest thing for Ant is the fact that he’s got a preseason this year,” Faulkner said via the team website. “You know what I mean? I feel like that’s really sped up his learning curve a little bit. So I’m excited about that.”

Through two games, McFarland has 12 carries for 43 yards, 3.6 yards per carry. After a sluggish debut against Dallas, McFarland played much better versus the Eagles, aided by strong run-blocking up front. It wasn’t a perfect game and Faulkner said like every other back in the room, McFarland’s ball security can always improve.

“Ball security is obviously something that we all can get better at. He’s had some things in the game where it puts a spotlight on him but anybody could be in that situation quickly. So he knows he needs to do that.”

McFarland did not officially record a fumble against the Eagles but had at least two close calls. One came on a third down reception in the second quarter, losing the ball as he went to the ground. It clearly wasn’t a fumble but McFarland, well past the sticks, has no good reason to extend the ball out the way he did. If there’s a defender in the area to hit him/the ball, there’s a high chance he fumbles it.

McFarland is expected to be the Steelers’ #2 running back this year behind first-round pick Najee Harris. There’s also a chance he gets worked onto the field in Pony formations, two running back sets with McFarland split out as a motion man.

So far, his improvement has been noticeable, though it was a low bar to clear. For Faulkner, the next hurdle is for him to find consistency as a runner.

“I just need to see it more consistent. He may have four out of five plays exactly like you want it. And in that one, a lapse of those criteria you just named. So we’re pressing that we can be a hundred percent on that kind of stuff. Ant wants it so I’m confident he’ll get that done.”