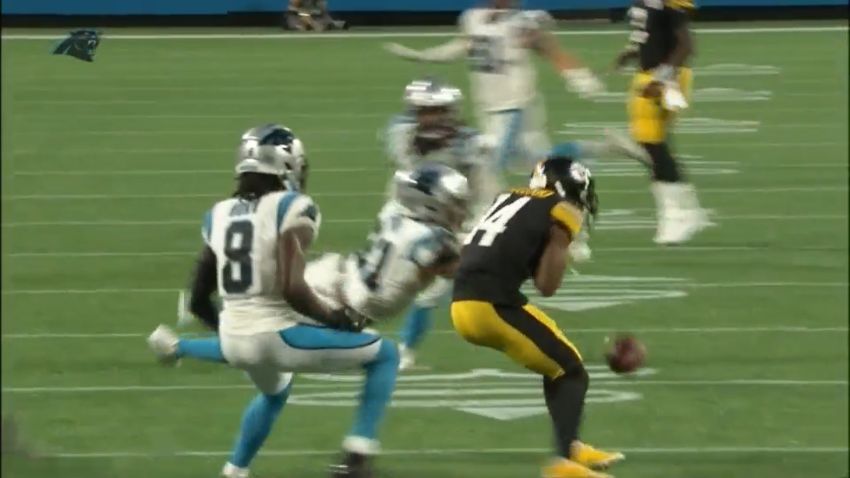 Well, that was ugly.

Thankfully, the preseason is behind us and we can start to focus on the Week 1 opener for the Pittsburgh Steelers on the road against the Buffalo Bills Sept. 12 because the preseason finale for the Steelers against the Carolina Panthers Friday night at Bank of America Stadium was just an awful game all around for the charges in the black and gold.

In his last chance to prove he’s really made strides, Dwayne Haskins looked downright dreadful for the Steelers, while the offensive line struggled to create much of anything on the ground. Ray-Ray McCloud had a case of the drops, and the defense struggled to cover much of anyone as the Panthers carved up the Steelers drive after drive, rolling to a 34-9 win to mercifully close out the preseason and dash any and all dreams this writer had of a historic 24-0 season for the Steelers.

For all the hype surrounding Haskins heading into his start against the Panthers, he quickly put that hype to bed as he looked pretty poor Friday night. Haskins struggled to truly command the offense as “the guy” Friday night, threw behind fullback Derek Watt high and hard on what should have been an easy rollout and dump off for an interception, and generally did nothing to move the offense until the final drive of the game in mop-up action.

Granted, his receivers let him down throughout the night, none more than McCloud, who dropped a ball over the middle that would have moved the chains, and then couldn’t get his feet in bounds on an absolute rope from Haskins down the left sideline. Fortunately for Haskins, he closed the game on a positive note, conducting a scoring drive in the two-minute drill.

Joshua Dobbs didn’t fare any better before leaving with an injury. Dobbs checked the ball down quite a bit and really didn’t try and make something happen with his arm, which was generally frustrating considering the situation the Steelers were in and where Dobbs finds himself on the roster. That said, he did make some great plays with his legs, which has always been his calling card.

Overall though, a pretty bleak night for the Steelers’ quarterbacks.

It was fantastic to see Benny Snell Jr. healthy and producing, but it was a familiar sight from the 2020 season: Snell takes the handoff and has nowhere to go due to the offensive line in front of him failing to create any sort of push.

Snell did rip off a really nice 17-yard run bouncing off of tackles, but for a guy who the Steelers know is “varsity level” according to head coach Mike Tomlin, he had anything but a varsity-level performance after missing the previous three preseason games. I still think he’s safe on the 53-man roster, but even he has to be frustrated with the lack of running room Friday night.

This should be the end of the road for Samuels in Pittsburgh though.

McCloud is a nice thought and all as a receiver, but he just doesn’t move the needle for me.

Getting a ton of work with Haskins Friday night, McCloud was downright frustrating, dropping a pass, failing to get his feet inbounds on another, and generally failing to make the most of his game-high nine targets. He did flash some YAC ability, which we know he has, on the final drive.

He’s a fine No. 5 receiver who should fit well in Matt Canada’s offense once it’s opened up, but I just don’t get too excited about him.

Chase Claypool played in the final regular season game and looked ready to go, hauling in an 18-yard pass and adding a 12-yard run on an end-around. That’ll do.

Behind those two, guys just didn’t do much. Matthew Sexton hauled in two passes for 10 yards but really shot himself in the foot (really leaning into that Cheddar Bob moniker) struggling to catch punts cleanly. I liked what I saw from Anthony Johnson on the final drive of the game, hauling in a 10-yard pass on a quick out, but I was disappointed Cody White didn’t get more run, hauling in just two passes for seven yards.

Eric Ebron played just one snap, and Pat Freiermuth played just five snaps Friday night. Thankfully the Steelers got them out of the game early.

That left a ton of snaps for Zach Gentry, Kevin Rader and Marcus Baugh.

I liked what I saw from Gentry once again as a blocker, while I loved seeing Rader mixing it up in the trenches snap after snap, bringing some attitude to the position.

Baugh got a ton of run though and didn’t do much of anything with the opportunity. Baugh was rough as a run blocker, but he did haul in two passes for 11 yards on the night.

These guys just didn’t make an impact at all in the receiving game, which is a bit of a concern from a depth perspective.

So much for closing out the preseason strong for a unit graded as one of the highest-performing offensive lines in football by Pro Football Focus.

The Steelers’ offensive line was terrible on Friday night, especially at the tackle position.

Chukwuma Okorafor looked disinterested and was beat around the edge easily a couple of times, allowing pressures. Dan Moore Jr. had easily his worst performance of the preseason, but that’s going to happen going against the star that is Brian Burns. He was baptized by fire and struggled. That’ll happen.

Joe Haeg was fine overall, but he did allow the Steelers’ lone sack of the night.

Inside, not much to write home about, though I thought B.J. Finney looked good at right guard in place of Trai Turner. I’m curious to see if Finney can push for that starting job at some point this season since Turner has been so inconsistent this summer.

One guy that didn’t play Friday that I’m worried about is Zach Banner. That knee just doesn’t seem right, and that’s very concerning since the Steelers are counting so heavily on him at right tackle this season.

Hats off to Isaiah Buggs and Isaiahh Loudermilk, who played their butts off Friday night.

Buggs, facing a possible numbers crunch along the defensive line, continued to flash against the run, dominating reps against the Panthers’ starting offensive line, recording three tackles in the loss.

Loudermilk recorded a nice sack on the night and continued to show off his hustle, chasing down a number of plays down the field. I think he sticks.

Carlos Davis flashed throughout the game against the run too, which shows just how deep this defensive line is, and I haven’t even mentioned Chris Wormley yet, who was the best defensive lineman for the Steelers on the night. Wormley had just one tackle and had a quarterback hit, so the stats might not show it, but he was in the backfield constantly.

That said though, the defensive line was gashed quite a few times on the ground, which was a bit concerning overall and continued a trend throughout the preseason.

I have no idea how Robert Spillane held up as a starter for a stretch last season; it was genuinely a miracle at this point because he has looked dreadful in coverage and has been picked on seemingly every week by running backs, tight ends and receivers.

Why he’s covering Robby Anderson in the redzone is beyond me, and he even struggled handling Chubba Hubbard out of the backfield throughout the night. He’s a great special teams player and solid BUCK depth, but man.

Ulysees Gilbert III struggled once again for the Steelers and should be off the roster. He was a mess in coverage, was rather messy as a tackler and just looked slow throughout the night. Buddy Johnson flashed at times, which was nice to see from the rookie who has been rather quiet this preseason.

Outside, Jamir Jones…have yourself a night. Jones recorded a team-high eight tackles on the night, recording yet another sack and added two quarterback hits on the night. He’s a lock for the roster at this point; I’d be stunned if he doesn’t make it.

Cassius Marsh also had a solid night at outside linebacker, recording three tackles showing he’s probably one of the five outside linebackers that sticks on the roster. Quincy Roche did much of nothing on the night, as did Jamar Watson. One of those will hit the practice squad.

James Pierre and Justin Layne really had solid nights, while Tre Norwood made some plays on the football on the night.

Pierre was a sure tackler on the night and was rather aggressive in his run fills and support throughout the first half. He really took a significant step forward this summer, which is great news for the Steelers.

As for Layne, the third-round cornerback really did a nice job bouncing back from a rough Hall of Fame Game to solidify a roster spot with the Steelers. He was strong in run support and played tight in coverage. Norwood did a nice job again at safety, recording four tackles and making a couple of plays on the football, though he should have finished one off for an interception.

Aside from those three, there wasn’t much I was thrilled with.

Miles Killebrew was better than he was the previous week, but didn’t really do much to move the needle. Same goes for Donovan Stiner, who played the run well overall, but didn’t do enough to crack the 53-man roster.

Lamont Wade did a great job bouncing back from a dreadful missed tackle on Will Greier’s 24-yard touchdown run to force a fumble on Carolina’s Darius Clark, but that missed tackle in space is one he won’t be able recover from that when it comes to the 53-man roster. That said, I’d keep him on the practice squad in a heartbeat.

Sexton watched his chances of making the 53-man roster blow up in his face thanks to a muffed punt that set up a Panthers TD, and then another juggling catch on a punt.

Aside from Sexton’s struggles, the special teams units were a mess overall.

Chris Boswell missed an extra point to close the game, Buddy Johnson was called for running into the punter, and coverage units overall just weren’t as sound as they were throughout the season.

Kudos to Jordan Berry and Pressley Harvin II though. They both punted the heck out of the football. I can’t wait to see what the Steelers decide there.