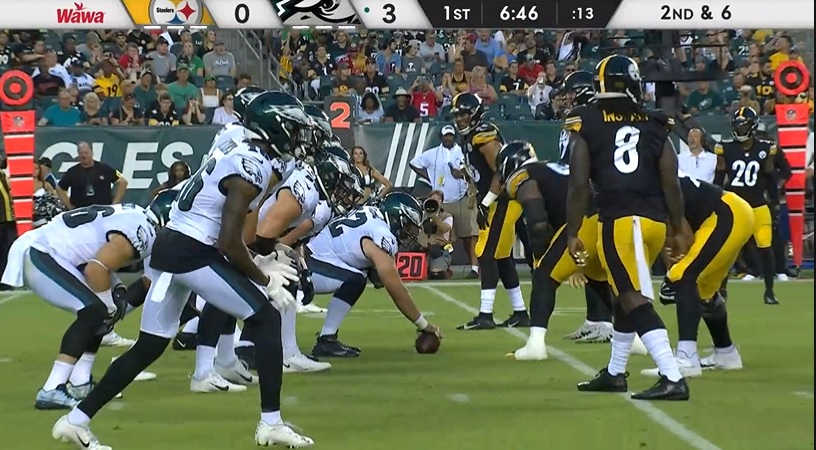 That was fun, wasn’t it?

After looking rather rough in the first half Thursday night inside Lincoln Financial Field against the Philadelphia Eagles, the Pittsburgh Steelers awoke in the second half and reeled off 17 unanswered points to remain perfect in the preseason at 2-0 with a 24-16 win over the cross-state opponent.

Quarterback Dwayne Haskins had a very good night for the Steelers through the air, while the run game looked dominant at times with a handful of running backs running hard with plenty of success. Add in a good night from the offensive line — in terms of run blocking — and it created a winning formula, as did the defense taking the football away twice and capitalizing on short fields.

Defenders like Jamir Jones, Isaiahh Loudermilk, Carlos Davis, Alex Highsmith and Lafayette Pitts stood out in a big way Thursday night for the Steelers as they move further into the preseason.

Let’s get into some positional grades for the Steelers’ second preseason win.

He really elevated his game Thursday night and showed good command of the offense and comfort in the scheme overall.

Mason Rudolph started the game again and threw a great ball to Diontae Johnson down the right sideline, but he continues to throw short of the sticks on third down and just overall adequate on the night. Nothing special, nothing disastrous.

As for Joshua Dobbs, he took a step back Thursday night, and it might largely be due to him trying to make a play. Dobbs was picked off throwing late across the middle into what looked like triple coverage, and also short-armed a throw to the far sideline that Anthony Johnson had to make a diving catch on.

We might not see Dobbs next week against the Detroit Lions too, so he’s really running out of time.

Pittsburgh was fantastic on the ground throughout the night, ripping off 10+ yard runs left and right, gashing the Eagles’ defense.

Rookie Najee Harris looked good in limited action, running hard and showing off his athleticism with multiple attempts at hurdles (let’s cut that out in preseason though, Najee), while Anthony McFarland bounced back from a rough Hall of Fame Game against the Dallas Cowboys with a good game against the Eagles.

McFarland showed off his power and appeared to be more decisive and confident in his decisions on the field, running with confidence.

Behind Harris and McFarland, I genuinely loved what I saw from Tony Brooks-James, Jaylen Samuels and Pete Guerrero.

Brooks-James closed out the win in style, running hard late in the fourth quarter to finish off the Eagles, while Samuels did much of the heavy lifting in the middle of the game, taking advantage of some big lanes to roll downhill against the Eagles’ front seven.

Guerrero, who has been with the Steelers since Sunday, looked good in limited action. His longest run of the night was taken away due to a holding penalty, but he has good speed overall and seems to have good vision overall. I am intrigued to see him more against the Carolina Panthers late in the preseason, as I don’t seem him getting work against the Lions.

JuJu Smith-Schuster saw his first action of the preseason and made some tough catches over the middle from Rudolph, moving the chains on a couple of occasions. We know what JuJu is, it’s just great to see him get some run.

Diontae Johnson looked great overall too, hauling in three passes for 41 yards, including the 33-yard stop-on-a-dime catch and run from Rudolph. His hands looks solid and he just appears more confident, which makes it so fun to think about what he could accomplish this year.

As for the backups, I was very impressed overall.

Cody White made a handful of tough catches and showed the Steelers made the right call in keeping faith in him early in camp despite battling an injury. White moved the chains three times and was a consistent receiver throughout the night. So too was Rico Bussey, who made a tough catch down the left sideline and also showed off some real burst on a screen pass to the left in the second quarter.

Anthony Johnson continues to stand out in a big, big way as a receiver. His diving catch on Dobbs’ low throw was a thing of beauty, and he did a great job on his touchdown catch, realizing he was wide open and settling into the soft spot to show Haskins his numbers. If he can make some plays on special teams, he’s going to stick around this year.

Not a great night for the tight ends overall.

Pat Freiermuth did haul in his first catch in his first action of the preseason, but he had a big Harris run wiped out due to a bad holding penalty after getting knocked on his keister by Brandon Graham. Welcome to the NFL, kid.

Zach Gentry had a rough night overall, dropping a pass from Haskins on the run and didn’t show much of anything as a blocker. That spells trouble for him as Kevin Rader had a strong showing again.

Rader hauled in two passes for 16 yards (one catch went for 15 yards) and really moved some guys off the line in the run game in the second half as the Steelers rolled. He’s a sound special teams guy too. I think he’s in the driver’s seat for the third tight end role.

It was so great to see the offensive line group as a whole have a strong night against the Eagles in the run game.

The hog mollies got after it on the ground, moving guys and finishing off plays with nastiness.

Pass protection was another issue entirely again and has me a bit concerned.

Kendrick Green had a rough night overall, but I was pleased with what I saw from Kevin Dotson as a backup. The Steelers ran behind him all night long and he was a physical specimen on the move. I was also equally impressed with newly-signed guard Malcolm Pridgeon, who really moved his feet well and opened rushing lanes in the fourth quarter. Keep an eye on him.

Penalties were real issues though with Trai Turner holding on a good Harris run in the first quarter, and John LeGlue getting popped for a holding call to wipe out Guerrero’s long run.

Without the typical starters suiting up, the reserve defensive linemen got after it Thursday night, teeing off on the Eagles’ backfield.

I was pretty impressed with what I saw from rookie Isaiahh Loudermilk in the second half, recording a half a sack and batting a pass at the one of scrimmage. He’s starting to flash more pass rush abilities than I saw on tape in college, which is great for the Steelers’ defensive line depth.

Chris Wormley had a strong game overall, recording a quarterback hit while playing the run well, while guys like Carlos Davis and Isaiah Buggs flashed against the run at times, helping the Steelers take away much of any semblance of a run game from the Eagles.

Inside, it was an ugly night overall for the Steelers’ linebackers. Outside is a different story though.

Inside, guys like Ulysees Gilbert III and Robert Spillane were borderline terrible on the night. Both really struggled in coverage, giving up big plays left and right. Gilbert also missed at least one tackle from living viewing, which marks the second straight week he’s done that in a big spot.

Devin Bush returned to action for the first time since last October and looked adequate overall. He did get burned by tight end Dallas Goedert in coverage on the first series for 34 yards, which is concerning, but I think there is some rust there, so I don’t want to panic about that just yet.

Outside, I loved what I saw from Melvin Ingram, Alex Highsmith, Jamir Jones, Quincy Roche and Jamar Watson.

Highsmith was a terror once again, living in the Eagles’ backfield, while Jones was fantastic off the edge, leading the Steelers in tackles while recorded a sack for the second straight week. He’s really starting to turn some heads.

As for Roche and Watson, those two young rookies flashed off the edge a handful of times rushing the passer. Roche was credited for half a sack by ESPN with Loudermilk, but it looks like it was actually Watson on tape getting around the corner. Regardless, that outside linebacker group is fun to watch.

I though Cameron Sutton had a poor game overall. While it’s nothing to be too concerned about yet, he looked pretty bad. He was beaten easily down the left sideline on an overthrow by Jalen Hurts that should have been a touchdown, and then was turned around by Jaelen Reagor on a sideline route later in the first half. He just looked lost all night, so we’ll see how he bounces back next week.

Tre Norwood took a horrible angle on Quez Watkins’ 79-yard touchdown on a screen route, easily getting burnt down the sideline, while Arthur Maulet gave up a few conversions on catches.

Outside of those three, I didn’t really see many issues that were glaring from the defensive backs. I loved seeing Justin Layne finish off a play with an interception, and I was very happy to see Lafayette Pitts jump the seam route, reading the route concept and the quarterback’s eyes to jump underneath the route and pick off the pass, finishing off the return with power.

Again, not too much to write home about here with this group as 35% of the Eagles’ passing yards came on one play.

Jordan Berry will not go into the night quietly.

The veteran punter, in a position battle with rookie Pressley Harvin III, had a tremendous night Thursday, averaging 44 yards a punt while dropping two deep inside the Eagles’ 20-yard line. He did a fantastic job overall. Maybe the Steelers can flip him for a draft pick come camp cut downs.

Kick coverage was just average on the day, as the Eagles recorded a 35-yard kickoff return forcing Anthony McFarland to make a stop, while the kick return unit wasn’t great overall with McFarland averaging just 19 yards per kick return. That’s not good enough.

It was nice to see No. 2 kicker Sam Sloman drill his lone field goal attempt after a rough first showing.

Punt returns were a mess too, with Isaiah McKoy recording a major brain cramp, going backwards on his lone attempt trying to make a big play, racking up a loss of seven.