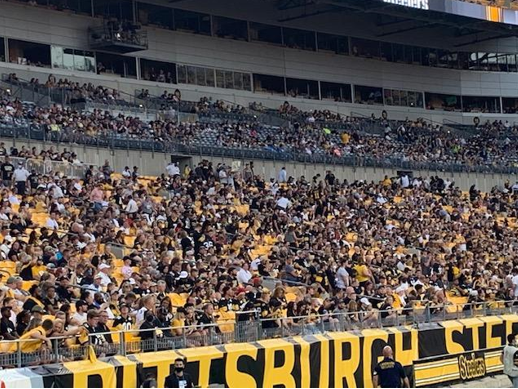 The Carolina starters thumped the Pittsburgh Steelers backups who used this game as a tune-up for the regular season for their starters. Carolina continued their domination even when bringing in their third string quarterback and other players from deep on their depth chart. The Steelers touchdown extremely late in the game brought the score to 34-9 but could not even convert the point after touchdown.

I attended the Steelers preseason game against the Detroit Lions. There was a lot to look forward to in the 26-20 victory. But an unexpected trip to Las Vegas resulted in me being on an airline flight during the final 2021 Steelers preseason game. I forced myself to watch the taped game Saturday morning despite knowing I would not like what I was about to witness.

Ben Roethlisberger looked sharp in leading the Steelers to a 14-0 lead over the Lions. Pat Freiermuth is a big target. I sat in the opposite end zone and Freiermuth still looked huge from 130 yards away as he reached up to snag his first touchdown out of the air. A second score and now we got us a tight end.

Mason Rudolph led two scoring drives, but the team settled for Chris Boswell field goals. Eric Ebron made up for a drive ending drop earlier by catching a 14-yard Rudolph pass on third and four. Rudolph even converted a fourth and one with a pass to JuJu Smith-Schuster to keep a drive going. 20-0 by halftime. 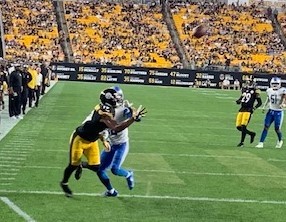 The Steelers defense shut out the Lions until the fourth quarter. Arthur Maulet played some in the slot but injured his ankle. Shakur Brown given an opportunity to shine but didn’t. The Lions closed the gap after scoring a second touchdown to make the score 26-13. The Lions successfully recovered an onside kick and march down to make the score 26-0. 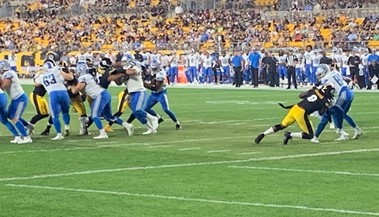 There is a reason for optimism as the Steelers offense built a 20-0 first half lead and the swarming defense held the Lions scoreless. But we must temper our optimism with some realism. The Lions sat many of their offensive and defensive starters.

I had a tough time watching and listening to the Carolina game. Steve Smith excelled as a receiver but not so much as a color analyst. The one point he made that I found instructive was his analysis on a Ray-Ray McCloud drop. He pointed out that Ray-Ray needs to get comfortable catching with his hands instead of with his chest. Indeed, I believe Ray-Ray may have caught the pass if he reached for the ball and pulled it in instead of letting the pass come to him. Same thing on the play he went out of bounds on a beautiful Dwayne Haskins throw. Pull the ball in to give yourself more time to plant your feet inbounds.

PLAYERS WITH SOMETHING TO GAIN

Mike Tomlin played almost no starters in the last game. I did not expect the Steelers backups to blow out the Panthers starters. But I did want to see individual performances. Some players had a lot to gain with some outstanding play. Dave Bryan listed eight players to watch closely in an article posted on Steelers Depot prior to the game. He listed quarterback Dwayne Haskins, running back Benny Snell, defensive back Tre Norwood, tight end Zach Gentry, linebacker Jamir Jones, cornerback Shakur Brown, long snapper Christian Kuntz, and wide receiver Matthew Sexton.

A line-up of back-ups is not expected to manhandle a group of starters. But that does not excuse poorly thrown passes, dropped balls, fumbles, missed tackles or penalties. I may be in the minority, but I love preseason games more for the players vying for a roster spot or to work their way up the depth chart. I expect the starters to perform especially against lesser competition. But it’s the do or die situations that players holding on to the fringe of the roster that are interesting. Alex Kozora recorded a Terrible Take on past Steelers making a splash in a preseason game to secure a roster spot.

Alex Kozora’s Steelers versus Panthers Winners and Losers  identified four of the players that Dave recommended to watch. Jamir Jones and Benny Snell made the winner list. Dwyane Haskins and Matthew Sexton the losers. I would add Tre Norwood and Shakur Brown to the latter. Zach Gentry and Christian Kuntz to the former. We all know Jordan Berry and Pressley Harvin are battling for the punter position. Pretty even but I give the edge to Harvin.

CONSEQUENCES OF THE GAME

The Steelers must release 18 more players by Tuesday afternoon. Shortly thereafter, the Steelers will announce the 16-player practice squad with most of spots taken up by the 27 pared down from the 80-man roster to the initial 53 player roster for the start of the 2021 regular season.

Steelers Depot hosts a live update and discussion thread for every game. During the regular season Depot readers held to a one thousand comment standard per half. Here are some of the “best” comments from the Lions and Panthers games. There is always some jagoffery but Depot readers exceptionally good at minimizing the “nattering nabobs of negativism.”

Detroit Lions at Pittsburgh First half

Readers typed 630 first half comments. Steelers Depot stalwart Alex Kozora started us off with “Here We Go!” that landed as the best comment. Nelsonator762 received a lot of likes with “The people who complained about picking Freiermuth are changing their minds now.” Chris92021 commented on the battle for backup quarterback: “Sorry yinz but I am still convinced Dwayne Haskins would give us a better shot at winning games than Rudolph. Rudy still hasn’t gotten a TD in 3 preseason games.”

Detroit Lions at Pittsburgh Second Half

Readers comments tailed off to 367 in the second half.

Darth Yinzer continued the quarterback theme with “Rudolph. Can’t. Finish.” As an average fan, I did find it disappointing that Steelers fans in the stands booed Mason Rudolph when he first came on the field before even taking one snap. That is not a new phenomenon. The Steelers first true quarterback, Jim Finks quit football in 1955 at just 28 years old. The constant booing from his own Steelers fans contributed to his decision. He was a pro bowl quarterback, but the Steelers weren’t winning enough games. You must have a thick skin and earmuffs to thrive in this game. Finks would go on to a Football Hall of Fame career as an administrator building the Minnesota Vikings, Chicago Bears and New Orleans Saints into strong teams.

Dante Parker observed Robert Spillane’s struggles in coverage. “I think they’re leaving Spillane in to see if he can shine against the Lions 3rd stringers. But the problem is he’s not, he’s actually getting beat. I hope Buddy Johnson is ready to be the 4th ILB, I think they’ll use Ingram in the middle whenever bush or Schobert needs a rest.”

Steelers at Carolina First Half

Another defender catching our eye was James Pierre. The Chin observed “Pierre has been a bright spot.” The Chin continued “Haskins would increase his completion chances if he’d stop throwing it to Ray-Ray” Maybe McCloud helped make up for it a little with his late touchdown later in the game. BigDickSwanging put the first half performance into context, “2nd unit D doing alright against their 1’s. I’m not mad at it.”

Steelers at Carolina Second Half

Readers faded in the second half with just 398 comments. The television coverage that kept cutting away from gameplay may have contributed.

Drop the Hammer garnered the top two comments. First on one of the players who had so much to gain with a robust performance but waned. “Sexton muffed #2. ‘Irene, goodniiiiiight.’” I guess he appreciated the cameraman cutting away from the game, “Dang. Those cheerleaders look fine in the background. Maybe this game wasn’t a waste after all.”

Steel Squirrel was high on “Highsmith is going to kick some serious ass this year.” He did not play but guess the squirrel isn’t nuts, he’s already getting ready for the regular season. 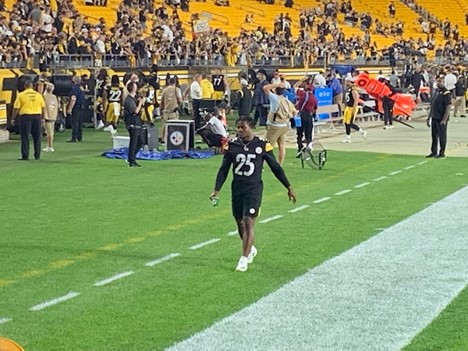 I enjoy highlighting your comments. Should I continue in the regular season?

I am glad the Steelers played four preseason games. It gave Mike Tomlin that much more time to evaluate the players that will compose the initial 2021 edition of the Pittsburgh Steelers.

It is important to temper any optimism or negativism with realism. The Steelers are not as good nor as bad as some of the preseason performances indicate to fans around the country.

With a 17-game season, roster depth is more important than ever in league history. More games mean more lost time due to injuries. The Steelers hit hard last year with season ending losses to starters like Devin Bush and Bud Dupree. Hopefully, the Steelers escape any devastating injuries but an additional game raises exposure and players that were backups may be the next men up.

Overall, this preseason has shown me that the Steelers have decent depth at most position groups. I would be happier with more depth at safety. How about you? Did the 2021 preseason games make you more optimistic or pessimistic about the Steelers chances this season?

I always like to offer a music selection. A lot of players in Pittsburgh and around the NFL have their playing careers on the line. For all of them, I dedicate I Will Survive by Gloria Gaynor. 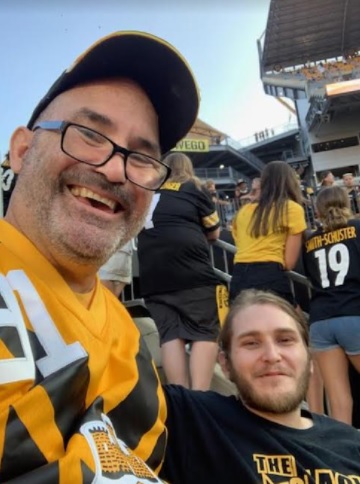