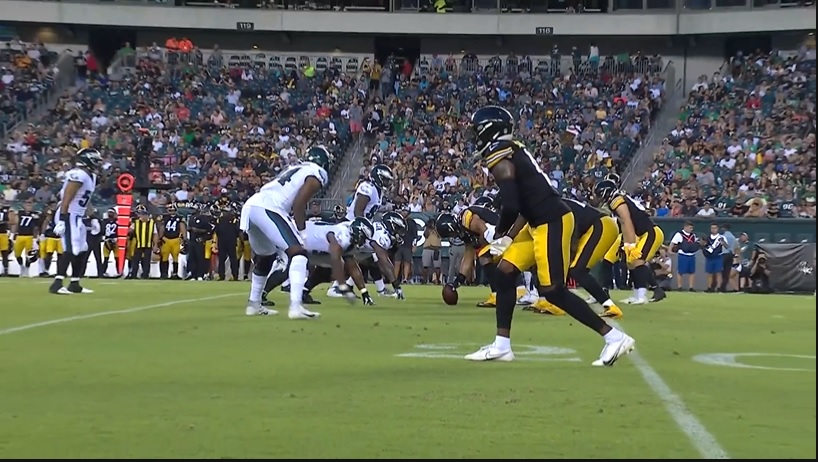 I was on an airplane between Addis Ababa and Washington DC while the Steelers played the Eagles. I could not stream audio or video so had to settle with following the game on the Steelers Depot Live Update and Discussion Thread.

Many thanks to all the Steelers Depot readers who kept me posted on the Steelers progress through their comments. I did watch a recording of the game after landing. But tough to listen to the two Eagles homers who thought that blatant holds were excellent blocking just because the zebras stayed silent.

I was surprised by the dichotomy between reading accounts of the game and watching the recording. Mason Rudolph looked fine to me. His pass to Diontae Johnson was excellent. Dwayne Haskins performed well in driving for the first Pittsburgh score. Penalties killed two early drives. Something to watch for in the next game against the Detroit Lions. Can the Pittsburgh blockers clean up the holds?

The running game in the second half was fun. Just keep jamming it down their throats if the defense can’t stop it. But that was the second half. The success coming against gassed second stringers and then then deeper into the Eagles defensive depth chart.

Encouraging but would like the Steelers to score earlier in the game.

Pittsburgh’s defense gave up 16 first half points. Another offensive play given up. This time a 76-yard passing play that Trey Norwood got much of the blame for taking a bad angle. But even though the cameraman tried to keep a tight shot on the runner, you saw a would-be tackler literally yanked backward by an Eagles player. The announcers all exclaimed how excellent the blocking was, it seems to me at least one blatant hold freed up the player to run free. Still as Chuck Noll would say, “you have to be able to play better than the refs, ref.”

The defense applied lots of pressure on the Eagles quarterbacks forcing throws resulting in two interceptions. They collected some sacks. But the linebackers did get beat on some passing plays. I wonder if Joe Schobert will see any playing time against the Lions. Robert Spillane may be in more of a support role this year if everyone performs as advertised.

I’d like the Steelers defense shutout the Lions in the first half rather than the second.

Jordan Berry is not going quietly into the night. He had some great punts.

The coverage team gave up a 35-yard return. Not acceptable.

Nice to see Chris Boswell kicking and for Sam Sloman to convert his field goal attempt.

Depot readers were below the line in comments. Just 374 comments in the first half and another 374 in the second. Let’s go people, obviously it’s time to be the next man up to get above the line. The standard is the standard.

Nelsonator762 sounded reasonable with “Remember everyone, we won’t see most of these guys in the regular season.” To which Dave D replied, “There is no reason to be logical in here! Sheesh!”

Paepercup saw a bright light early in the game when things looked dark, “Good strategy to pretend we suck during preseason, then turn it up during regular season.”

In the second half

Triple Lindy had two comments that folks liked, “Just to be clear…. I’m not saying Haskin’s is great…or even good…at this point. But from what I’ve seen of him, thus far…. he’s (clearly) got the mobility that MR doesn’t have….and he’s playing with confidence. I’m encouraged….so far.” Then, “The Steelers look and….. well….’feel’ different with Haskins at the helm. Yeah, he makes mistakes…. but…. I’m definitely leaning towards Haskins as ‘QB2’. I like Haskin’s ability/potential to extend plays/a play. Say what you will about Haskins…but he’s dynamic in a way that MR isn’t…. nor ever will be.” In the Pepsi or Coke battle this is definitely a Haskins group.

Nelsonator762 tried to put the defensive first half performance into perspective: “I know it looks easy against our defense, but no Heyward, Tuitt, Watt, Haden, or Minkah tends to have that effect. And everyone cut Bush a little slack, he’s still getting his feet back in under him.”

Jason W captured what many of us would like to see in the regular season: “I love running to ice the game. Regardless of the talent we’re playing against it just feels good.”

The Steelers will release five players just before playing the Lions. I believe Tuesday is the deadline. With just one more preseason game after that, who are the first five to go? Will they let kicker Sam Sloman go now? Will Harvin and Berry have one more game to determine who wins the punter battle? With 11 wide receivers on the rosters, will one or two at the bottom of the depth chart go? Will there be any surprises on the first cut? I have more questions than answers. Help me.