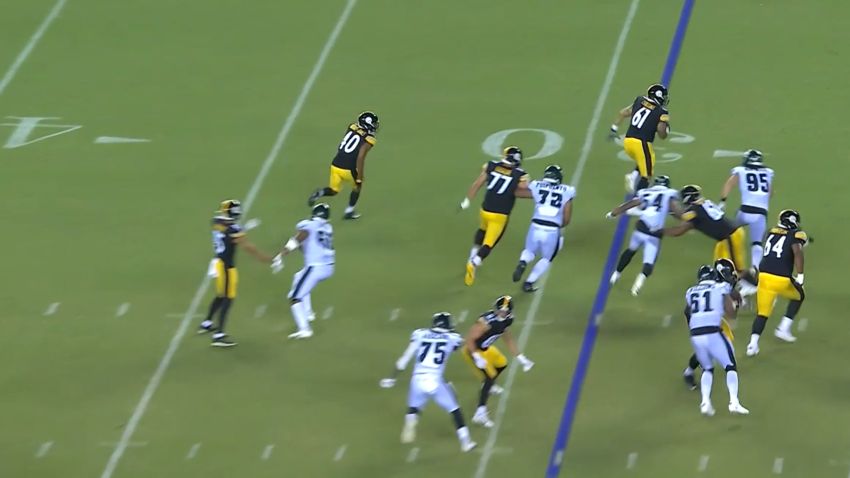 Sometimes the old is the new, and that’s what we have on deck today, with the Steelers having brought back running back Tony Brooks-James. Originally undrafted out of Oregon in 2019, he would eventually find his way to the Steelers later that year when injuries piled up in the backfield. He suited up for three games, rushing for seven yards on eight carries (he had minus-11 yards before contact, and 18 yards after contact, to give you some perspective on what he was working with). He also returned two kicks for 32 yards.

Since then, he would spend time with the Falcons and the Vikings, being active for one game with Atlanta a year ago, during which he recorded three rushing attempts for four yards. He remained with the Falcons until being released on July 26, and the Steelers picked him up about a week later, signing him on August 3.

Despite having signed a couple of days before the Steelers’ first preseason game, he did not participate, but he was on the field last night, and he found success in the fourth quarter, finishing the game with 51 rushing yards on nine attempts. He also had one reception, but only picked up one yard.

Pittsburgh is already fairly deep at the running back position, with a clear top five consisting of Najee Harris, Benny Snell, Kalen Ballage, Anthony McFarland, and Jaylen Samuels, so it will be rather difficult for a back like Brooks-James to make much of any headway.

They also had another new face, Pete Guerriero, show some flashes of what he could offer during the game, even if his final stat line—20 yards on seven carries—doesn’t give a proper indication of just what that means.

But that’s an entry for another day. This one is on Brooks-James, who, a year and a half later, is back in Pittsburgh hoping for another opportunity. At the very least, he’s getting some film out there, which could help lead him to another chance in another city if he doesn’t stick here.