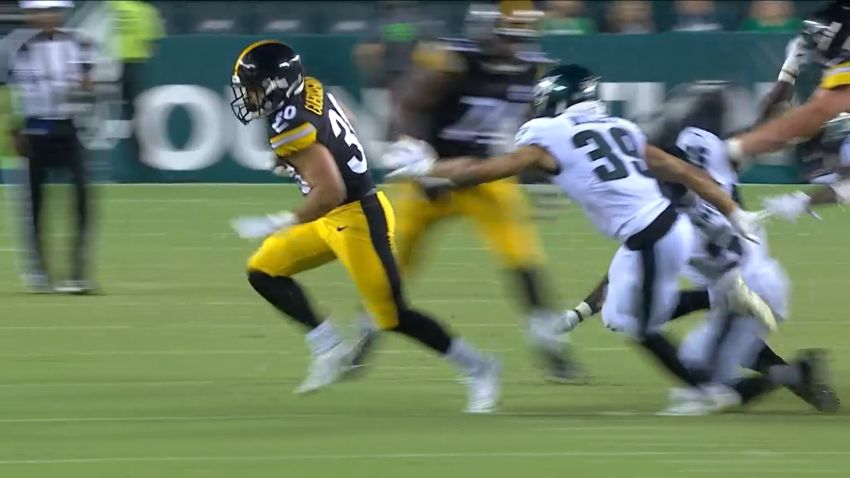 Considering the Steelers’ struggles to move the ball on the ground last year, it was a welcome sight to watch the offense have more success in that area last week, even if it came in the fourth quarter of a preseason game.

But the late-game efforts of young running backs such as Tony Brooks-James and Pete Guerriero will put their name on teams’ radar. And if nobody else picks them up, they could be ideal candidates to land on the Steelers’ practice squad.

Brooks-James is a name with which we are already familiar, as he actually spent a brief period of time on the 53-man roster a few years ago, but Guerriero, a 2020 college free agent out of Monmouth University in New Jersey, is new.

Unsurprisingly, they didn’t play last year, such a small school during the pandemic, but Guerriero, ‘The Jet’ according to his Twitter handle, rushed for nearly 2,000 yards during the 2019 season, leading all of FCS, with 18 touchdowns. He rushed for nearly 4,000 total yards in his three-year college football career, averaging 6.5 yards per carry with 35 scores.

It’s no surprise that he struggled to get a look last year, and that the one team who eventually did give him a look was the nearby New York Jets. He first signed in late August during training camp, but was cut a few days later. He would eventually spend time on the practice squad in December, and signed a Reserve/Future deal, but was cut after the draft.

He remained unsigned since then, but his first time on an NFL field during a game, he offered a flash of his potential with his 4.49-second speed. The numbers—20 yards on seven carries—don’t tell you how he looked on the field, and he had one positive run, converting a short-yardage situation, that was wiped out by a holding penalty, as well.

Still, the Steelers are deep at running back, with Najee Harris a lock to make the team and Benny Snell, Kalen Ballage, Anthony McFarland, and Jaylen Samuels all vying for a spot on the 53-man roster. Whoever does not make the cut, provided they are unclaimed off waivers, would likely be favored for a spot on the practice squad.