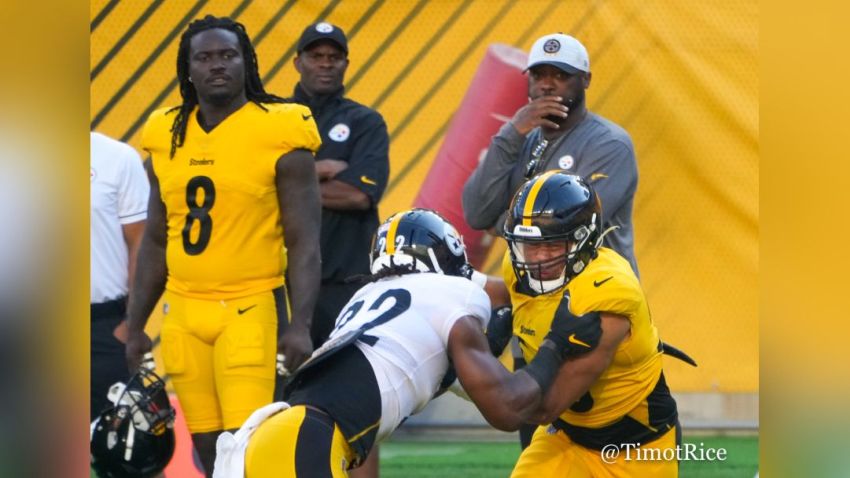 The last few days of training camp at Heinz Field for the Pittsburgh Steelers have brought a lot of additional hype for rookie running back Najee Harris.

From catching passes one-handed to ripping off impressive runs in team sessions, Harris looks like the real deal. Where he truly seems to be making his mark — and taking some lumps in the process — though comes in the backs on ‘backers drills, where he’s more than held his own against some linebackers, but has also struggled in recent days against Alex Highsmith and Marcus Allen, learning quickly what it takes to hold up in pass protection in the NFL with defenders just as big as he is.

Though the struggles have been present recently in the drill, Harris isn’t focusing on the wins and losses in the drill. Instead, he told reporters Saturday that he’s focusing on his technique, all while embracing the competition, which has caught head coach Mike Tomlin’s eye.

“So, what I try to do is I try to go up against everybody, you know?” Harris said. “‘Cause, you know, everybody comes in all shapes sizes. Someone’s bigger than others, some are smaller. So what I try to do is I go up against a lot of guys so I could try to use more technique and not so much as like, your God gifted [abilities]. So, me picking out all the guys, me wanting to go up against D-ends and stuff like that…it’s teaching me mentally to use better technique. So that’s why you see me out there pointing out or yelling out for bigger guys and stuff like that, just talking, get that rep. So in game, you know, wouldn’t be something new to me.”

Harris’ technique coming out of Alabama was already pretty solid in pass protection, but there’s a clear drive to be the best all-around running back in the game with Harris, which has him honing in on his technique, hand placement and base in pass protection during training camp and the preseason, including calling out bigger teammates to challenge him.

That alone, with a rookie first-rounder and next face of the franchise calling out teammates and wanting to be challenged is fostering that environment of competing that Tomlin has chased for years.

“I talk to [Coach] Tomlin every day before practice to say like, listen, I want to go up against bigger guys,” Harris said. “And he understands. ‘Cause you know, he likes to compete. So you know, every now and then he might say ‘no, no, hold on,’ but for the most part he’s like, ‘yeah, for sure, you can do whatever you want.'”

I give major props to Harris here. While he is a first-round draft pick and a budding star already, he’s a competitor at heart and wants to get after it in backs on ‘backers in training camp. That shows a lot about his demeanor and what truly drives him.

The Steelers have a great one on their hands, one that should help hold the franchise to the standard that’s been set in past years.