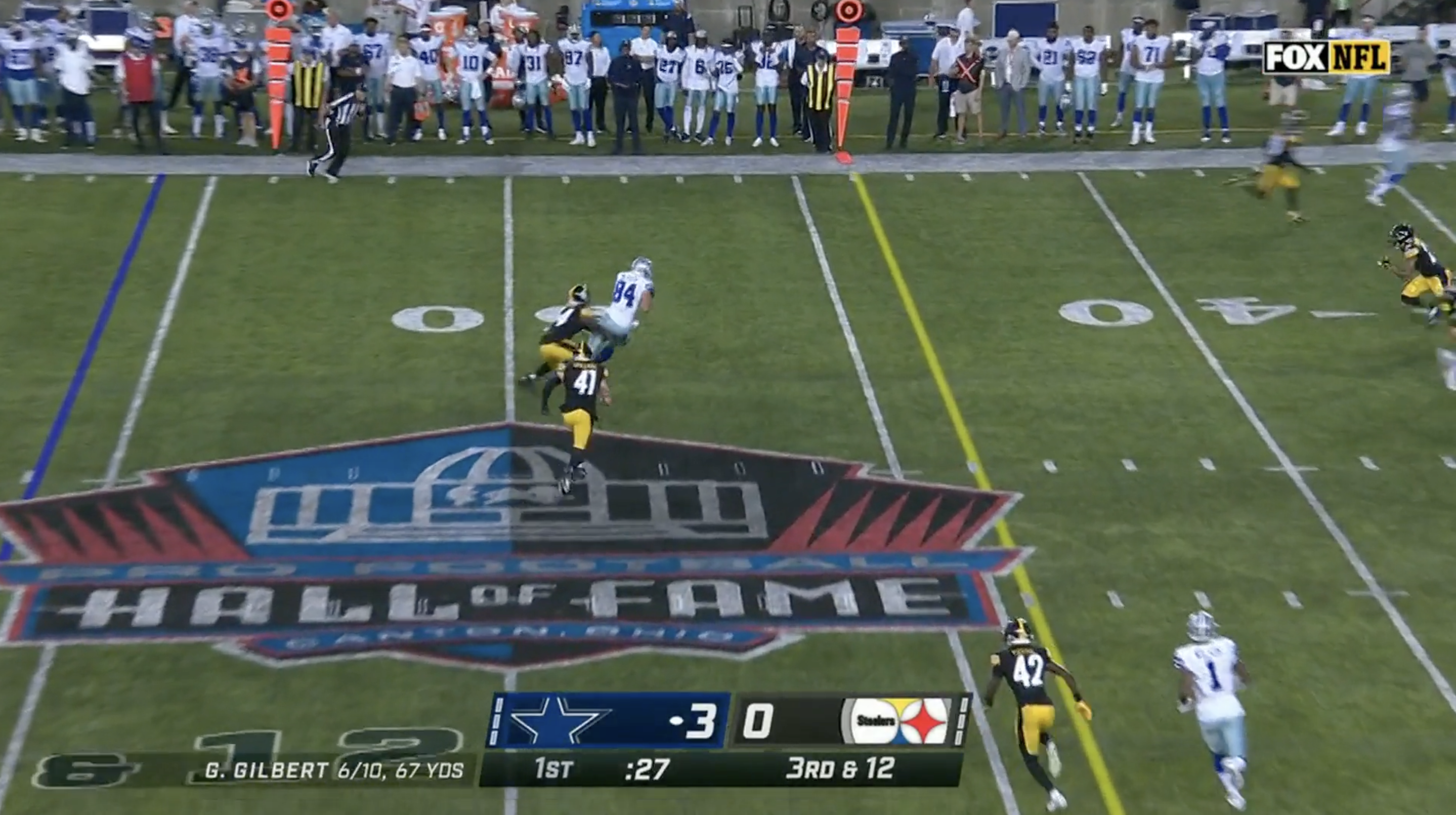 Just like that, we’re back into the full swing of things here at Steelers Depot when it comes to season coverage.

Following Thursday night’s Pro Football Hall of Fame Game, the crew here continues to crank out great piece after great piece dissecting the win over the Dallas Cowboys to open the preseason. Today, I’ll try and add to the well-oiled machine that is the site with my traditional missed tackles report coming out of the matchup.

In Thursday’s game I was expecting a lot of sloppiness in the tackling department from the Steelers, considering all the young players that were going to see the field against the Cowboys. In my live viewing, there were few misses that stood out live, and that held up through my second and third time back through the game as the Steelers missed just five total tackles on the day.

As per usual, I’ll break down the misses with the miss percentage from each guy, and I’ll also take a look at the forced missed tackles from the offensive players against the Cowboys.

I’ll start this report off highlighting the miss from Ulysees Gilbert III late in the first quarter on Dallas Cowboys tight end Sean McKeon, which came on a third and 12 near midfield and should have been a short catch and stop, leading to punt.

Instead, Gilbert went into the point of contact rather passive and didn’t fully wrap up on the play, in which he was in tight coverage on.

In a game in which he got a lot of run at inside linebacker ahead of season in which he’s running out of time and opportunities, this was not a good start for the third-year linebacker, who finished with three tackles on the night, including a quarterback hit. He has all the tools necessary to be a solid depth linebacker and terrific special teams player, but plays like this won’t help his case, especially in third and long situations where the offense converts because of his miss in space.

Defensive tackle Isaiah Buggs had a strong night as a run defender and pushed the pocket at times rushing the passer, but he did record a missed tackle in the win, which came against the run on a play in which he won quickly and was in the backfield looking to make play.

Buggs does an awesome job swimming and penetrating to shut down the run play, but he misses on the tackle attempt in the backfield one-on-one, a situation he should win often in when it comes to making a stop. Fortunately for Buggs, he had a couple of teammates clean up his miss quickly, holding the Dallas running back to a gain of one.

As for rookie safety Tre Norwood, I spent much of the offseason following his selection in the sixth round of the 2021 NFL Draft talking about my concerns with the Oklahoma product and his struggles with run fills, physicality and overall tackling abilities. That reared its ugly head Thursday as Norwood was caught backpedaling on Dallas’ Sewo Olonilua’s catch-and-run in the second quarter, and then Norwood missed a big tackle on a run fill in the second half.

You can see him on the left edge of the screen creep up early in the rep, reading run quickly. From there, it’s a mess for Norwood.

He takes a poor angle to start when closing downhill on his run fill and then is very passive trying to go in for the stop, which matches his college tape. Norwood is big on throwing a shoulder or going for an arm tackle, which occasionally worked in college. That’s not going to cut it in the NFL.

He has great ball skills, but his tackling leaves so much to be desired, which will hinder his chances of making the 53-man roster at the end of training camp.

Ray-Ray McCloud received a lot of run at wide receiver Thursday night, especially out of the slot, where he caught two passes for 12 yards, including this 9-yard gain to move the chains.

We know McCloud is a jitterbug, as evidenced by his 31 total forced missed tackles last season with the Steelers, of which 23 came as a return man. If McCloud is going to have more of a role on the offense under Matt Canada, he’s going to need to create more after the catch, so Thursday’s performance here over the middle in shaking the Dallas defender is a great step in the right direction.

As for Kalen Ballage, he really stood out in a big way in the backfield and recorded two forced missed tackles of his own, including this one against Dallas defender Luke Gifford one-on-one in the backfield.

He’s not flashy, but if he can do this as a depth running back and turn negative runs into positive plays, he’s going to continue to endear himself to the Steelers’ coaching staff in the preseason, carving out a role on the 53-man roster.