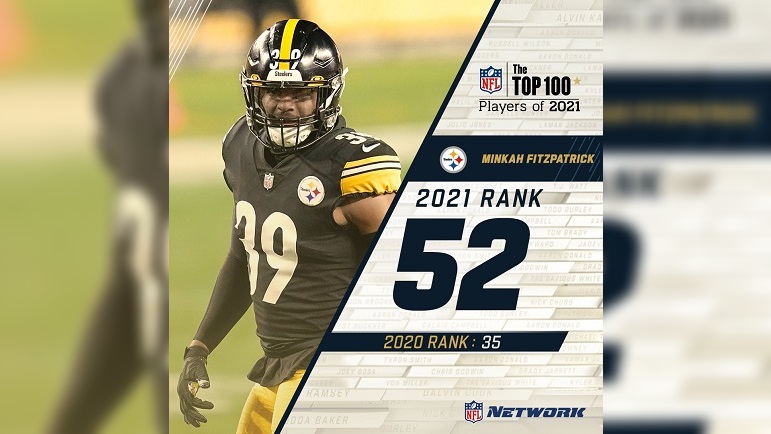 The NFL Network revealed players ranked 100-41 on Sunday night as part their annual Top 100 rankings show, and another member of the Pittsburgh Steelers defense was included in that set of 60 players for 2021.

Steelers safety Minkah Fitzpatrick is ranked 52nd overall in the Top 100 this year after leading the team in interceptions in 2020 with four and total tackles with 79. Fitzpatrick returned one of those interceptions for a touchdown as well. He also registered 11 pass breakups in 2020 to go along with a forced fumble and a fumble recovery. Fitzpatrick was voted a first-team All-Pro and Pro Bowler again after the 2020 season ended and he is now unquestionably established as one of the best free safeties in the NFL entering the 2021 season. The Steelers unsurprisingly picked up Fitzpatrick’s fifth-year option for the 2022 season this past offseason.

This marks the second time that Fitzpatrick, who was originally selected by the Miami Dolphins in the first-round of the 2018 NFL Draft out of Alabama, has made the NFL Network’s Top 100 players list as he was ranked 35th overall a year ago.

The Steelers acquired Fitzpatrick in Week 3 of the 2019 regular season via a trade that included Pittsburgh giving up their first-round selection in the 2020 NFL Draft.

With Fitzpatrick and defensive tackle Cameron Heyward now on the Top 100 board for 2021, that leaves Steelers outside linebacker T.J. Watt as the likely lone remaining Pittsburgh player left to be ranked. Earlier on Sunday, it was revealed that Heyward is ranked 57th overall in the Top 100 players for 2021.