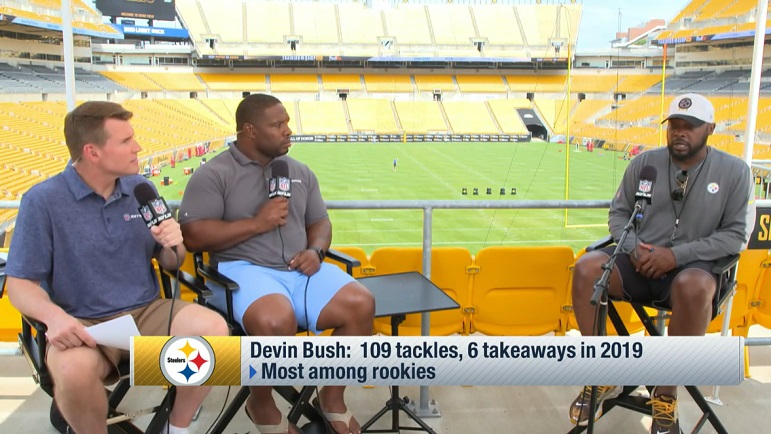 The Pittsburgh Steelers second preseason game of 2021 will take place Thursday night against the Philadelphia Eagles and that exhibition road contest looks like it will mark the return to the field of inside linebacker Devin Bush.

During a Sunday morning interview on the NFL Network, Tomlin indicated that Bush, who did not play in the Hall of Fame Game this past Thursday night against the Dallas Cowboys, is scheduled to play against the Eagles this coming Thursday night.

“This is going to be a big week for him,” Tomlin said of Bush. “He’s scheduled to play in the game in Philadelphia and so that first in-game action is going to be significant. You know, he’s been competing out here and so I’m excited about getting him back into the fold and just watching him get back in the middle of the things, be a hub of communication, be a sideline-to-sideline guy that we all know he’s capable of being.”

Bush suffered a torn ACL in Week 6 last season, and his surgery took place not long after that game against the Cleveland Browns. The Steelers former first round draft pick out of Michigan is expected to be the quarterback of the defense in 2021 and Tomlin talked about what a big deal it is to get Bush back in the defense in 2020 and how the young linebacker has done throughout his rehab process.

“He’s significant, man,” Tomlin said of getting Bush back this season. “We moved up one time in the draft in the 15 years since I’ve been here to draft somebody in round one and that’s Devin Bush. And so, he wears that responsibility well for a young guy. It was an adjustment when we lost him. It’s good to have him back out there but getting back out there is a process and he’s done a good job at each component of the process.”