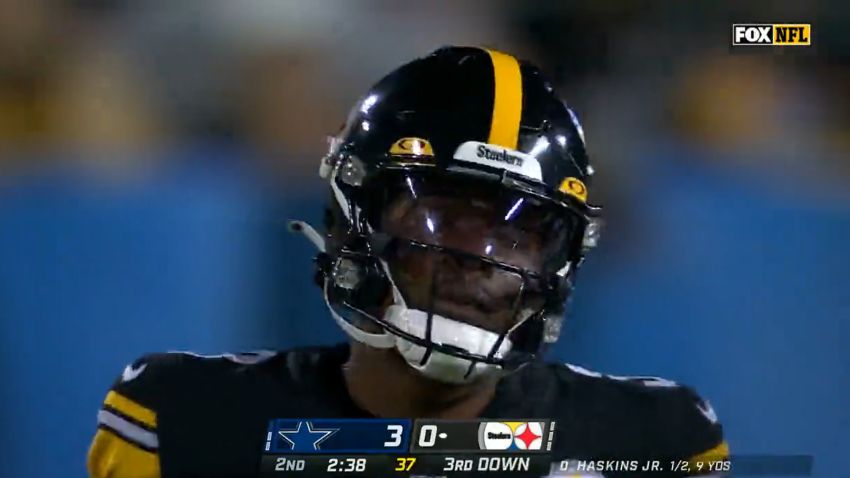 Anybody watching the preseason should be prepared to see some pretty unremarkable football, for the most part. A lot of the game will be played by those who will be playing backup roles when the seasons starts, if they have the fortune to be on a roster at all. In other words, take what you see with a grain of salt.

But while Dwayne Haskins may not have put up impressive numbers during his preseason debut with the Pittsburgh Steelers, he did show enough that his head coach, Mike Tomlin, came away from it impressed with what he offered, coming in as the second quarterback behind Mason Rudolph.

“I liked his demeanor. I thought he was a really good communicator. I thought he was really present and kind of cerebral the way that you like the quarterback position to be”, he said of Haskins after the game. “But it’s so much ball in front of him and the others”.

“That’s why it’s important, man”, he said of the opportunity to get inside of stadiums for the preseason. “We were excited about participating in this game, man. We’re going to particularly use that as an added opportunity to gain some exposure to these quarterbacks”.

At the end of the day, Haskins completed eight of 13 pass attempts for 54 yards, averaging just 4.2 yards per attempt, with no touchdowns or interceptions, though he, and Rudolph, both suffered from a couple of drops from their receivers. Haskins also had a five-yard scramble.

The Steelers have three quarterbacks behind Ben Roethlisberger in training camp with them, Joshua Dobbs being the other. Based on practice reports, it seems pretty clear that Haskins had been the one having the most success.

Outside of a deep connection with Chase Claypool, Rudolph didn’t do much to change perceptions of his early camp struggles, either. He finished the game completing six of nine passes for 84 yards, 45 of which came on that one play to Claypool. As for Dobbs, he completed four of six for 37 yards, including a touchdown pass to Tyler Simmons.

There’s still plenty of practice and three more preseason games to go, but I’m not sure tonight’s performance really moved the needle for anybody with respect to the jockeying for position in the quarterback room.

I do think we will see that there is a competition for the number two quarterback position, and it will not be surprising if Tomlin has Haskins start a game or two. It will help out all of the quarterbacks, though, if they could start to get their offensive line healthy.