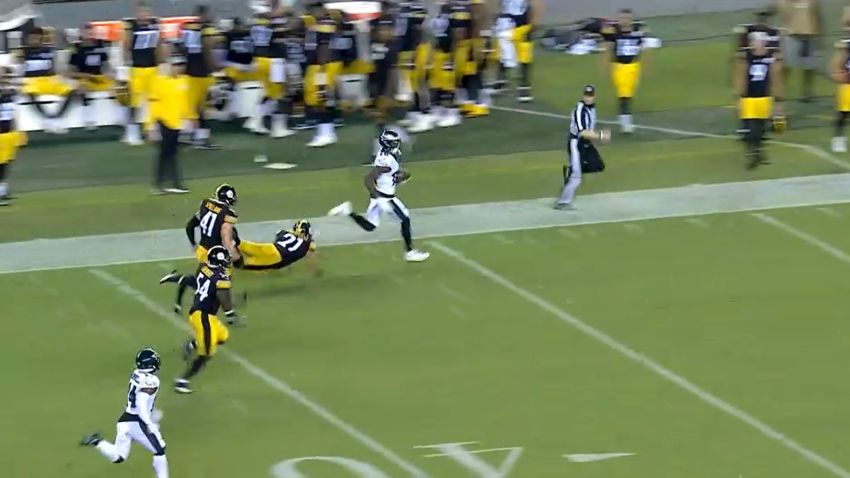 For some, watching Philadelphia Eagles’ backup quarterback Joe Flacco carving up those defenders in the black and gold throughout the first half Thursday night likely brought back some painful memories.

Flacco threw for 178 yards and a score on Thursday night against the Steelers, carving up underneath coverage throughout the night. Despite some of those successes through the air for the Eagles, Pittsburgh Steelers’ head coach Mike Tomlin is not concerned with the performance defensively against the pass in preseason games.

“I’m not overly concerned about it right now,” Tomlin said following Thursday night’s game. “Our defensive menu’s kind of on a notecard. We’re not trying to trick anybody. We wanna see who can rush, who can cover. So from a quarterback standpoint, in terms of diagnosing it, we’re not challenging them intellectually. They were hit some plays. We’re okay with that because we wanna evaluate our guys. Sometimes when you’re tricking quarterbacks, you’re not evaluating your guys. Tonight we faced a veteran guy like Joe Flacco, who came in with that second unit. Okay, you’re playing against Joe Flacco with a notecard ready list; he’s gonna do some things. We’re okay with that. Our emphasis is to evaluate our guys.”

So far, there’s been plenty of chances to evaluate the way guys can rush and cover. Thursday night showed guys like Justin Layne and Lafayette Pitts can move the needle some from a coverage perspective as the two recorded interceptions in the win, while guys like Jamir Jones, Isaiahh Loudermilk and Quincy Roche recorded sacks against the Eagles.

Guys have certainly struggled in coverage throughout the preseason and training camp, such as inside linebacker Robert Spillane, which may have led to General Manager Kevin Colbert making a move for veteran linebacker Joe Schobert via trade from the Jacksonville Jaguars Thursday night.

While the big plays through the air against the Steelers’ defensive units in the first two preseason games can be a bit concerning for fans and media members, it is important to read into exactly what Tomlin said. It’s a vanilla defensive scheme designed for guys to just go out and play.

If the coverage struggles continue into the 2021 regular season, it could be time to panic. For now though, it’s simply preseason games and the Steelers are clearly in the evaluation period.