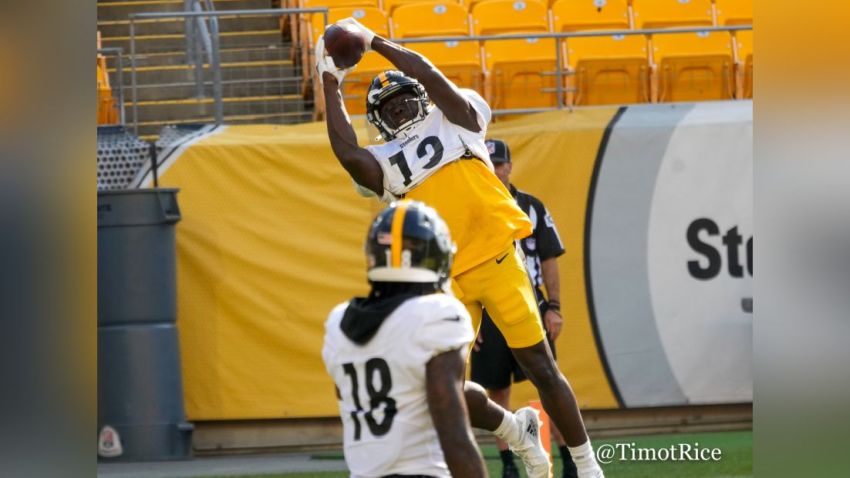 No matter how pass-centric the NFL becomes, it will never be easy to accept the role of a number four wide receiver. In just about any offense, you’re going to spend a lot more time on the sideline rather than on the field, even if you’re on a team that likes to rotate, because you still have to account for the playing time of running backs and tight ends.

That’s why the report of Pittsburgh Steelers’ fourth-year wide receiver James Washington requesting a trade was so believable, aside from the fact that it came from Adam Schefter, generally regarded as a credible source of information.

Whether true or not, Steelers head coach Mike Tomlin denied earlier today that Washington has either requested a trade or expressed dissatisfaction with his role on the team—though, of course, he only know what Washington may have said to him, and not to others.

But until something changes, he’s still a part of this offense, and first-year offensive coordinator Matt Canada talked a bit about what role he will play in it, when he was asked if it was difficult to find opportunities for the former second-round pick.

“I think he has a good role with us”, he said. “I think we are really talented in that room right now. Certain games are certain matchups, certain things happen. But James is a big part of what we do, and he will continue to have a role with us”.

In spite of perceptions, Washington did still play 486 snaps on offense last season, which is more playing time than most in such a role would see, though his playing time did dip pretty considerably in the middle of the season. He managed to catch 30 passes for 392 yards and a career-high five touchdowns, however.

The Steelers used a Day 2 selection on the wide receiver position four years in a row, starting with JuJu Smith-Schuster in Round 2 in 2017. Diontae Johnson was an early third-round pick in 2019, and Chase Claypool is the most recent addition, their top pick a year ago at 49th overall.

All three of the aforementioned have more immediately commanded more playing time than Washington, with either their route-running and ability to get open or their explosive big-play threat. They all received at least 100 targets in the passing game.

Quite simply, Washington is hard to get on the field because it’s hard to take any of them off the field. And then you have to factor in Eric Ebron, Pat Freiermuth, and Najee Harris, as well. It remains to be seen what this “good role” he may have in Canada’s offense, which has yet to reveal itself, but, again, the report of his being less than satisfied with said role is certainly believable just based on the circumstances.