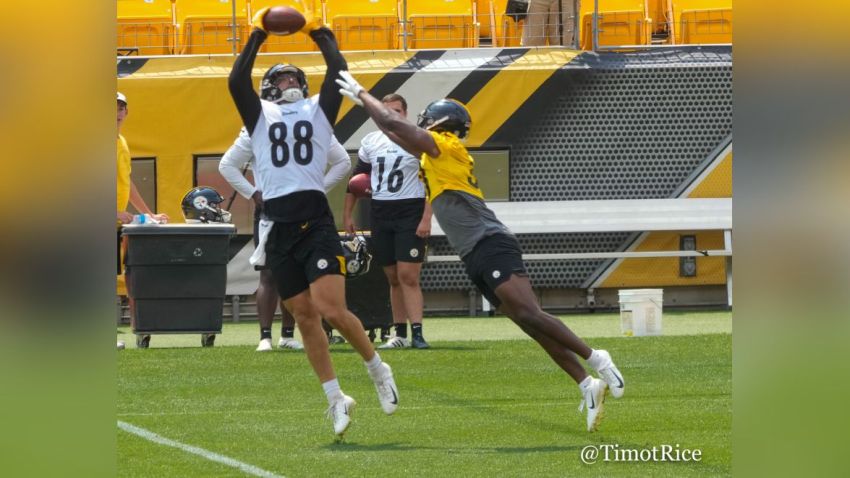 The Pittsburgh Steelers have added top-60 selections, over the course of the past two drafts, to all three of the offensive skill positions. They drafted wide receiver Chase Claypool 49th overall last year, before selecting running back Najee Harris in the first round in April. They stayed on offense when they moved into the second round, with the long-awaited addressing of the tight end position, with Pat Freiermuth.

Though a shoulder injury caused the team to err on the side of caution and hold him out of the preseason debut Hall of Fame game, the big man out of Penn State has been impressing his coaches and teammates since rookie minicamp, particularly as a receiver, though he is developing as a blocker.

He has attributes, his coaches believe, that will allow him to contribute right away, even though they still have Eric Ebron to man the tight end position. First-year offensive coordinator Matt Canada said on Saturday that he was “really pleased” with Freiermuth’s football QB and talent.

“He has done a great job learning our offense, being where we need him to be”, he said. “I continue to watch him grow and come along. I’m excited to watch what he will do this fall”.

The sudden, though unsurprising retirement of Vance McDonald shortly after the 2020 season ended left the Steelers with a clear and obvious need at tight end. Many thought that they would bring back former Steelers Jesse James when he was released by the Detroit Lions, but they never appeared to show interest in him, despite remaining available for an extended period of time.

Pittsburgh did not use a single draft pick on the tight end position inside of the first four rounds since 2007, when they drafted Matt Spaeth in the third round, until the selection of Freiermuth this offseason. They did, however, have Heath Miller (and Spaeth) for most of that time, and supplemented via free agency (Ladarius Green, Ebron) and trade (McDonald) after Miller retired.

Potentially, the duo of Ebron and Freiermuth could make up the most talented tight end tandem the Steelers have ever had, particularly as pass-catchers. It really all depends on how they are used, but with the talent and numbers that they have at wide receiver, it may be hard to run too many pass-oriented plays out of 12 personnel.

It’s on Freiermuth to prove to the coaches that it’s in the team’s best interest to do just that, to show that he is a matchup problem who can produce—both in tandem with another big body like Ebron on the field, and as the lone tight end on the field.

While he was held out of last week’s game, the fans should get their first good look at him this week as the Steelers face the Philadelphia Eagles for their second preseason game. Hopefully his talent and football IQ will be on full display.