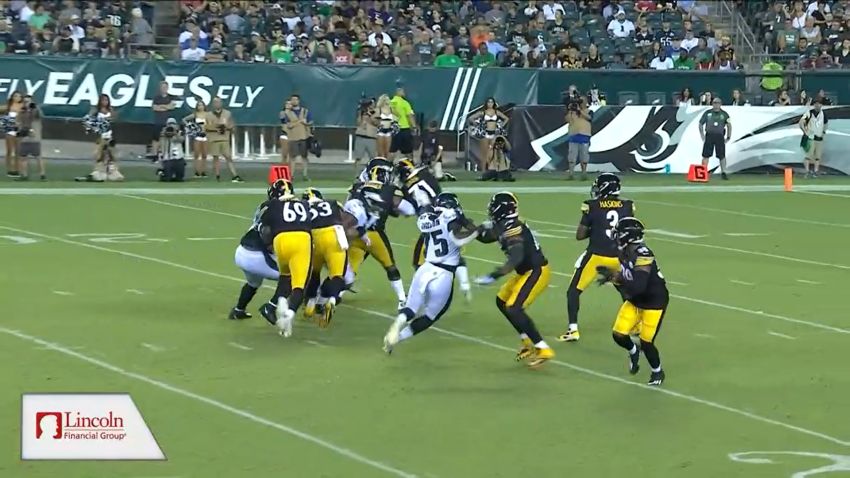 One of the storylines Pittsburgh Steelers fans have been most eager to follow during training camp has been where Kevin Dotson is and what he is doing—and with whom. The second-year guard spent the first couple of weeks as an observer, overcoming a lingering ankle issue.

When he got back on the field, he was working with the second-team offense, and even came in after the starters (though before most of the starters exited) during their second preseason game. But he was generally regarded to have played quite well, and has been back with the starting lineup this week.

Matt Canada, the team’s first-year offensive coordinator, was asked to assess the play of his young guard, who remains projected to start on the left side after starting four games in total last season.

“He was a little rusty early”, Canada acknowledged (the team has not made video of the interview available), but “as the game wore on and his playing reps wore on, you saw him get a little bit better and work some of that out. Obviously, he was nicked up, as you guys know, and missed the first one, but I saw him knock the rust off early. We were pleased with it. Obviously, we want to continue to improve it”.

While that is pretty muted praise, it’s certainly more of a bone than head coach Mike Tomlin has been willing to offer him since he got back on the field, first explaining his lack of starter reps as being a player who hasn’t earned them, and then handwaving his first-team reps a week later, saying that he wouldn’t anoint him just yet.

A fourth-round pick in 2020, the Ragin’ Cajun has been a fan favorite since he was drafted, which wasn’t hard given his gregarious personality and cove of Steelers merchandise that he already had on-hand as a personal fan of the team.

He wasn’t a big fan of hearing his coach’s words being fed back to him on Twitter, but he grew to understand the remarks after he got a chance to actually see how they were said, rather than how they were framed by others.

By all accounts, he appears to have fully embraced any challenges the coaches have set in front of him as they seemingly try to keep him motivated to push himself to be the best offensive lineman that he can possibly be.

There is every reason to anticipate that Dotson will be out on the field on Saturday night at Heinz Field with Ben Roethlisberger under center, and that that should remain the case for the remainder of the season. He’s knocked the rust off. Now it’s just playing and growing.