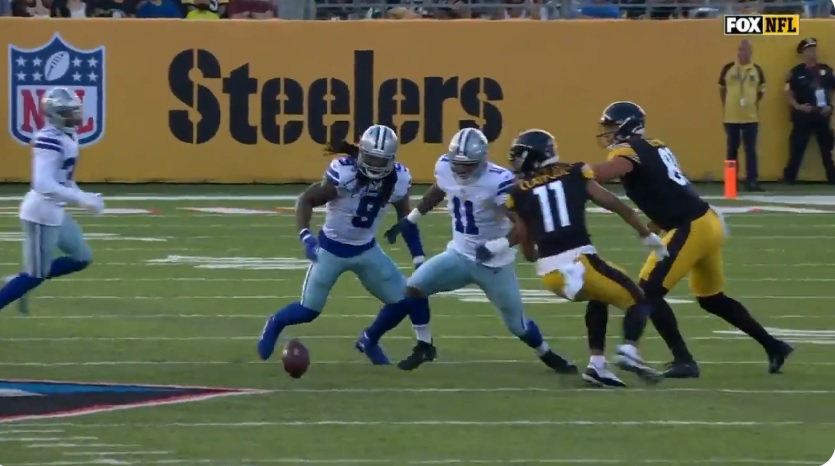 For the past several seasons, the Pittsburgh Steelers have been the NFL’s slowest starters on opening drives. 2021 hasn’t gotten a whole lot better. Though it was just preseason action and ultimately, absolutely meaningless, the Steelers turned the ball over. Motions and sweeps a new focal point under Matt Canada, Rudolph tried to hand the ball off to Chase Claypool on a sweep to the right. The handoff was botched, fumbled, and recovered by Dallas’ first-round rookie Micah Parsons.

After the game, Rudolph took the blame for the play.

“It was supposed to be handoff,” he told reporters post-game. “And so I just got to do a better job getting into the sweet spot, his bread basket. And getting him the ball around.”

Canada’s offense was very much on-display, especially early in the game with the more established players. Lots of pre-snap motions, trades, and window dressing. That led to success but it has an obvious downside. It creates more chaos for the defense and offense and the potential for negative outcomes, like botched handoffs.

All things to be ironed out over the course of the preseason. The good news is there is a preseason and the Steelers are one of just two teams to have four exhibition contests to iron things out.

What’s most relevant here is Canada will pull the Steelers from a bottom-third motion rate, 23rd last season, to an offense that’s destined to finish in at least the top ten, maybe even the top five. A guy like Claypool could have a big role on these types of runs, a freak athlete who will be dangerous in space. Claypool had one jet sweep carry in training camp, going 40 yards off the left side.

Hopefully, Pittsburgh will have more plays like that one than what they had tonight.