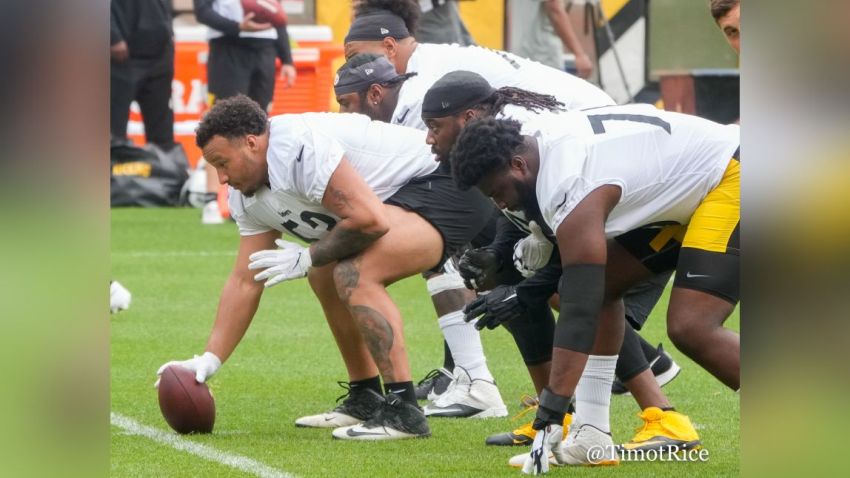 Following a week of training camp practices and the preseason opener, it’s long past due to update my pre-training camp roster predictions. And it looks fairly different than the first edition.

Here’s my updated 53-man projection with gameday inactives and a 16-man practice squad. As always, let me know your thoughts in the comments below.

Analysis: No changes here. Still have these three in this order. Haskins could push Rudolph if he plays really well the next three games but nothing that happened Thursday substantially closed the gap. Haskins has had a good training camp but Rudolph’s been here for four years. Longer resume, more trust, and the team gave Rudolph a one-year extension for a reason.

Analysis: Ballage replacing Jaylen Samuels, who is phasing out of this offense. Just need to make sure Ballage’s injury isn’t serious. He wasn’t on the field Sunday, though he was out there Saturday walking around seemingly fine. Ballage has strong backup value as maybe the best pass blocker on the team, a competent receiver, and multi-phase special teamer (wing on punts, upback on kicks, etc). Snell’s spot is feeling less secure than it did at the start of camp. Good news is he should be back from his injury sooner than later. McFarland could see some Pony looks with Harris.

Analysis: With good health and a new OC, Watt should have an increased role offensively, though it’ll still be tied to game flow and circumstance.

Analysis: Keeping the same five as before. Moderate buzz about some of the young guys but no one seriously pushing for the 53 right now. Think the team holds onto James Washington. Practice squad battles should be really interesting. Couple worthy candidates.

Analysis: Rader still beating out Zach Gentry. Gentry’s improved as a blocker and his size makes him a unique threat as an above-the-rim player. But he’s not as good a blocker as Rader and the Steelers have two pass-catching tight ends and a whole bunch of weapons for Ben Roethlisberger to throw to. So Gentry’s size advantage is nerfed. Rader is also the better special-teamer.

Analysis: No changes here. Okorafor still poised to be to be the starting left tackle, despite speculation to the contrary. Banner at right tackle, Haeg the swing man.

Analysis: One change here, Hassenauer on the roster, Finney off it. Similar players and skillsets but Finney felt like the emergency vet signing to protect them heading into the draft in case they didn’t come away with a center they really liked. They like Green, who should open the year as the starter. Despite size limitations, Hassenauer is just a more physical player.

Analysis: Hardest decisions along the D-line and this battle still feels wide open. Loudermilk has been talked up during camp and played well, including in Thursday’s game. I think he makes the team based off that play alone before even considering draft status (though that doesn’t hurt, either).

Analysis: Davis narrowly edging out Isaiah Buggs. Just feels like the coaches trust Davis a little more but Buggs is the most talented backup big. So I’m not closing the door on him or even Henry Mondeaux.

Analysis: Marsh overtaking Roche as the #4. Marsh has been running second team while Roche has been with the 3’s. Much more comfortable with him as the #4 than #3. Good special-teamer who is having a snap camp, routinely getting pressure and holding his own against the run, granted largely versus backup tackles.

Analysis: Same group here. UG3 hasn’t had a great or terrible camp but I think they keep him around as an athletic off-ball player. Can’t have too many of those in this league.

Analysis: Another tough battle here. Moving Brooks from safety to corner because that’s all he’s played — slot corner. I was going to easily have Brown off this list prior to Thursday’s game. But he made a big impact on special teams and the kick coverage unit. Showed the physicality Keith Butler talked about. So for now, he’s the #6 corner.

Analysis: Safety definitely feels light, though I don’t know what internal option you could add here to feel significantly better about the group. Killebrew is a short-term starter, solid backup option and should be an excellent special teamer. Good-size, physical, wrap-up tackler. Norwood needs to display more consistent play, he’s far too high-variance right now, but his instincts and ball skills are hard to discard. Something worth trying to develop and he’s not a scared, no-desire tackler.

Worth mentioning some of those corners can play safety, too. Sutton, Maulet, Brooks. So this group isn’t as thin as it may read.

Analysis: Sam Sloman can Charlie Brown the rest of his preseason kicks. I don’t care. Keep Boz on the sideline, get him ready for Week 1.

Analysis: Jordan Berry has enjoyed a solid camp, I don’t want to pretend this battle is a TKO, but Harvin is a bigger weapon — figuratively and literally — and it’s hard to cut a draft pick who is really enjoying an impressive summer. Longer-term option so the Steelers aren’t playing musical punters every summer.

Analysis: Canaday has been used like a vet whose roster spot is locked in. Hasn’t had to work much in camp, letting Christian Kuntz soak up reps.

Analysis: I admit I am very heavy on the defense here. Ten there, only six on offense (the league is keeping its 16-man practice squad from last year, if you’re wondering). But just feels like there’s more talent towards the bottom on defense, especially with some young, promising DBs. Hold on to as many of those guys as you can knowing Joe Haden and Terrell Edmunds are entering the final year of their deal (not to mention Cam Sutton a free agent after the 2022 season).

Roche is the only draft pick not to make it but he lands on the practice squad alongside Jamir Jones, who is really enjoying a solid summer. Edmunds sticks around for some baseline versatility. RB, FB/wing, and special teams. Johnson is highly versatile, Sexton is a backup return option, while Gentry has played well enough to stash.

Collins is a good athlete and Leglue can play center, guard, or tackle. Collecting all the defensive linemen, including Anderson, who I can’t help but root for. Nine defensive linemen on a team is probably one (or two) too many though. Bundage is a good athlete, Denmark and Gilbert long corners, while Wade and Stiner have made plays on the football.