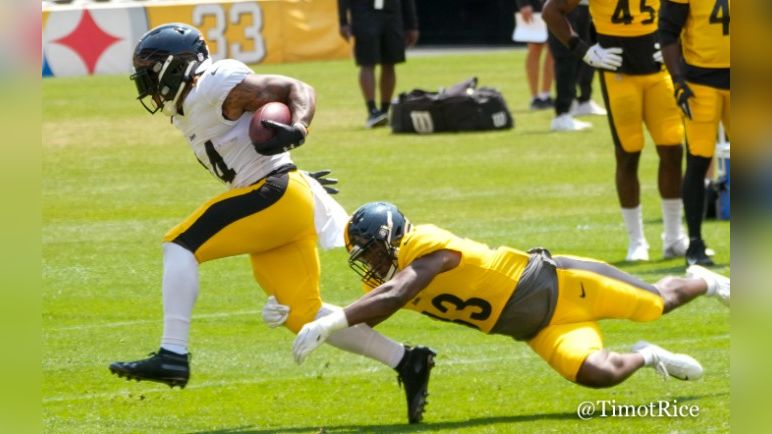 My final Pittsburgh Steelers’ 2021 roster prediction. The Steelers have already cut their roster down to 71 though no one in that initial wave had a serious shot of making the main roster. To get down to 53, they’ll have 18 more cuts to make by Tuesday at 4 PM/EST.

These will be my final predictions of what I believe the team will do, not necessarily what I would do if Kevin Colbert made me GM for a day.

If you’d like to look back, I’ll link each of my previous predictions throughout the offseason. As always, let me know your thoughts in the comments below.

Analysis: Never made any changes to these three or their order and was never super tempted to. Haskins needed a near-perfect performance in the preseason finale to become the #2 behind Roethlisberger. Clearly, he fell far short. Rudolph should be the #2 with both guys probably in the mix to start in 2022, assuming #7 hangs up his cleats.

Analysis: Deciding on the running back situation ended up being my toughest decision of the entire roster. Running back could go in a lot of directions. They could keep three with Snell, three with Ballage, or four with both. It’s all on the table.

Ultimately, I have the team keeping four. Generally, they’ve kept three over the past decade when they’ve had a bell cow runner like Le’Veon Bell to play 85% of the snaps. Harris should do similar this season. Tomlin, for better or worse, loves Snell, who returned to game action and had a decent performance (relatively speaking) in the finale. Ballage enjoyed a good camp and personally, I think has a better slightly skillset than Snell.

Definitely wrestled with this one though. If I had to guess at only one running back, it’d be Snell.

Analysis: These have been the five and no one’s spot was truly threatened. McCloud didn’t have a good performance as a receiver in the finale but that’s not his job. He’s on the roster to return kicks and punts and do both at an above average level. There’s four guys ahead of him plus a couple of tight ends and a running back more important and involved in the passing game.

Analysis: No change from last time. I don’t think the team has all three tight ends active on gameday, as was the case to begin last season, which reduces Rader’s value and importance on the team. On paper, Gentry does have more upside with his size, length, and downfield ability when he’s asked to run in a line.

Analysis: No other tackles within the organization to push these four. It’s really a question of if Moore Jr. is comfortable enough at right tackle to get the gameday hat over Haeg. Haeg is the vet and a pretty good run blocker, though I don’t know how much tackle-eligible this team will use under Matt Canada. Haven’t seen really any of it this summer so it’s shaping up to be a lot less than the last two seasons.

Analysis: Rashaad Coward becomes odd man out as I’m back to the Steelers keeping nine offensive linemen instead of ten. Coward has good size, power, and plays with aggression, but he’s a major developmental guy and that’s if he ever ends up getting there. Waiving guys on the o-line can be risky in a league always looking to snag those guys but he’s the definition of a practice squader, even if he has a fair amount of NFL snaps under his belt. Finney becomes the top backup at both guard spots with Hassenauer the top center backup.

Analysis: No change with these four. Loudermilk needs a year but his power has improved, he’s got a good football IQ, and his motor is very good. Where it needs to be to play along this defensive line. He showed the traits that made the team trade up for him.

Analysis: Making the semi-radical decision to keep seven defensive linemen. Decision is two-fold. One, it’s worth it. D-line is the deepest position on this team. Keeping seven is unusual but it’s bad business to cut more talented players for lesser ones. Buggs and Davis have done their job this season and Buggs was one of the lone bright spots in Saturday’s finale, stepping up against the Panthers’ starting unit.

Two, Stephon Tuitt’s situation is cloudy and even if he is healthy enough to play Week One, there’s clear questions about his conditoning and overall readiness. Doubt he can play 60+ snaps out of the gate. Buggs isn’t necessarily the next man up for that role but he’ll offer depth and a helmet if it turns out Tuitt isn’t ready to go.

Analysis: You’re just in time, Jamir Jones. If his summer performance isn’t enough to make the roster, I’m not sure what more the team could’ve asked of him. Sacks, tackles for loss, run stops, and a team-high six special teams tackles in four games, he fits well as a #4 on this team and bumps Cassius Marsh to the practice squad as insurance incase Jones’ regular season action isn’t as impressive as his preseason work. Jones, of course, won’t play on defense and will work on special teams to begin his career.

Analysis: Question mark here is Marcus Allen’s hamstring injury. Those can linger for a couple weeks. But if he’s ready for Week One, he should make the team and get a hat as the team’s starting upback on the punt team. Johnson’s likely to begin the year as a weekly inactive while Spillane will fall back into his old role of a four-phase, core special teamer. And a darn good one.

Analysis: Feeling pretty confident this team will add at least one outside DB (slot corner and/or free safety type), which will shake up how the rest of this roster looks. My guess the Steelers drop a RB in expense for that DB.

But I’m keeping my projections to just who is currently on the roster. None of the UDFA corners have done enough to warrant a spot here. Layne, to his credit, has while Maulet can be a backup slot/free safety and possible dime defender.

Analysis: Same four as I’ve had it for a long time. Depth here isn’t ideal at free safety and the team could look to add a guy. They definitely like Tre Norwood and with good reason but I don’t think he’s Day One ready.

Analysis: The only easy decision of the specialists.

Analysis: I wouldn’t be surprised by either direction the Steelers went. Harvin and Berry have done more than enough to be the team’s starting punter. But when your draft pick punts well, it’s hard not to keep him. And it would be nice to feel like there’s stability at the position instead or probably having the same questions about the team’s punter in 2022 (granted, punters are fickle and things can always change quickly). But make me choose and I’m landing on Harvin, whose elite-capable hangtimes win out.

Analysis: Again, tough decision between Kuntz and incumbent Kameron Canaday. Kuntz took advantage of his opportunity, playing the entire Panthers’ game due to Canaday’s illness. Kuntz snapped well and had 1.5 tackles on special teams. In the couple snaps I charted, I had Canaday down with slightly faster times, but also knowing how much Kuntz and Harvin have worked with each other this summer, I could see them being kept as the new snapper/holder combo.

Analysis: Considerable amount of changes here for the final prediction. I still don’t see any reason for Dobbs to accept a practice squad spot even though I’d love for him to. Edmunds makes the practice squad for his versatility. I’ve added Samuels here mostly because I didn’t know who else to add and I suppose he carries some scout team value as a “pass catching back” who can move around the formation.

16-man squad gives the team the flexibility to keep three wideouts. Johnson and White are similar players but both have done well while Sexton sticks around as an insurance to a McCloud injury. He still flashed this summer even if he fell apart in the finale. Rader should make it through waivers without issue to the practice squad. Coward lands on the practice squad after failing to make the 53. Leglue can play up and down the line and Green is vet tackle depth.

Mondeaux is an excellent practice squad defensive lineman who can come up to play special teams if need be. Marsh falls back on the practice squad while Roche’s pass rush tools are more than enough to keep him around. Brown is a slot option while Gilbert is a long corner on the outside. Stiner didn’t get many reps but had a decent camp and I like his size and tackling. Wade shows instincts and ball skills.