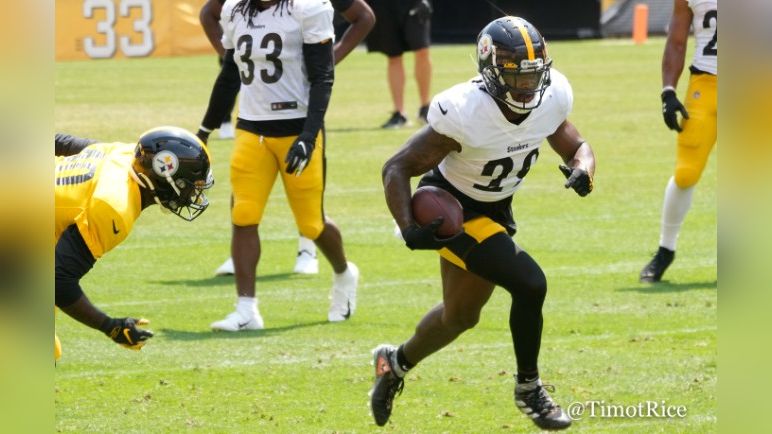 With the Pittsburgh Steelers’ third preseason game in the books, it’s time to update my 53 man roster predictions along with projecting out a 16-man practice squad.

My penultimate roster prediction. The final one will come shortly after the team’s final preseason game on Friday versus the Carolina Panthers. If you’re interested in what the previous version’s looked like, click here. There’s a couple changes to my roster this time around. Remember, it’s based on what I think the team will do. Not my ideal grouping.

Analysis: Status quo here. These three and in this order. Rudolph’s work leading up to the Lions game, out-repping Haskins by considerable margin, and the fact Rudolph ran ahead of him in the tune-up game tells me he’s going to be the #2 QB this season. Haskins will have to play a perfect game Thursday to challenge that.

Analysis: Making a move here by removing Benny Snell Football™ from this list. He’s going to have to do something to earn his roster spot. Starting with playing and playing well against the Panthers this Friday. Steelers could keep four RBs but with an every down back like Harris, there’s less incentive to keep that many. Ballage is a more explosive runner, a better receiver, blocker, and brings similar value on special teams.

Analysis: Watt will be your starting FB and perhaps #3 TE if the team chooses to keep only two active on gameday.

Analysis: Haven’t made a change to this group throughout camp. Mathew Sexton has done enough to earn a practice squad look. But not take McCloud off the roster, who can return kicks and punts, and does both well.

Analysis: Another change here, putting Gentry over Rader. Personally, I’d still take Rader, But this is a projection of what I think will happen. Gentry played over Rader versus Detroit (he had 11 snaps before Rader took his first) and played well, especially as a blocker in pass pro. This one could come down to the wire in the Panthers’ game.

Analysis: Some may argue to remove Haeg from this list. But there’s no real incentive to do say. Saves hardly any money, a couple hundred thousand, it actually might work against you from a comp pick standpoint (and the Donte Moncrief loophole is closed) and there’s no other tackle worth keeping over him.

Analysis: Same deal with the offensive line, keeping all ten of these guys. I’d give Finney the hat over Coward though. Coward may have talent but he’s not NFL-ready.

Analysis: Same group of four here. Loudermilk should be a weekly inactive but he’s shown enough to make the 53. Improving play strength, hand usage, with a strong motor.

Analysis: Isaiah Buggs is #54 on my 53 man roster. I’m tempted to keep seven defensive linemen just because of how talented this group is but that’d be out of step for what the Steelers always do. This continues to be my most difficult prediction of the roster.

Analysis: Sticking with Marsh on the 53 even if it’s been a quiet couple of weeks for him. Special teams value wins out over someone like Quincy Roche. Gotta have some guys you know and trust and have done it inside stadiums heading into Week One.

Analysis: Group feels pretty locked in at this point, especially assuming Marcus Allen serves as the upback, the QB of the punt team.

Analysis: Welcome back Justin Layne. His play ranges from inconsistent to super inconsistent but Mike Tomlin has praised him throughout camp and he’s improved as the summer’s gone along. Provides another outside corner, some special teams value, and none of the UDFAs have stepped up enough to replace him.

Are Maulet and Brooks’ spots safe? I think it’s at least a question. Brooks especially hasn’t done much due to injury. He’s a second-year, former 6th round pick, with about 30 career snaps under his belt. Nothing is tethering him to the roster.

Analysis: Team certainly could and probably should add a FS to the roster. Norwood made strides versus Detroit and is worth holding onto.

Analysis: Sam Sloman didn’t need to be cut in order for Boswell to write his name in pen.

Analysis: This continues to be a close battle. For once, it’d be nice to see this team punt in-games. Until Harvin does something massively wrong, I’m going to give him the edge of Jordan Berry. But Berry has had an impressive camp.

Analysis: A little weird Canaday worked in the second half of the Lions game behind Christian Kuntz. But that felt like a unit thing more than a pecking order deal. Still have Canaday on my 53.

Analysis: Not many changes here to the practice squad. Rader replaces Gentry who lands on the 53. Perhaps the team doesn’t keep three CBs or a guy like Bundage and fills that space with a third wide receiver. Lot to be decided in the finale Friday versus Carolina.