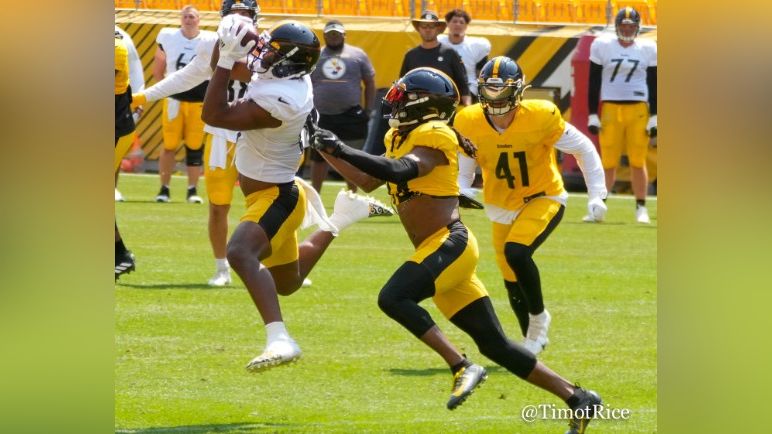 One subject that has been a constant topic of conversation for Pittsburgh Steelers wide receiver JuJu Smith-Schuster throughout the offseason has been his desire to spend more time playing on the outside this year, after essentially being pigeonholed in the slot in recent years.

Appearing from training camp on NFL Network earlier today, he did talk about his role being more outside this year, but explained that it is a function of the Steelers’ new offensive concepts being installed by first-year offensive coordinator Matt Canada.

Canada spoke to reporters yesterday, and he had something of a different answer on the subject of Smith-Schuster seeing more time on the outside. Or rather, to be more accurate, he gave a general answer, but it actually fits with what the receiver said about it being a product of the offense.

“I think there is an active effort to use all of our players and make sure we are utilizing their talents to the best of their abilities”, he said. “JuJu is certainly talented, the way he plays and how hard he plays. I am a huge fan of JuJu, and we are very fortunate to have him back and we are going to utilize everything we can out of it”.

Basically, he didn’t want to say specifically that they are going to play Smith-Schuster on the outside more, but the core idea to take away is that their movement is going to put players all over the field, whether pre-determined in the huddle or as a consequence of reading the defense before the snap, so everybody is going to get opportunities everywhere.

While he has spent the majority of his career in the slot, Smith-Schuster has had stretches in the past, often due to injury, when he had the opportunity to play on the outside more, and he was able to perform in those situations. The past two years, due to a variety of reasons, have left something wanting in his contributions, though, and he seems to believe that playing more on the outside will help both his actual and perceived performance.

He talked about wanting “to elevate my game, being able to play inside, outside, all over the field, you’re not just expecting me to be inside and taking control of the middle, but also be on the outside, too”. Canada’s offense will help put him in situations to take advantage of that.