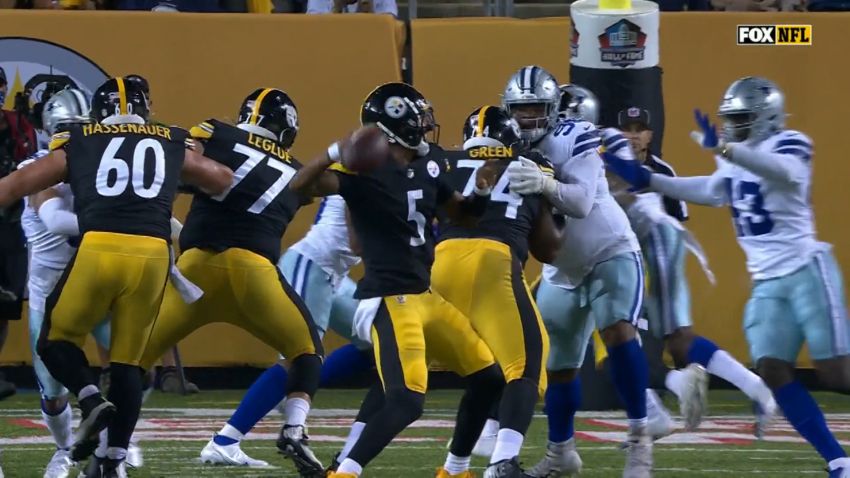 It is common for there to be collateral damage in battle. Even when that ‘battle’ is metaphorical, like a roster battle to decide which players make the team as a certain position. The Pittsburgh Steelers basically always carry three quarterbacks, with very few exceptions, but they have four rosterable players at the position currently on their 90-man roster.

As was the case back in 2018, the assumption from the very beginning has been that Joshua Dobbs, the fifth-year veteran, will be odd man out. But head coach Mike Tomlin after Thursday night’s game, and Dobbs’ play during it, served as a reminder that that’s not the case, as the only quarterback on the night who was able to consistently move the ball.

“I heard the comments”, Dobbs told Missi Matthews following Saturday’s practice, referring to Tomlin’s post-game remarks about not counting him out. “I just compete, at the end of the day, when I step on the field. I can’t always control how many opportunities I’m going to get”.

We caught up with @josh_dobbs1 following the #Steelers first practice after the HOF game to talk QB competition and the O-Line. #SteelersCamp pic.twitter.com/wGjJizB7bk

“I can only control what I do what those opportunities”, he added, “so going out in the game, competing, executing at a high level, is exactly what I’ve been doing throughout practices all camp, and the goal is to continue doing that moving forward”.

A fourth-round pick out of Tennessee in 2017, Dobbs has been traded once and released once, but has never missed a game in his four-year career. He served as the third quarterback behind Landry Jones during his rookie season, before being thrust into a perilous scenario in year two.

That year, the Steelers decided to draft Mason Rudolph in the third round, a player they claim to have viewed as among the top quarterback prospects in a class that yielded three in the first round. He was guaranteed a roster spot, so he would have to unseat Jones as the backup in order to stick. He did that.

A year later, he would lose out to Rudolph as the backup, but still made the roster, before an injury in Week 1 prompted the Jacksonville Jaguars to offer a fifth-round pick for him. The Steelers pulled the trigger because they happened to like what they saw from Devlin Hodges that summer.

Jacksonville cut him loose last year, though, and when he was made available, Pittsburgh let Hodges go (re-signing him to the practice squad) to bring Dobbs back, where he served as the number three last year behind Rudolph.

Now he’s battling not only Rudolph but Dwayne Haskins, who has performed well in training camp, as a former first-round pick. But as he says, he can’t control his opportunities, let alone whom the Steelers bring in. He can only control what he does with the opportunities he has.

“I’m very confident in my skills and abilities”, he said. “I know the type of player I can be, and I love the opportunity to compete. It’s just great to be back in this environment, and I’ll be excited to attack the field next Thursday as well”.

He has performed well in preseasons past, though often getting late-game opportunities against third- and fourth-stringers. That will likely remain the same this year. It’s still hard to see a clear path back to the roster for him, but should he go unclaimed on waivers in the event that he doesn’t make the team, there’s a good bet he would be brought back on the practice squad.