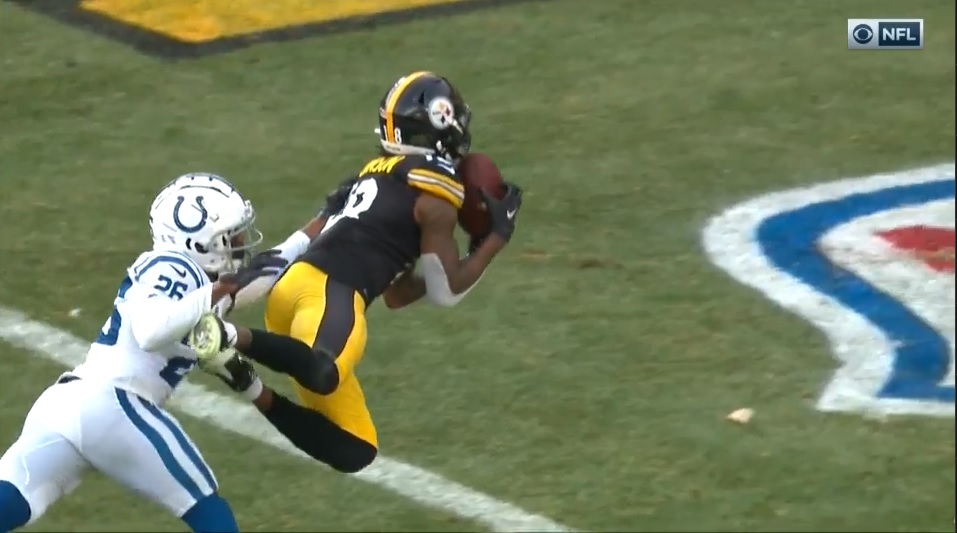 In addition to Pittsburgh Steelers quarterback Ben Roethlisberger once again being criticized frequently this offseason about his overall physical conditioning, there’s also been a lot of talk the last several months about his ability to still throw the deep ball. A lot of that criticism about Roethlisberger’s deep ball this offseason seems to stem from his low completion percentage last season on throws 20 yards or more down the field and combined with his ultra-low average air yards per completion stat. On Monday at the Steelers training camp practice at Heinz Field, not only did wide receiver Chase Claypool defend Roethlisberger’s deep ball ability and arm strength as he heads into his 18th NFL season, but fellow wide receiver Diontae Johnson did as well during his media session.

“People who saying that are crazy,” Johnson said when asked about Roethlisberger being accused heavily this offseason about no longer being to throw the deep ball. “Because at the end of the day, they are not out here with Big Ben, so they can’t really say or whatnot. But me, personally, and me being able to play with him, I’m out there with him so I know how he’s throwing the ball or whatnot.”

So, does Johnson see more accuracy on deep passes from Roethlisberger so far this offseason?

“I mean, to me, before I even got in the league, it’s always been that way from me just watching him and whatnot,” Johnson said.

What about as opposed to last season, Roethlisberger’s first season coming off the serious elbow injury in 2019?

“I mean, yeah, it’s still the same to me,” Johnson said on Monday. “Ben is going to throw the ball how he throws it. Nothing’s changed. I mean, he’s going to be doing what he’s been doing before. Like I said, nothing’s changed. His arm’s still great. So, nothing to complain about.”

Roethlisberger has already commented a time or two so far this offseason about how much fresher his arm feels at this point of the offseason compared to a year ago and that’s mainly because he was forced to throw quite a bit more last year during the spring and summer as part of his injury rehab. Based on firsthand reports out of training camp so far, Roethlisberger’s deep passes have been fine, for whatever that is worth.

Last season, Roethlisberger attempted the fourth most passes in the NFL of 20 yards or longer. The problem, however, was that he only completed 30.3 percent of them, That said, Roethlisberger’s completion percentage in 2017 on his 88 total deep pass attempts that flew 20 yards or longer was 27.3 percent, according to Pro Football Focus. In 2018, however, Roethlisberger completed 34.5 percent of his 20 yard or longer deep pass attempts and the hope is he can get back to that rate or better in 2021 with a fresher arm.

We’ll obviously be tracking Roethlisberger’s deep passing stats closely throughout the 2021 season and the hope is that he doesn’t have to wind up being near the top of the league in such attempts. If he attempts fewer deep passes and completes them at a rate of 35 percent or better, that should wind up benefitting the offense quite a bit. In the meantime, however, Johnson, like Claypool, doesn’t sound too concerned about Roethlisberger’s ability to still throw the deep ball and connect on it despite the quarterback now being 39 years old.

“He’s still has it even though he’s up there in his age,” Johnson said on Monday of Roethlisberger. “I’m not calling him old, or whatnot, but he’s still got it or whatnot. So, he’s showing it at practice completing passes, deep balls, whether that’s short or intermediate throws or whatnot, he still has it.”