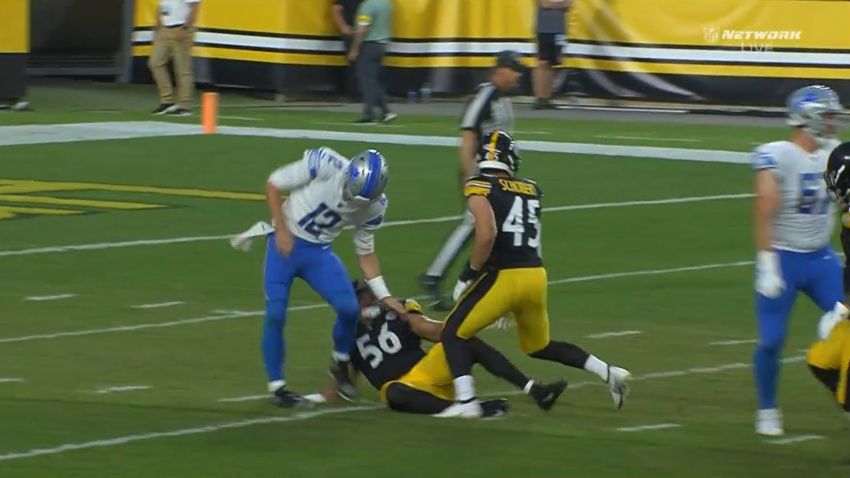 Joe Schobert has officially been a member of the Pittsburgh Steelers for less than a week. That did not prevent the sixth-year veteran inside linebacker from serving as the team’s defensive communicator during his first on-field action in last night’s preseason game against the Detroit Lions.

A four-year starter and former Pro Bowler, Schobert has spent most of his career being an every-down linebacker and the ‘quarterback’ of the defense, the player who has the speaker in his helmet, through which the coaching staff relays the plays. The helmet with the speaker has a green dot sticker on the back, and it’s been quite a topic of conversation the past week.

He assessed his performance during his first hitting of the year. While he was satisfied overall with how things played out, he also acknowledged that there are some things that are a work in progress. “This was my first live action of any kind in training camp”, he said.

“We didn’t tackle in practice in Jacksonville, and I got traded before the first game, so jumping into the fire out there was good, though I think [I have] a little concern just in my job and my responsibility, so I didn’t play as fast as I could, but I think overall it was a good night”.

Having less than a week of practice with a new team, and with that team’s playbook, it’s reasonable that it would be a process for Schobert to get fully comfortable with setting the defense for the Steelers, even if he has experience learning new defenses, even on new teams, and setting them.

The compressed timescale will complicate his ability to hold that role for the season opener, though it is looking likely. Pittsburgh can also have Devin Bush do it after he carried out that assignment last year, and they are going through the process of figuring out which arrangement works best for where the two of them are right now.

While Schobert is new to the defense, he is very experienced in the role. Bush is in his third season with the Steelers, but only have five games of experience serving as the defense setter at this level, and he’s still working his way back to 100 percent after tearing his ACL last year.

But that they have options is a good thing, and there is still some time left before the regular season begins, albeit not much in-stadium work between now and then. It’s a good problem to have when you are trying to decide which of two capable players to carry out an important role.