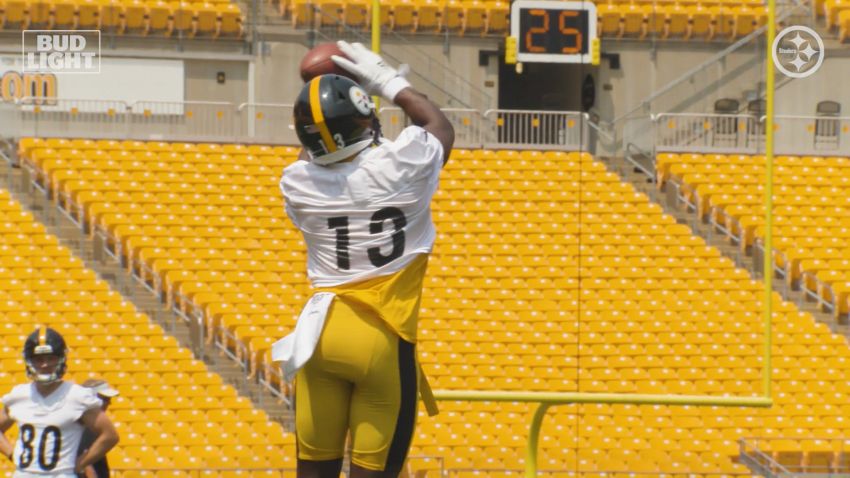 James Washington wants to get on the field. He doesn’t have to tell anybody in order to know this. You don’t make it to this level without having a desire to be on the field and to have the belief in yourself that you can make a difference for your team if you’re in the game.

The players don’t decide who’s on the field, however, except by their actions, and they don’t get to make up their coaches’ minds for them. For the Pittsburgh Steelers wide receiver, this meant his snaps were cut last season in order to make way for the young new rising star of Chase Claypool.

Now in a contract year and understanding that he is clearly on the outside of the top three at the position, Washington is hoping that Matt Canada’s offense will help not just him, but everybody else in the room find more ways to contribute by asking them to know every role and to move around.

“I just feel like it’s making me a little bit more well-rounded”, he told reporters yesterday. “That way I can’t just be labeled as an outside receiver, because that may limit you to plays here, there, whatever that may be. If anybody goes down, I feel like I can just get in there and pick up the slack. I think it just helps me all around”.

Washington spent about 20 percent of his playing time lined up inside, mostly in the slot, but also with some in-line snaps. JuJu Smith-Schuster has been the Steelers’ slot receiver for the past four years, but has been lobbying to spend more time playing on the outside.

It will be up to the team’s new offensive coordinator to figure out how to move everybody around on the field, find their strengths and weaknesses, whether or not they offer a good matchup against a particular opponent, and when to rotate guys in and out.

The former second-round pick was limited to just 30 receptions last season in under 500 snaps, going for 392 yards, but with a career-high five touchdowns. He still found ways to contribute even as his opportunities declined. He had a big 50-yard catch-and-run touchdown, for example, against Washington in a game in which he only logged 38 snaps.

The Steelers have often talked about having their wide receivers know every position and the value of moving them around, but they really didn’t take advantage of this under Randy Fichtner. They did it a bit more during Todd Haley’s tenure, but Canada has the potential to take that to a whole other level.