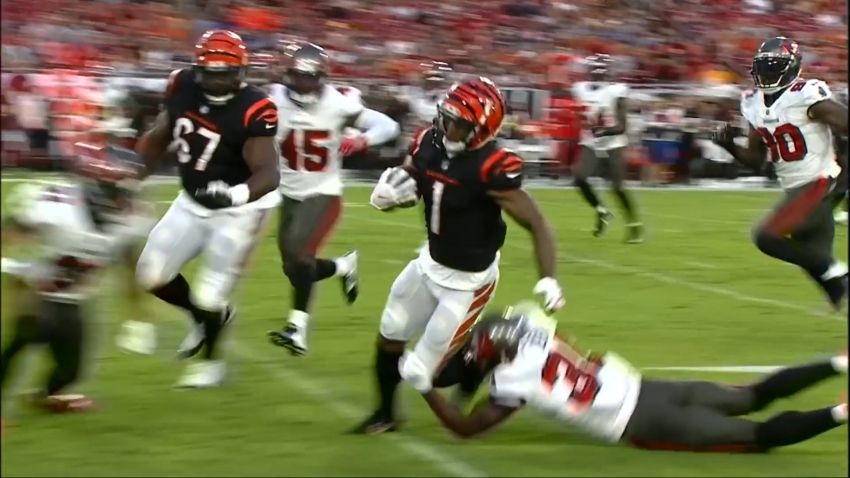 We used to hear from the Pittsburgh Steelers of the 1990s, for example, that they practiced so hard, so fast, that the games almost felt slow in comparison. And it does make sense. The closer you can replicate actual game conditions, and game-level effort, the easier it will be to translate what you do on the practice field into a stadium.

That is how Cincinnati Bengals rookie wide receiver Ja’Marr Chase felt about his first game since 2019, after sitting out the 2020 season. “Practice was much faster than the game we played today”, he said following the team’s recent preseason debut, during which he caught one pass for 16 yards.

He only caught one pass during the game, on their opening drive, a screen from their opponent’s 39-yard line with open space. He picked up 16 yards, but in hindsight, he feels like he should have accelerated, and could have scored.

“Could’ve capitalized a little more on it”, he told reporters after the game about his first career catch. “Hit it a little faster and maybe it could’ve been something better, could have got more yards or something like that but I take what the defense gives me”.

For those who may somehow not know by now, Chase was the fifth overall pick in the 2021 NFL Draft and a former LSU standout who had an incredible college season in 2019 during his one year of extensive playing time, and he had the Bengals’ quarterback, Joe Burrow, throwing him the ball. That’s why they felt he was worth that price, even after sitting out a year, and passing up potentially a generational left tackle prospect.

The starters only played one drive during the first preseason game except for Tee Higgins, whom they apparently played for one snap on the second possession just to make sure that they get him a touch. Chase said he would’ve liked to have played more as well.

“Just because it was my first game back, I was so anxious to play and so excited to be in another game”, he told reporters in his post-game remarks. “I was trying to go in an extra series but I was sure that wasn’t going to happen”.

He’ll have plenty of games to play in the future, of course, and potentially a very long time with Burrow, whom Cincinnati drafted first overall the year before they added Chase.