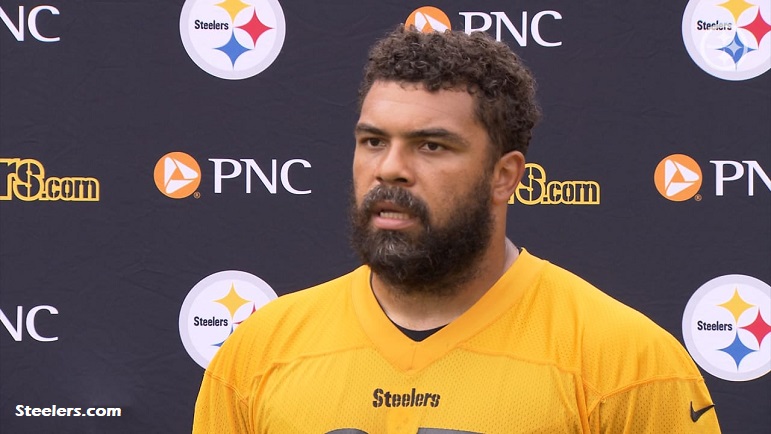 The Pittsburgh Steelers have added two important veteran pieces to their defense this summer in the form of inside linebacker Joe Schobert and outside linebacker Melvin Ingram, and both will now be expected to play huge roles on that side of the football in 2021. On Thursday, Steelers defensive tackle Cameron Heyward was asked questions about his two new defensive teammates at the conclusion of the team’s final training camp practice at Heinz Field.

First, Heyward was asked Thursday about his newest teammate, Schobert, who is now expected to wear the green dot at the start of the regular season and thus be the new quarterback of the defense. Specifically, Heyward was asked how the transitioning process for Schobert seems to be going so far and especially when it comes to the communication aspect.

“Good,” Heyward said. “You know, I think it’s a process though. We understand that he’s still taking in information and trying to spill it out to all of us and some of that is just us communicating back. And he’ll get more and more comfortable as we get going. But I think today was a big step because we really had to work on our communication and work on our hand signals because if it gets loud, what’s going to happen out there? And I thought we did a pretty good job.”

Schobert is expected to make his Steelers debut Saturday night in the team’s home preseason game against the Detroit Lions. Whether or not Heyward plays in that game is yet to be seen, however.

As for Ingram, who made his Steelers debut in the team’s second preseason game last Thursday night against the Philadelphia Eagles, Heyward was asked to comment how he seems to be fitting in with the team, especially with it seeming like he has a big personality, according to one media member.

“I don’t know if he’s a big personality, I think he fits right in,” Heyward said of Ingram. “You know, I think he brings a veteran presence that provides depth as well. And he just knows what he’s doing. You know, he’s able to ask questions that aren’t day one questions. He knows what he’s done in the past, but how do you emulate that in our system? And I think, you know, if T.J. [Watt] or [Alex] Highsmith have to take a break, you know, he can step in, stop the run, and play the pass too.

Earlier this summer, the Steelers certainly needed to add a third outside linebacker to go along with T.J. Watt and Alex Highsmith, and Ingram’s addition certainly seems like it will fit that bill and more. Ingram appears to be fully healthy again and ready to play whatever role the Steelers need him to play in 2021. If Ingram stays healthy, his addition should help the Steelers front seven tremendously in 2021 and that includes Heyward as well.

“So, we’re very fortunate to have a guy like that,” Heyward said.