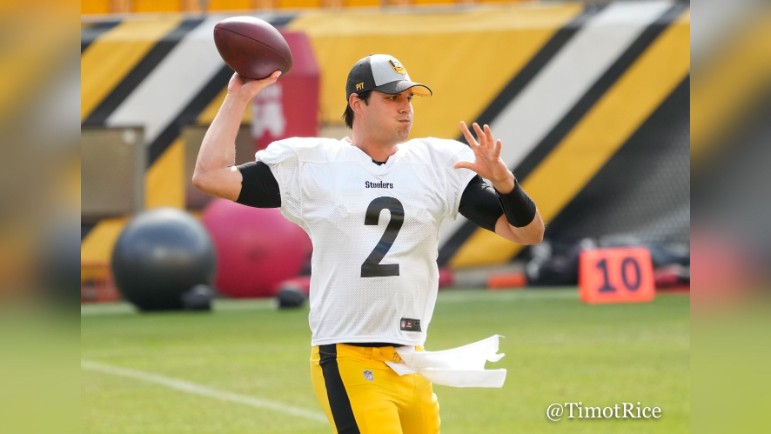 If you take a look at national media postings on the Pittsburgh Steelers, a majority of them will be listing QB as the biggest need for the team heading into 2022. Thus, we have already seen several mock drafts come out over the summer penciling in the Steelers for a QB in the first round of the 2022 NFL Draft. Now I am as much of a draft junkie as anyone out there when it comes to scouting and evaluating talent months ahead of the actual event and have actually conducted a Summer Scouting Series on a majority of the 2022 QB class that is expected to go early once the draft gets underway in April.

However, when analyzing the situation from a team building/roster management perspective, I actually think that Steelers fans should be in the mindset of hoping Pittsburgh does not take a QB with their first selection in 2022.

“But Jonathan, when Ben Roethlisberger retires after the season, the team will have a clear hole at the position and will need the next signal caller to lead the franchise for the next decade!”

I understand this and completely agree with this assessment, but I am in the camp that is hoping that the team has someone on the roster that can man the position, at least in the short-term as a bridge QB, and potentially become even more. As I have said since he was signed, I have been a huge fan of bringing in Dwayne Haskins for a variety of reasons.

First, he is on a futures contract, basically being guaranteed nothing with the team being able to move on instantly should he slip up. Second, he leaves a shaky situation in terms of ownership, roster management, and being close to home with a multitude of influences around him in Washington to go to one of the most stable organizations in the league. Third, Haskins has the pedigree and physical talents that made him a first-round selection by Washington just over two years ago and presents a low risk/potentially high reward signing for the team needing a potential successor to Ben in 2022.

Yes, Haskins has had his warts thus far in his time in the NFL, but a majority of young QBs do. He was forced into action well before he was ready and experienced trial-by-fire, having a depleted skill position group, a patchwork offensive line surrendering nearly the most pressures in the league, and went through multiple changes in the coaching staff all before the kid’s 24th birthday.

Now in Pittsburgh, he has a plethora of offensive weapons at his disposal at all positions, an offensive line that honestly isn’t any worse than it was in Washington given the whole Trent Williams situation, and also has the weight of the world off of his shoulders with Ben as the clear starter in 2021, limiting the expectations on him this season and allowing him to develop as an NFL passer which was something he really didn’t get the chance to do at his previous stop.

Obviously, the attitude and work ethic issues are something that he has direct control over but given how he has performed thus far in training camp, it appears as if Haskins has done his best to get his head on straight for his 2nd and possibly final chance to resurrect his NFL career in Pittsburgh.

Pittsburgh understood that they were going to be in a bind QB-wise heading into 2022 having no signal caller under contract after 2021 once the offseason started, so they made the move to re-sign Mason Rudolph to a one-year contract extension. Many would like to point out that Rudolph will likely never be a high-caliber starter in the league, of which I will agree with you.

However, sometimes it’s better to trust the devil you know rather than the devil that you don’t, and with Rudolph, we know he can come in and keep the offense afloat and help the team win games. Over the past two seasons, Rudolph has amassed a 5-4 record as a starting QB in the NFL, throwing for 2087 yards, 15 TDs, and ten INTs. Statically, this is no worse, if not actually better than the likes of Sam Darnold, Daniel Jones, Drew Lock, and other borderline starters in the league over their first few seasons.

Rudolph doesn’t have that upside to carry a team to a Lombardi Trophy, but he is competent enough to keep a competitive roster in games having been with the team for several years now and has a rapport already established with the rest of the roster and coaching staff. He notched wins against the Rams, Colts, Dolphins, and Bengals in 2019 and narrowly lost to the Browns in Week 17 of 2020 with a plethora of key starters on the shelf, suggesting he can hold his own against other solid teams across the league should the talent be around him.

The case I am trying to make here is that Pittsburgh has two guys currently behind Ben Roethlisberger that present both high floor and high upside at the QB position. Instead of trying to draft and develop a rookie QB drafted in the middle-to-late first round (assuming Pittsburgh is successful in making the playoffs in 2021), they could opt to roll with what they got on the roster into 2022 and instead spend their draft capital on a blue-chip prospect along the offensive line, secondary, or at off-ball linebacker.

This investment, along with using their projected cap space in 2022 to retain their key free agents and hopefully bring in a few others from the outside the organization, will allow Pittsburgh to reload their roster with talent on both the offensive and defensive side of the ball, given both Rudolph and Haskins the support to truly succeed if given the opportunity to start in 2022.

Should both guys “fall flat on their face”, then the team could use 2022 as a “gap year” of sorts, having the roster ready for a young drafted signal caller to be dropped in on a rookie deal to compete for the next 4-5 years while tied to a cheap deal for the QB position. Tomlin and Colbert haven’t been in the business of tanking and want to compete for the playoffs every year, but using a combination of Haskins, Rudolph, and possibly an option from the outside instead of investing in a 2nd tier rookie QB may be the best way to compete in 2022 from their perspective.

While prospects like Carson Strong, Sam Howell, and Matt Corral to name a few are very intriguing, all do need notable development before being relying on as reliable NFL passers. Haskins is in the same boat with arguably similar arm talent but is currently on the roster on the cheap and has NFL experience. Rudolph may not have the upside of these prospects, but he is a proven commodity that has shown he can win games in this league.

While I understand that the likelihood of either Haskins or Rudolph being the next franchise QB of Pittsburgh for the foreseeable future may be unlikely, I want to see them given the opportunity with more talent put around them to give them every chance to succeed. Should neither pan out, that is when you can push your chips to the middle of the table and trade up for say Clemson QB D.J. Uiagalelei in 2023 or another high-caliber QB prospect to be the face of the franchise going forward.

What are your thoughts on the QB situation behind Ben Roethlisberger in 2021 and beyond? Do you think that Pittsburgh has to target a QB in the first round of the 2021 NFL Draft, or can give Rudolph and Haskins the opportunity to compete for the job and showcase what they can do in 2022 while allocating resources to other key positions of need to build up the rest of the roster? Please leave your thoughts in the comments section below and thanks again for reading!