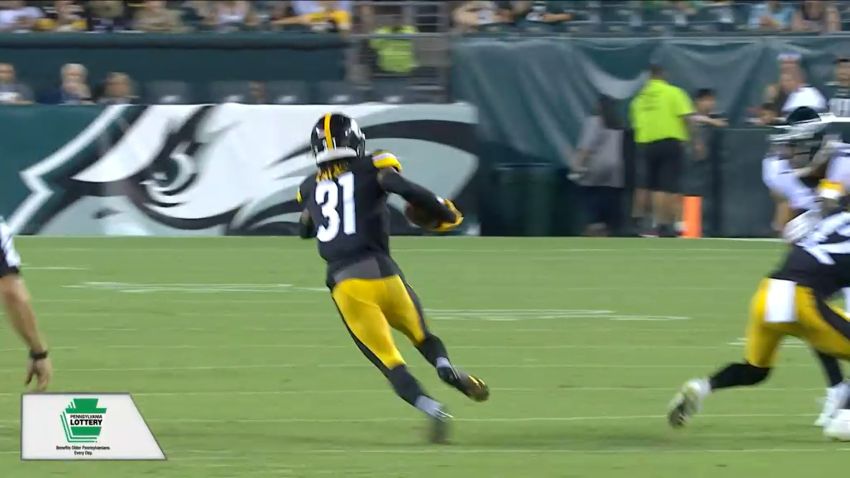 Going into training camp, the notion around Pittsburgh was that CB Justin Layne could be on thin ice. The third-year pro and former third-round selection out of Michigan State had yet to perform to the billing of his draft status in his first two seasons and didn’t exactly inspire confidence with the limited play time he had received up until now.

Add in an offseason arrest for a gun charge after a traffic stop where he eventually plead guilty to a misdemeanor, and you have a young man showing himself the door on the way out rather than fighting for a significant role on defense. Contributors here at Steelers Depot figured as much, as many of our writers stated that they thought CB James Pierre jumped Layne on the depth chart at the end of last season, and so far has gotten more run with the first-team defense in nickel packages.

Reports initially out of training camp practices came out that Layne was struggling in coverage, having a tough time containing the likes of Chase Claypool in contested catch situations as well as staying sticky in coverage against the better route runners he would face. This made Layne an easy candidate to project to not make the 53-man roster at the end of the preseason, but once preseason games got underway, Layne has stepped up his play when it has mattered most. He recorded a clutch forced fumble in the Hall of Fame Game against the Dallas Cowboys and snagged his first interception in the second preseason game against the Eagles. Sure, there were negatives mixed in with the positives, but we actually got to see Layne making splash plays, something I personally criticized him for lacking all the way back to his days playing for the Spartans.

Going into the teams’ third preseason game against the Detroit Lions, you knew Layne was going to get ample playing time to show his first two games weren’t a fluke. He ended up playing 41 snaps which lead the team and allowed three catches on four targets for a whopping total of 12 yards while also recording a PBU, two tackles, and two missed tackles.

Let’s dive into the tape. As we well know, any backup defender likely has to make their way on special teams in order to have a role on game day outside of just being purely depth. Layne has logged special teams snaps the past two seasons, and figures to play more of a role there this season if kept on the roster. His athletic profile makes him a good option on kick and punt coverage units, and we see evidence of that on this kickoff coverage play where Layne tracks the ball down the field, works through the blocker, and makes the tackle on the kick returner after breaking down for a good form tackle.

While I have often criticized Layne for his lack of physicality in the past, he has shown improvement from previous seasons. Take, for example, this dump off to the running back on third-and-long where Layne engages the WR attempting to block him, works off of the block, and gets in on the tackle along the sideline. Not an impressive play, but still shows Layne’s improved willingness to get in on the action downhill.

Here’s another example of Layne coming down on run support, recognizing the runner is coming back to him and takes away the cut back angle on the right side, combining with #41 Robert Spillane along with several others who come in late to throw the runner backwards after bottling him up at the LOS.

You know what they say thought? Baby steps. While Layne has shown improvement as a tackler, he still has a ways to go to be considered “reliable” in this area of his game. He often likes to come in and lead with the shoulder or leave his legs rather than wrap up and drive through a ball carrier on contact. We see that here on this check down pass to the tight end in the flat where Layne does a good job to come downhill to make the play, but he ducks his head and pauses his feet on contact, becoming the nail rather than the hammer as he falls down and the receiver attempts to gain more yards after contact.

Here’s another bad tackle attempt by Layne later in the game on a swing pass to the running back out of the backfield, doing a good job to recognize the play and close downhill in a hurry, but leaves his feet and tries to arm tackle the back by the waist, sliding off to the ground as the back spins out of it and turns upfield to pick up additional yardage.

While the tackling was up-and-down, I do want to recognize the improvement in pass coverage Layne has had. While fellow Steelers Depot contributor Daniel Kitchen noted in his recent article on Layne that he currently leads the team for the highest percentage of pass completions allowed in coverage when targeted more than five times, it should be noted that a lot of these completions have come on short passes near the LOS. Also, Layne has been targeted the same amount of times as Pierre, who himself has struggled with underneath route patterns and limiting inside separation in coverage thus far this preseason.

While I recognize Layne has been giving up receptions, I also want to call praise to him being in better position in pass coverage far more often than he was last season. He seems to be thinking less out there and reacting more to what is in front of him. One play that stood out to me was this rep with Layne at the LCB of the defensive formation where he lines up in press man coverage. On the snap, Layne hits the receiver with a good jam with his left arm to delay his release off the LOS, giving Layne enough time to flip his hips and run with him up the sideline, staying with the receiver step-for-step. The pass went away from Layne to the middle of the field, but I love the use of hands and length here on this play for a corner that has the measurables to make an impact in press man coverage.

Alex Kozora and Dave Bryan did a great jump highlighting this next play on the Twitter machine. Here we see Layne’s improvement in communication and diagnosing the play as the defense makes a “zombie” call against a Yankee look by the offense. Layne signals to the safety to take the over route by the receiver coming from the right side of the formation as Layne goes to aid the opposite corner in the middle of the field covering the deep post. Layne does a great jump getting into position in front of the receiver to play the ball in the air and force the incompletion, tipping the ball away as James Pierre had lost a step on intended receiver #18 Geronimo Allison.

Here is the same play included from the television view.

With the recent release of projected nickel defender Antione Brooks Jr. and with Arthur Maulet nursing his own injury, the Steelers CB room is pretty bare in terms of quality options both at nickel and for quality depth on the boundary. The team has played Cam Sutton more in the slot the last few days and against the Eagles and S Tre Norwood is expected to get some work there in the preseason finale against the Panthers. Should Sutton play a significant role at the nickel this season, Layne could easily be the “next man up” on the perimeter to either Joe Haden or James Pierre.

While Layne still has his concerns and isn’t a finished product, I do recognize the strides he has taken this preseason to not only make the roster but play potentially a significant role in 2021. Sure, Pierre figures to run ahead of Layne at this point, but he too has had his issues so far in preseason action. Given the lack of quality options in the room along with improved play, I have to think Layne has done enough to make the 53-man roster in 2021. His physicality and consistency still need to improve, but he is in better position in coverage this year and has shown he can make splash plays.

He has garnered praise from both HC Mike Tomlin and defensive assistant Teryl Austin for his play, recognizing that he may have done enough to cement his spot on the roster.

What are your thoughts on CB Justin Layne this preseason? Do you think he has done enough to earn a roster spot? Can he continue to take a step forward in his development, or would you want to see the team look to the outside for other options? Please leave your thoughts in the comments section below and thanks again for reading!