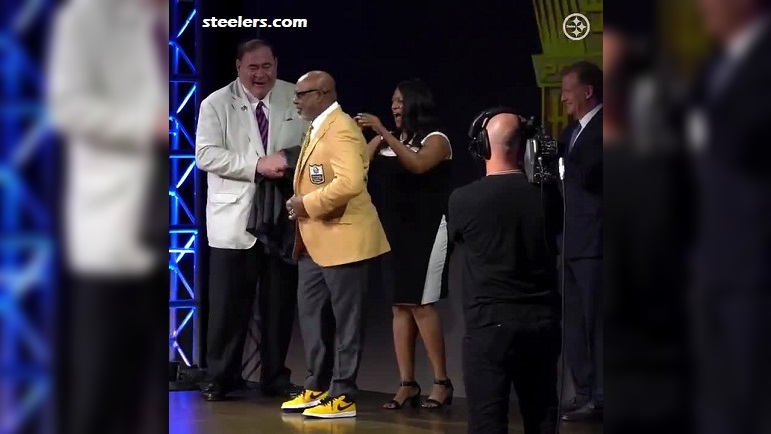 Longtime NFL safety Donnie Shell will be officially enshrined into the Pro Football Hall of Fame on Saturday. The former Pittsburgh Steelers safety should have quite the induction speech later tonight as well and during it I expect he’ll talk about another former defensive teammate that deserves to be in the Hall of Fame with him, L.C. Greenwood. Friday night at the famed Gold Jacket ceremony in Canton, Shell received his and did so while wearing a pair of gold Jordan shoes that included a special shoutout and acknowledgement to Greenwood.

Shell’s gold pair Nike Jordan shoes included L.C.s initials on one of them and his number, 68, on the other. The gold shoes are also a standalone tribute to Greenwood as the former member of the famed Steel Curtain wore gold high top shoes starting in 1973 after being diagnosed by the Steelers team doctor as having a severe ankle injury.

As the story goes, the doctor suggested that if Greenwood wanted to play in the team’s game one particular week during the 1973 season, that he would have to wear high top shoes. One of the Steelers trainers at the time had a friend who owned a shoe store in the Pittsburgh Strip District. A few pairs of black Riddell high tops were acquired but because they looked ugly, they were painted gold to the approval of Greenwood. Those gold shoes became a favorite of fans of the Steelers and a good luck charm for Greenwood as well. The rest is history.

The big push by Shell to Greenwood into the Pro Football Hall of Fame is understandable. After all, Greenwood was a six-time Pro Bowler during his NFL career and was named first-team All-Pro twice in his 13 years with the Steelers. He’s also a member of the NFL’s 1970s All-Decade Team and Steelers All-Time Team. In addition, Greenwood is one of 22 players who won four Super Bowls with the Steelers in the 1970s.

Along with the 78-career regular season sacks that Greenwood is now unofficially credited with registering, he also recorded another 12.5 sacks in the playoffs, which is the most in franchise history. His biggest sack performance came in Super Bowl X against the Dallas Cowboys when he had four takedowns of quarterback Roger Staubach.

Greenwood was a Pro Football Hall of Fame finalist in the 2005 but did not get elected that year. He was once again a finalist in 2006 but once again came up short. Before he passed away in 2013, Greenwood had stated that while he would indeed be honored if he were ultimately inducted into the Hall of Fame, he would not be upset if he were not ever elected as he felt that the Steelers already enshrined in Canton, in particular, Joe Greene, represent the entire team’s accomplishments from his era.

Just last month during his pre-enshrinement media session, Shell talked some about his push to Greenwood into the Pro Football Hall of Fame

“It would be a tremendous award for him and his family, and also for me,” Shell said during his Pro Football Hall of Fame press conference via Brian Batko of the Pittsburgh Post-Gazette. “L.C. was very unusual. He was about 6-8, about 260, but we played a 4-3 defense, and he was just as good a run-defender as a pass rusher. A lot of people don’t realize that. I played on his side, the strong safety, and Jack Ham was the outside linebacker and L.C. was the defensive end. He played the run just as well as he was tremendous as a pass rusher.”

Will Greenwood ever get into the Pro Football Hall of Fame as possible Veteran Committee selection? Personally, I like the chances of that happening and maybe within the next five years or so. We’ll see and hopefully Shell will be able to witness such a thing happen as well.

Donnie Shell with the great push for L.C. Greenwood to get into the @ProFootballHOF next. #Steelers from @donnie_shell on IG https://t.co/yihxnlOb0U pic.twitter.com/HaFSzzusvf