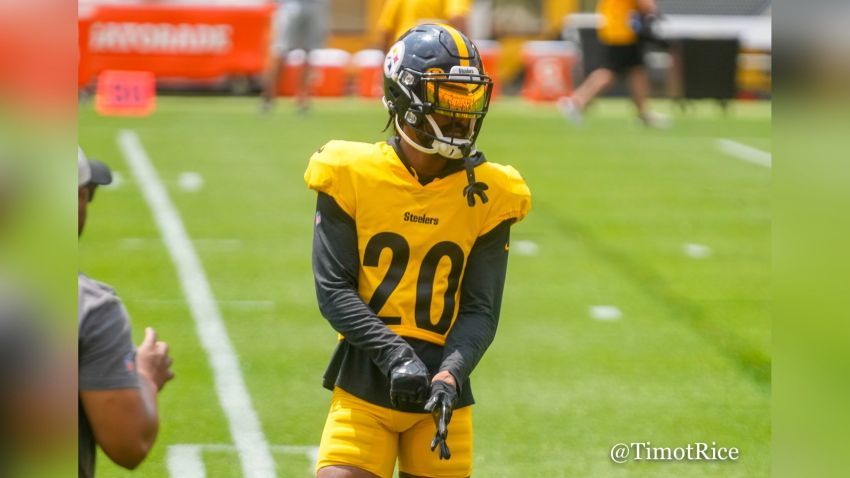 Cam Sutton still doesn’t know where he’ll line up when Pittsburgh travels to Buffalo Week 1. But he’s ready to attack whatever role he’s given. The most versatile player in the Steelers’ secondary, Sutton credits a firm understanding of the defense that allows him to line up all over the field.

Meeting with reporters after practice, Sutton spoke to his versatility

“It’s not difficult at all,” Sutton said via Steelers.com when asked how hard it was to move around. “I have a great understanding of our defense. That’s where it starts. You gotta have the fundamental base of obviously your job but the guys around you. From there, matching up your leverage, alignment, assignment, your keys, what you’re looking at out there on the field. And then just playing football from there.”

Sutton’s football IQ is what attracted the team to him in the first place. As Mike Tomlin and Kevin Colbert have told the story many times, they met with Sutton and started going through tape. Sutton not only knew his job but the role of everyone around him. Skeptical, Colbert pulled a random game up, thinking Sutton had study and memorized just one game to try and impress, but Sutton did the same thing for the next game they watched.

He became the Steelers’ third-round pick in 2017 and worked his way up the defensive ladder ever since. His game has grown over time, especially as a tackler, and he became the first Steelers’ DB to record a forced fumble in three straight games since Troy Polamalu.

Sutton’s hoping to make some plays with the ball in the air this year, too.

“You see ball, get ball. You start getting a feel for concepts. How offenses are trying to attack you per the coverage or per the call. And you just go make plays on the ball.”

With just three INTs in four seasons, making plays will be in Sutton’s job description as he takes over starting cornerback duties from Steven Nelson, released this offseason. Sutton’s playing time has increased year-by-year but even in 2020, he barely played more than half the snaps. In 2021, he’ll be a near 100% snap player. How much of that work is inside or outside remains to be seen.