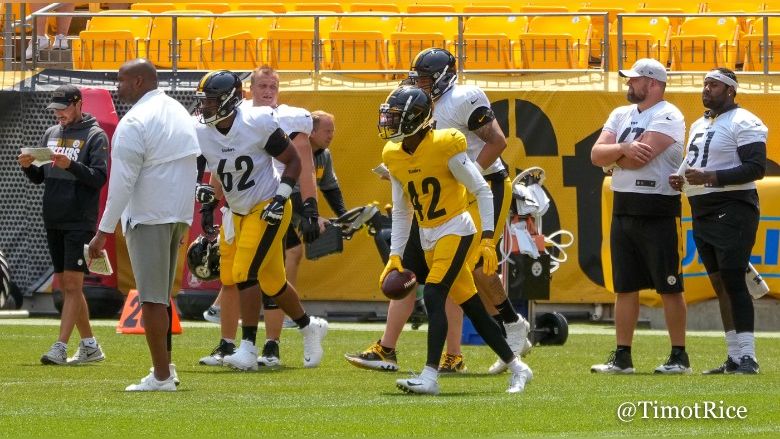 The Pittsburgh Steelers are in an exploratory phase in their secondary, after losing two starters in the offseason in Steven Nelson and Mike Hilton. They were fortunate to have already built depth, allowing Cameron Sutton to step into the void in one spot, but there are other roles up for grabs.

James Pierre doesn’t appear to be the favorite to land the nickel role, but that may only be because they don’t have him playing in the slot, where the coaches seem intent on finding a new starter with the requisite skill set. If it were based purely on performance, the second-year cornerback may be a lock.

Safety Minkah Fitzpatrick was asked about Pierre following practice today, and he made it clear that what we’re seeing in training camp—outsiders’ most extensive look at him since he came into the league—is nothing new. “He’s a guy that’s been doing really well since OTAs”, he said.

“He came in this year, he knows the playbook very well”, Fitzpatrick added. “You never really see him out of place or missing an assignment. He’s a big guy, but he’s fast, and he uses his skill set. He’s physical at the line of scrimmage, and he could run with people. You see that happening with every single snap that he’s out there. He has four or five picks this camp already because he’s jamming receivers, throwing off their timing, and getting the ball. He’s a guy that’s been showing up for sure”.

Undrafted out of Florida Atlantic in 2020, Pierre was the most unlikely inclusion on the 53-man roster last year. Coming from where he was, entering a pandemic-stunted offseason that featured no preseason games in which to impress coaches, he made the team as a sixth cornerback, playing a role immediately on special teams.

The Steelers seem to be very high on him, but the simple reality is that he has incredibly little work against opponents since entering the NFL, roughly a couple dozen late-seasons snaps under his belt. What they’ve seen him do has come against their own offense.

But that will change starting Thursday night when the Steelers and the Dallas Cowboys take the field for the Hall of Fame game. Assuming he continues to play as well as he has during training camp, a defensive role is inevitable, at least as the dime back.

After that, who knows? This is somewhat far into the future, but he could conceivably be viewed, in time, as the heir apparent to Joe Haden, will be 33 next year. One thing we know is that he would certainly be cheaper.