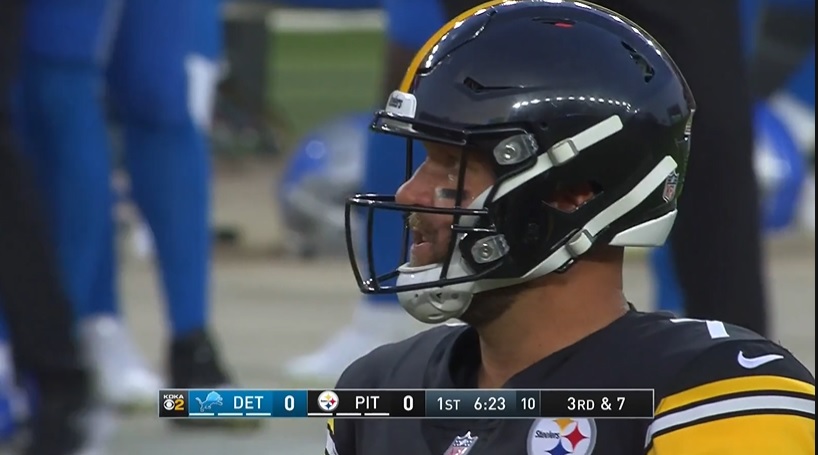 Prior to the Pittsburgh Steelers’ preseason game against the Detroit Lions, HC Mike Tomlin would use the game to get QB Ben Roethlisberger an opportunity to play in the stadium with the new offensive line and skill position players at his disposal. Tomlin also stressed that it would be important for Roethlisberger to get exposure to new OC Matt Canada’s offensive system in preseason action before the team kicks off the regular season on the road in Buffalo Week 1 and was open to Roethlisberger playing a number of snaps to help him get the reps he had been lobbying for in practice in lead up to the game Saturday night.

Ben only played 16 offensive snaps on the night, but he sure made them count, completing 8-of-10 passes for 137 yards and two touchdowns after playing a majority of the first quarter. The way Ben played and racked up those nice stats in one quarter of action was mainly what stood out to me after going back to watch the tape. The narrative this offseason heading into 2021 was that Ben Roethlisberger was washed up and would hinder the Pittsburgh Steelers’ chances of making a playoff run because he doesn’t have the arm strength to make plays down the field.

At the beginning of the game, I was admittedly in the same camp, seeing short dink-and-dunk completions like this one to #13 James Washington, thinking that this may be the exact same Ben we saw in 2020.

However, the very next play, we got to see Ben air it out down the field to #18 Diontae Johnson nearly 50 yards down the field. After taking the snap from the shotgun on 3rd-and-3, drops back to pass and steps up to throw down the seam to Johnson who gets nearly five yards of separation on the defender in coverage. Ben puts a lot of air on his throw, causing Johnson to have to slow down and come to a stop to haul in the reception before the safety comes in to try and knock the ball out of his hands.

Ideally, Ben would have used less arc on this throw and delivered more of a bullet pass to hit Johnson in-stride, but the narrative that Ben can’t throw the deep ball anymore can be put to rest.

Not only did Ben Roethlisberger hit on a pass over 20 yards past the LOS within the first six minutes of the game, but he also took Steelers Nation back in time to his gunslinger days when he was known for scrambling around out of the pocket to keep the play alive and make something happen down field.

On this third down pass attempt, Ben senses the pressure coming at him and rolls out of the pocket to his right, after ducking under the first defender who pressures him and gives a nasty pump fake to evade the second defender coming after him, locating #85 Eric Ebron on the right sideline and throws the ball on-the-run, placing it directly into Ebron’s chest.

Sadly, the long history of Eric Ebron and his drop issues comes out on this play as well, dropping what would have been a big-time play. Ben may not be a young, spry chicken he used to be, but seeing him maneuver outside of the pocket and extend the play is a good sign that the knee injuries he was dealing with last season could be well behind him.

Speaking of pump fakes, Ben’s first touchdown pass to #88 Pat Freiermuth not only faked out the defense, but also the camera crew working the game Saturday night. After taking the snap, he saw that Freiermuth was coming to the top of his route, but wasn’t yet coming out of his break, so he hits his patented pump fake, then letting it high into the end zone up high where his big bodied TE leaps up to snag it out of the air and come down with the score.

When you actually go back and look at the play, it’s flat-out impressive how Ben holds onto this football, going through his full throwing motion, but manages to stick the ball to his arm pit, reset, and release a beautifully thrown ball only his man could get. Not bad for a man now two years removed from major elbow surgery.

Now outside of the bad drop by Ebron, Ben’s only other incompletion came on this first down pass attempt to #22 Najee Harris leaking out into the flat. This was one on Ben’s few blemishes on an overall great performance as he throws the ball high over Harris’ head, making him an easy target for the defender to uproot in the air and force the incompletion. Much like the long pass to Diontae Johnson, Ben will have to be more cognizant of throwing more of a straight line on instances like this to avoid putting his receiver in harm’s way or overthrowing his intended target.

However, there were moments where you saw Ben make the necessary adjustments to his throwing motion like on this dump-off pass to Najee Harris out of the backfield. Ben sees Harris coming across the middle of the field and adjust his arm angle to hit him in-stride and throw through the window, giving Harris plenty of room to run as he proceeds to take the ball up the sideline on the big catch-and-run.

To cap off his performance on the night, Ben manages to find Freiermuth again in the end zone for his second touchdown pass. He takes the snap from the shot gun, recognizing Freiermuth is the receiver to target on this play as he later stated in his post-game press conference. He lets the ball go as his receiver breaks to the top of his route, putting it over top of the defender’s head in coverage and places the ball on the outside shoulder of Freiermuth who makes an impressive catch, spinning around to make the grad over the shoulder and come down with both feet in-bounds for the score.

Overall, there was a lot of good to be taken from Ben Roethlisberger’s brief performance on Saturday against the Lions. We got to see him operate well in Matt Canada’s offense, taking shots down field and connect on the deep ball. He showed mobility in the pocket and create outside of structure whilst still taking what the defense was giving him on the short, underneath throws we have become accustomed to seeing over the past couple of years.

I would think it’s fair to say that Ben put the narrative that he is “done” to bed, showing he can still play at a high level and is capable of leading an offense that has an embarrassment of riches when it comes to offensive weapons to score points and put the team in position to win games.

What are your thoughts on Ben Roethlisberger’s performance against the Lions Saturday night? Do you think he has been wrongfully attacked in the media and has shown he can still play at a high level? Or are you in the camp that this was just a preseason game and that he likely can’t keep it up for an entire season? Please leave your thoughts in the comments section below and thanks again for reading!