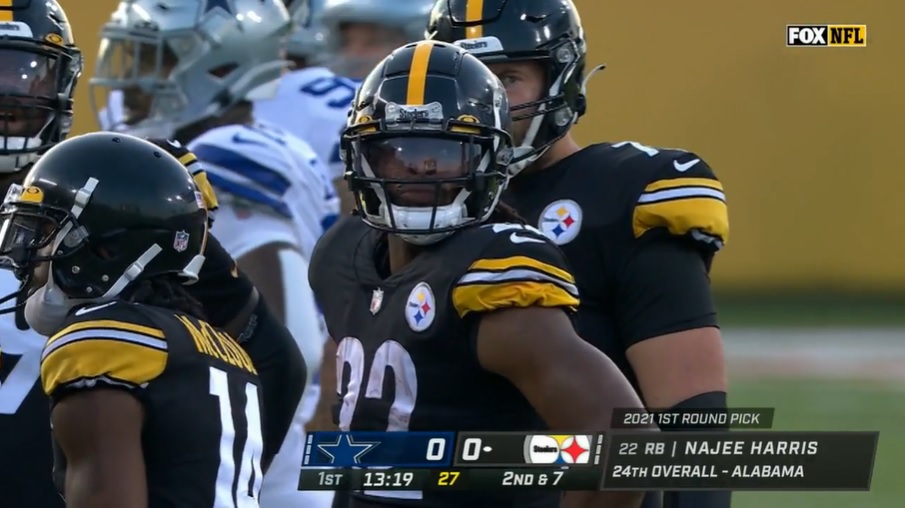 The moment of much anticipation came on Thursday night when the Steelers kicked off preseason action against the Dallas Cowboys with rookie RB Najee Harris making his professional debut. Many speculated whether or not Harris would be allowed to suit up or play more than a couple snaps, but the Steelers’ first-round selection played well into the second quarter.

On Harris’ first NFL carry, we got to see his size and power as he broke through the LOS and executed a good jump cut to the right and made his way into the second level of the defense, putting his head down as he was met by multiple defenders, and kept running his legs to finish with a six-yard gain on the play. Nothing crazy as far as yardage goes, but you love to see his effort combined with his strength and determination to push the pile and get an extra couple yards to maximize the run.

We see a similar theme here on this next carry by Harris on the inside draw. He takes the handoff in the backfield and doesn’t waste any time getting upfield, sidestepping again to the right with a defender coming to fill the hole, running off the backside of #81 Zach Gentry and managing to power his way forward for another positive gain. Again, you see Najee take on contact just a yard from the original LOS, but he somehow plows his way to a five-yard pickup. This physical running style epitomizes Harris’ game of pushing the pie and falling forward, much like I referenced in film room earlier in the offseason highlighting his ability to excel in short-yardage situations.

On this next run, we see the elusiveness that Harris was touted for coming out of Alabama which is rare to have for a back of his size. He gets the ball on 2nd-and-10 and starts running to the right side of the line. He sees that #14 Ray-Ray McCloud is unable to sustain his block but manages to evade the defender with a hesi-step and then shoots forward on the right side, putting his shoulder down right into the second defender coming to meet him and churns his legs on contact, picking up a couple extra yards like we have become accustomed to see him do. Overall a great rep showcasing Harris and his ability to run both with power and finesse.

Here on this outside zone run to the right side of the formation, we see Harris show his patience in following his blockers upfront to the sideline, using his vision and awareness to allow the blocks to take place before attacking forward once he has no more room along the sideline, getting the angle on the corner and fighting through a tackle attempt by #11 Micah Parsons to pick up the first down. Now both #53 Kendrick Green and #71 Joe Haeg were unable to make their blocks, most notably Haeg missing the combo block up to Parsons who evades him in pursuit of Harris. Should Haeg have made his block, Harris would likely have been able to spring the run up the sideline for even more yardage. Still, you like to see Harris making the most of the situation and still able to move the sticks, battling to get to the yard to gain rather than simply running out of bounds like he could have on second down.

While Harris may have only mustered 22 yards on seven carries (3.14 YPC), he showcased the skillset we praised him for coming out of Alabama: Running well behind his pads as a physical runner that has no problem taking on contact and finishing his runs falling forward to get every single yard possible. While being an effective short-yardage power back, Harris also showed his impressive elusiveness for his size, displaying the vision and patience reminiscent of another former Steelers running back who went on to have a productive several seasons with the team.

He looked fast coming out of the backfield in the passing game, whether it be out to the flat or over the middle. He ran his routes with urgency like you would see a wide receiver run his routes, much like I highlighted in his receiving film room breakdown earlier this offseason. Harris also was strong in pass protection when asked to stay in a block, being aggressive in and willing to stick his face in the fan with blitzers coming off of the edge or up the middle. There were some instances where he needs to play with better positioning in terms of sealing off defenders with his shoulders when blocking, but the want-to and mindset were there which are encouraging signs for any rookie running back in their first game action in the pros.

Now I will recognize that Harris’s debut was far from anything spectacular, notching modest gains on the ground and not being able the shake a defender in the open field on his lone reception of the night. That being said, we know Harris isn’t going to blow anyone away with blazing speed, but rather win by wearing down defenses, being efficient with the touches he gets turning three-yard gains into six-yard gains. As long as he has a successful run rate as the great Dave Bryan often references, and continues to be productive in his utilization in all phases of the game as a runner, receiver, and blocker like we witness Thursday night, Harris looks to be in line for workhorse back duties like we all expected in 2021.

What are your thoughts on Najee Harris’s debut? We’re you personally underwhelmed by his performance or do you think he did well in the action he saw during the Hall of Fame Game? As always, please leave your thoughts in the comments section below and thanks again for reading!