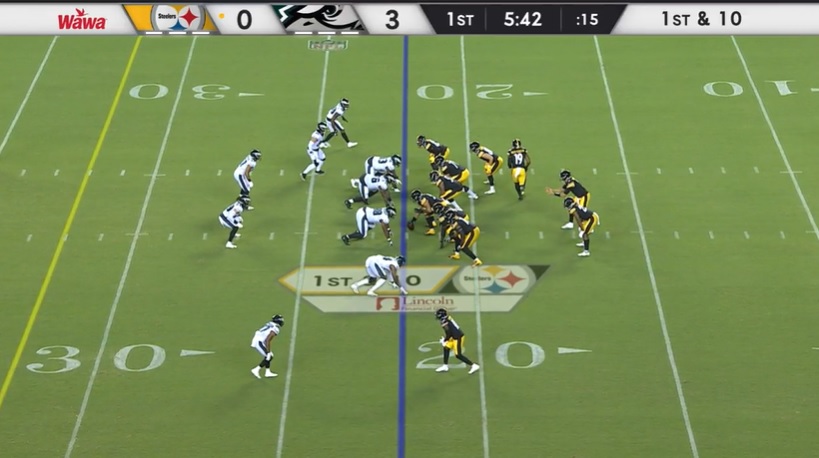 The Pittsburgh Steelers aren’t completely tipping their hand of what their offensive scheme will look like under new OC Matt Canada. Especially considering Ben Roethlisberger has to yet to play this preseason, though that’ll change later tonight.

But something Canada did repeatedly last week against Thursday really caught my eye. It wasn’t ground-breaking or earth-shattering. But something overdue to see in Pittsburgh. Under Todd Haley and Randy Fichtner, too many routes were independent of each other. Asking each guy to win their route, which became a big issue against man coverage, especially in 2019 when the WR group was decimated by injury. Antonio Brown could do it in years past. Tevin Jones…not so much.

In my offseason review of Canada’s offense, I noted how well he used spacing concepts to free up defenders. And I saw that versus the Eagles. Spacing concepts from bunch looks. This does three important things for the pass game.

1. Man/zone identifiers. Using pre-snap motion to clue his QB of the coverage he’s seeing.
2. Triangle reads. Makes for an easy, half-field progression for his QB. He can see the whole route tree without having to turn his head/hips/feet and process all new information.
3. Easy throws and free releases. Receivers running free off the line, high-percentage completions.

First one. First-team offense in. Trips bunch right to the field. JuJu Smith-Schuster orbit/return motion from left to right. Cornerback doesn’t walk with him so it’s a zone-clue for QB Mason Rudolph. And that’s what the Eagles run, zone coverage.

Smith-Schuster, initially #1 on the snap (the furthest outside receiver) becomes #3 (the furthest inside receiver), running under TE Eric Ebron and in front of TE Pat Freiermuth. Because of the bunch distribution, all three receivers get a free release off the line.

Smith-Schuster finds the soft spot in the zone and sits down, showing his numbers and Rudolph hits him over the middle. A little YAC turns it into a strong pickup on first down.

Same idea here. Trips bunch right. WR Isaiah McKoy return motion and again the QB gets a zone indicator. Same design and spacing, McKoy running under the point man, over the tight end, but Dwayne Haskins hits Pat Freiermuth for a six yard gain on a curl route. Easy read and completion for Haskins against soft zone coverage and it’s a successful gain on 1st and 10. Puts them in 2nd and very manageable.

Exact same concept here. Same bunch, same route combination, same zone clue. The only issue here is there’s slight miscommunication between Haskins and WR Cody White. Haskins wants him to site between the two linebackers but White settles early. Pass is off-line and incomplete. Put this more on White than I do Haskins.

Finally, Canada goes back to this well on 3rd and 4. Possession, gotta-have-it-down. Different route combination and no pre-snap motion here. Two clearout routes to open White underneath on a curl, sitting down at the sticks. And again, the bunch creates a free release.

Five step drop, a hitch, and fire to Haskins against the soft zone look. Complete and the offense moves the chains.

Again, not pretending Canada is doing anything radical or innovative here. But a good coach doesn’t have to overthink things and prove he’s the smartest guy in the room. Sound route distributions and an easy read for a QB is all you need. Certainly got the job done. Excited to see Canada combine the talents of this receiver room with good scheme. That’s a win/win.