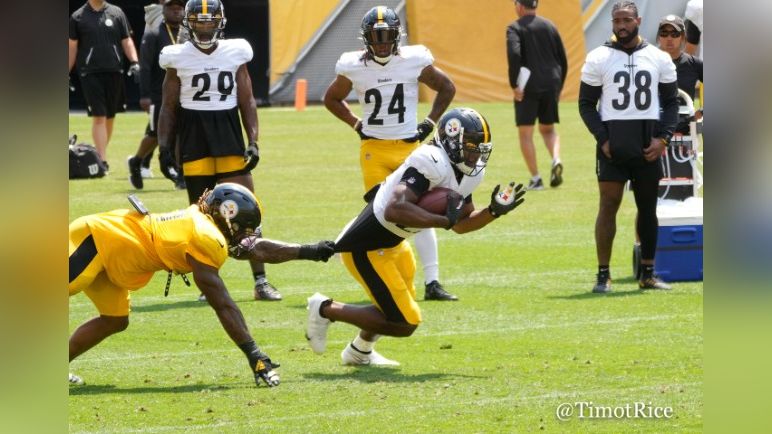 At this point in his time with the Pittsburgh Steelers, it’s put-up or shut-up time for fourth-year running back Jaylen Samuels.

In a crowded running backs room where he appears to be the odd man out — and is really generally hanging on due to the Matt Canada connection — Samuels is facing the possibility of being out of a job come camp cutdown day.

Knowing that, it was a bit disappointing to see the veteran running back get off to such a poor start in the preseason against the Dallas Cowboys in the Hall of Fame Game. He looked disinterested throughout and really lacked overall burst and explosion, which matched his overall tape from his time in the NFL.

Thursday against the Philadelphia Eagles though, Samuels looked much better and flashed some of his abilities running the football and catching the ball out of the backfield, giving him a semblance of staying power in the No. 4 running back battle for the Steelers, assuming the top three are rookie Najee Harris, second-year back Anthony McFarland, and third-year running back Benny Snell Jr.

Samuels finds himself in a tightly-contested battle with veteran Kalen Ballage, who brings more power and speed to the position overall.

However, Samuels is a bit of a dual threat and has that familiarity with Canada. On Thursday against the Eagles, Samuels looked decisive as a runner, ran well behind his pads and forced a couple of missed tackles on the night, looking like the Samuels of 2018 against the New England Patriots as a rookie.

While it is true that the Steelers’ second-string offensive line dominated throughout the game against the Eagles Thursday, Samuels had to take advantage of some rushing lanes. Here on a draw on second and three, Samuels does an outstanding job being decisive and getting upfield, rather than worrying about finding the best lane and moving the chains.

He does a good job getting skinny to slip between the blocks of Kevin Dotson and Pat Freiermuth, protecting the football in the process. He runs hard here, spinning out of the arm tackle for the gain of 12 yards, jump-starting a strong night for the veteran running back.

On the very next play, Samuels showed some patience to let the blocks in front of him develop.

In years past, Samuels was impatient and would run right into the line of scrimmage. On Thursday, he looked very comfortable overall working with Dwayne Haskins and running behind the second offensive line unit. Here, he shows patience to let Dotson and Freiermuth pull left to right, clearing a lane to reach the linebackers for the gain of seven yards.

Later in the game, Samuels flashed the ability to make a defender miss in space, something he struggled to do following knee surgery in 2019 and throughout the 2020 season.

It’s just not part of his game.

On Thursday though, he did a great job in space here catching the check down from Haskins before then forcing a missed tackle right away, allowing him to move the chains and duck out of bounds for the 17-yard gain.

On the same drive down near the goal line, Samuels showed off some power, blowing through the line of scrimmage to lower his shoulder and push towards the goal line.

I have very rarely seen that type of decisiveness and leg drive from Samuels, so that was a pleasant surprise. Though he did not get in on the run, one play later he slammed into the end zone for the score, putting the Steelers on top of the Eagles in a game they’d go on to win.

On Samuels’ final touch of the game, he did a great job taking what was there, running north and south, which should endear him to Canada, Mike Tomlin and the rest of the Steelers’ coaching staff.

The amount of push and movement the Steelers’ offensive line gets up front here is quite impressive, but you need a decisive running back that knows when to take what’s there, rather than trying to hit the home run on plays like this where there’s so much space initially.

Kudos to Samuels for bouncing back in a big way against the Eagles on Thursday, putting up a fight for the fourth running back’s job. We’ll see if he can continue to stack games here down the stretch and hold onto his job, but at the very least Thursday’s performance was a great step in the right direction.