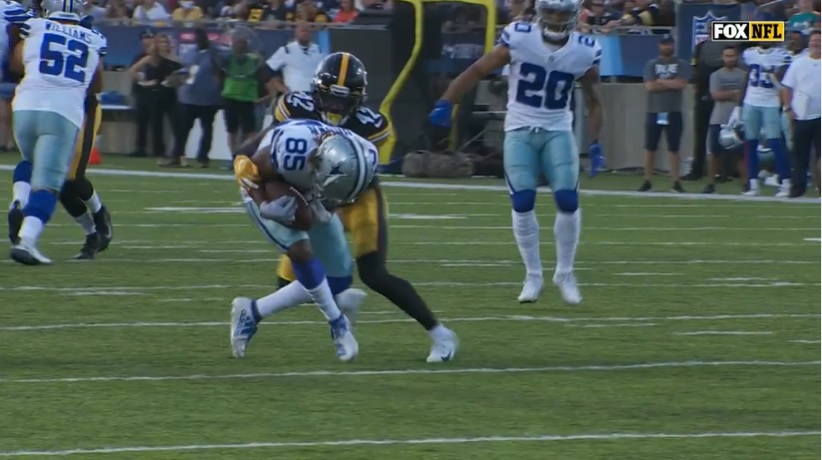 Entering the 2021 Steelers training camp, few players received more hype than James Pierre, a second year UDFA cornerback, seemingly poised to take on a larger role after a promising rookie campaign which saw him record 10 tackles, a tackle for a loss, and a pass breakup. After reports of splash plays made by Pierre through the early portions of camp, I, among others, was extremely excited to evaluate his preseason debut against Dallas.

Ultimately, Pierre answered the call, fielding an encouraging performance which saw him record four tackles and an impressive third down pass breakup, along with another that I believe he could have been given credit for. While there were certainly some inconsistencies in hip mobility and eye discipline, Pierre posted a solid debut performance which he can look to build on as the preseason continues.

Today, we’ll be taking a deep dive into Pierre’s performance on a play by play basis, evaluating positive takeaways from Thursday night’s debut, as well as highlighting some areas for improvement for the teams second preseason game against the Philadelphia Eagles.

One of the standout traits in Pierre’s game thus far in his young career has been his relentless physicality, both on special teams and at the cornerback position. Early in the game against Dallas, aligned as the overhang defender to a nub tight end set to the field, Pierre stays patient at the snap before diagnosing a run, stepping up to outside contain before folding inside to the vacated D-gap and shooting low to cut the back down after a gain of five yards. Although Pierre had fulfilled his responsibilities on the play after forcing the runner to cut downhill into his help, he is a player who invites contact, and it was great to see him get involved in the action early.

While cornerbacks are often judged on a fixed results basis, oftentimes, particularly at the NFL level, receivers can make impressive combative catches regardless of the defender’s presence. With the Cowboys facing an early 3rd and medium opportunity, Pierre draws a matchup against the boundary X-receiver in a Cover 2 man under scheme. With help over the top, Pierre aligns at four yard depth on the sticks, staying patient with a read step before triggering on the slant route, and arriving to play the pocket with his left arm, securing the tackle and forcing the receiver to make a difficult combative catch. While the reception was ultimately made for the first down conversion, Pierre’s twitchy change of direction skills and relentless effort in playing the pocket are on display here.

As I touched on previously, while Pierre’s performance certainly showcased more positives than negatives, sporadic inconsistencies in his eye discipline got him into some trouble at times. Later in the same drive, aligned in off man coverage to the boundary against the Cowboys stack alignment in a Cover 1 scheme, Pierre aligns just in front of the sticks at six yard depth on third and long. At the snap, Pierre shuffles laterally to match the receivers inside stem before biting inside and getting his eyes caught in the backfield at the top of the route, ultimately allowing noticeable separation on the seven cut.

While he was not targeted on the play, Pierre will need to further emphasize proper eye discipline as the preseason continues, as even a momentary slip up in that facet can create some downright embarrassing reps for corners at any level, much less the NFL. Moreover, Pierre needs to understand that in a Cover 1 scheme, his help is inside with the post safety, which, particularly in the red zone, should allow him to deploy heavy outside leverage and protect away from his help, as I outlined in a previous film room on Joe Haden.

On the next drive, Pierre allowed an explosive play on a bang eight post route, which particularly from a cut split, where the cornerback is forced to play with heavy outside leverage, can be one of the hardest routes in the game to cover. At the snap, Pierre weaves laterally, gaining depth and working to protect his outside leverage against the receivers stem, before opening to carry the receiver vertically.

While TV tape cuts off as he begins opening his hips and resumes at the top of the route when separation has been created(blame NFL Game Pass!)It appears that Pierre allowed separation as the receiver created space with a second level release, using Pierre’s momentum against him to create a natural push off at the hip and create separation inside.

Ultimately, Pierre could have made his life easier by working to stay on the upfield shoulder, where he could provide resistance to the receivers inside stem from “top down”, rather than at parallel, where the receiver is at a significant advantage. Regardless, Pierre’s ability to close quickly and finish with a violent punch on the football shows his ability to recover from out of phase, and I’d be willing to bet that he forces a fumble on a long reception at some point this season.

In evaluating his late season work from this past season, I found myself extremely intrigued with Pierre’s potential to flourish in press coverage due to his natural patience, efficient footwork, and active hand usage. Below, aligned in man coverage to the field, Pierre finds himself matched up with tight end Dalton Schultz.

Understanding that he is up against a slower and less athletic player who will struggle to threaten him vertically, Pierre stays patient at the line, matching the tight ends inside release with a smooth soft shoe press before coming to balance, and deploying a two hand jam to disrupt the release into a fade route.

Facing a favorable matchup on a possession down, it is encouraging to see Pierre be aggressive and sit on underneath routes, understanding that the Cowboys are likely to work to the sticks and that Dalton Shultz can’t threaten him vertically even if he wins at the line of scrimmage.

Once again operating out of a Cover 2 man under scheme on the Cowboys next third down attempt, this one coming in a third and long situation, Pierre disguises his alignment pre snap, standing seven yards off with his eyes locked on his man. At the snap, Pierre walks down to four yards depth and assumes a shuffle technique from outside leverage, allowing him vision of both the receiver and quarterback.

Triggering on the receivers break, Pierre closes ground efficiently with an efficient break and finishes in phase, leaving the ground to bat the football away with his right hand. While a better throw may have given the receiver a chance at a combative catch, Pierre’s route recognition and fluidity in and out of his breaks kept him in phase all night, making him a tough target, particularly on possession downs where he can gauge the offense’s situational tendencies.

As we touched upon earlier, receivers aligning in tight splits and running in breaking routes can be great man coverage beaters, as the cornerback is forced to play with heavy outside leverage. Thus, most coaches will teach that a receiver aligning in a cut split is always doing so for one of two reasons, A. to create space for an outside breaking route or B. to create leverage on shallow or intermediate crossers traveling across the formation. Below, once again in a third and medium situation, Pierre follows his man in motion into a tight stack to the boundary in a Cover 2 man under scheme.

Once again understanding situational tendencies, at the snap Pierre avoids the pick route, staying glued to the receivers hip on the shallow crosser, and forcing the quarterback to a lower percentage throw on the deep out route. Corners are taught to work the receivers upfield shoulder to flatten their route and keep them short of the sticks in these situations, and Pierre does a great job of doing just that here.

On the next rep, Pierre produces another pass breakup which I had him credited for, although the stat sheet would disagree, on a rep where he ultimately could have potentially secured an interception with an on target throw. At the snap, Pierre, aligned in man coverage to the boundary, matches the receivers outside release before opening his hips to the sideline, closing to the receivers chest, and staying active at the catch point to force an incompletion.

While he likely could have had an interception if he had soft shoe’d and secured position on the upfield shoulder, he did a great job to remain calm and contest the pass errant throw without drawing a pass interference, a task much easier said than done in said situations.

On the next rep, once again operating out of a man coverage assignment against a cut split receiver to the boundary, Pierre shows great change of direction to stay in phase and contest a whip route, forcing another long third down attempt just before half. At the snap, Pierre matches the receivers inside release, extending a two handed jam before diagnosing the whip route, changing direction fluidly, and diving to finish in phase and tag the receiver to the ground, limiting the catch to a minimal gain of one yard.

This rep shows how effective Pierre can be when his eyes stay consistent, as his change of direction ability and physicality at the catch point are both clear strengths in his game.

Ultimately, Pierre answered the bell in his first preseason action of the 2021 season, showcasing the change of direction ability, patience, ball skills, and physicality necessary to contribute positively this season. While he needs to work on maintaining consistency in his fundamentals, including eye discipline and understanding where his help defenders are, he has established a solid foundation to build upon for the remainder of this preseason.

While the team certainly appears to have plans for Arthur Maulet and Antoine Brooks Jr. in the Nickel, I will continue to state that I believe a combination of Pierre, Haden, and Sutton is the best Nickel package this team can field for this upcoming season. Watch Pierre closely Thursday Night against the Philadelphia Eagles and see if you can spot improvements in his play to play consistency!