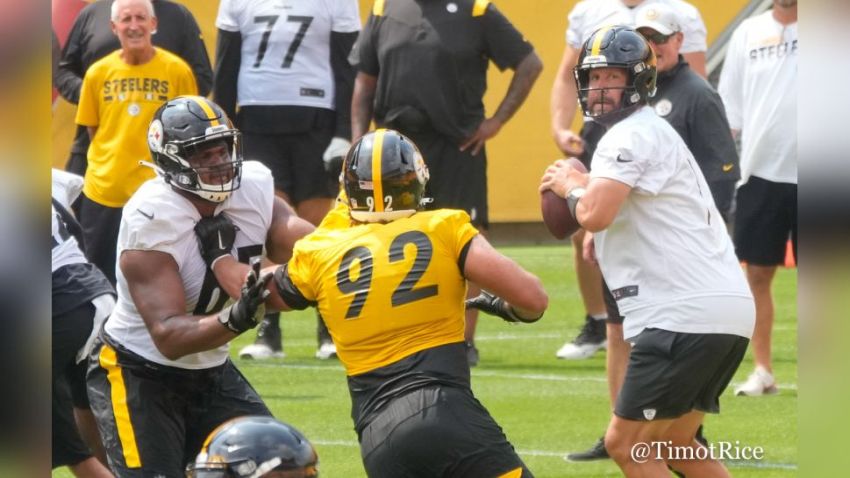 When the Pittsburgh Steelers decided to trade up in the fifth round of the 2021 NFL to select Wisconsin DL Isaiahh Loudermilk, the pick left many in the draft community and those who follow the Steelers closely quite puzzled. Loudermilk was widely regarded as a late-round prospect that could potentially go undrafted, so the wiliness of Pittsburgh to part with a fourth-round selection in the 2022 NFL Draft to move up to pick him didn’t make a lot of sense. DL Coach Dunbar as well as GM Kevin Colbert later explained what attracted them to Loudermilk was the size and length that he possessed, being the stylistic fit Pittsburgh typically looks for in a traditional 3-4 DE.

Given the relative depth at the position with entrenched starters Cam Heyward, Stephon Tuitt, and Tyson Alualu along with key reserves Chris Wormley, Isaiah Buggs, Carlos Davis, and Henry Mondeaux, the selection of Loudermilk was all-the-more surprising given the team needs in the secondary that had yet to be addressed at the point in the draft. However, the team has made known their desire to walk away from the draft with Loudermilk as a guy they couldn’t afford to wait on, and reports from camp suggest that he has been playing well, so I am willing to see this situation play out.

Now let’s break down Loudermilk’s performance vs the Eagles from last Thursday. When I first watched the game, I wasn’t overly impressed with his showing, thinking he was getting pushed around at the LOS and was only average as a disruptor outside of the sack he was in on late in the fourth quarter. However, I kept seeing comments post-game on the Twitter machine saying that Loudermilk had a great game, being strong at the point of attack against the run and pushing the pocket as a pass rusher. Given this discrepancy of opinion, I wanted to study the limited snaps Loudermilk played to have a better understanding of how he played Thursday night.

The first thing I recognized when watching Loudermilk’s film is his utilization up and down the LOS. He seemed to be lining up in the Cam Heyward-role, kicking inside over the guard on some snaps and playing more of a 4i-5 technique on the end of the defensive line on other snaps. On this play, Loudermilk lines up inside shade of the LT and engages with the LG on the snap of the ball, displaying a good initial punch and holds his own well at the LOS to stand up the blocker while throwing his right arm through on the rip to try and disengage from the block.

There were several moments during the game where Loudermilk did generate a push of the pocket as a pass rusher. His most impactful play came on this 2nd-and-long pass attempt where he and #73 Carlos Davis run a stunt where Loudermilk acts as the crasher and Davis loops to the outside. However, the Red Sea parts right in-front of Loudermilk whose job is to take on the block as he runs straight into the QB with #48 Quincy Roche to record a half sack on the stat sheet.

While there were some moments that did stand out on Loudermilk’s tape including a batted pass at the LOS, I came away relatively unimpressed with his play overall. Loudermilk stands at 6’7, 293lb per the Steelers roster, but lacks the ideal strength and anchor you want to see from an interior defensive lineman. He naturally has great height, and he has a bad tendency to stand upright on his pass rush or get stood up against the run, playing with an elevated pad level which makes it easier for blockers to displace him off of his spot. Good example here in the third quarter on the inside run play where the RG washes Loudermilk down the line and out of the play with Loudermilk playing straight up off of the snap, giving the offensive lineman his back and not holding his spot on the rep.

Here is another example later in the game where Loudermilk lines up on the end of the LOS in-between the LT and LG where he does a good job getting hands-on with the guard off of the snap but gets shocked back on the side by the LT, bouncing back and giving ground while being unable to anchor in or use his hands to fight off of the block. He gets washed inside as the running back bounces it outside to where Loudermilk was supposed to be, recording a successful run on first down. Taking on a double team is no easy task for any defensive lineman, but the lack of strength in the lower half to hold his spot is what concerns me on this rep.

Another play where the offensive lineman gets underneath Loudermilk and his long frame, turning him around and out of the play as RB #32 Jason Huntley gets the corner and turns it up the sideline for a big play. Thankfully, the defense gets bailed out on a holding penalty as Huntley attempts to turn the corner to prevent the long run.

When Loudermilk’s initial rush fails, it appears as if his motor dies out with it in terms of pursuit of the football. He isn’t active with his hands, trying to fight off blocks but relies too much on his eyes to see where the ball is going, becoming a bystander rather than playing run-and-chase football. Watch this rep as Loudermilk attacks the left side A-gap but gets stood up by the C and LG, having no leg drive on contact to push the pocket and gets high and leans into the block, giving ground and eventually getting tossed to the turf as Huntley breaks the run to the right side.

Overall, I came away far less impressed than most with Loudermilk’s showing against Philadelphia. Sure, he did make an impact with a batted pass and got in on a sack, but as the great Dave Bryan always says, context matters. The quality of the sack wasn’t that impressive and outside of a couple reps where he held his own at the LOS, we regularly saw Loudermilk stand up, give ground, and get displaced against the run. That’s isn’t going to fly for AFC North football with the Browns and Ravens looking to run it down this team’s throat.

Again, I recognized that I may be a little critical of Loudermilk’s play, but going back to the tape at Wisconsin, we recognized that this was a player that needed a lot of work in terms of technique and needs to get physically stronger to hold his own at this level. Those statements still hold true today, and while the team invested a future fourth-round pick to trade up to get him, I don’t see how he contributes to the team this year and isn’t a gameday inactive for a majority of the 2021 campaign.

What are your thoughts on Isaiahh Loudermilk and his play against the Eagles? Do you think that I am be over-critical of his performance, or you in agreement that the criticism is justified? Do you think that he has a roster spot secure or that he could be a candidate for the practice squad in 2021? Please leave your thoughts in the comments section below and thanks again for reading!