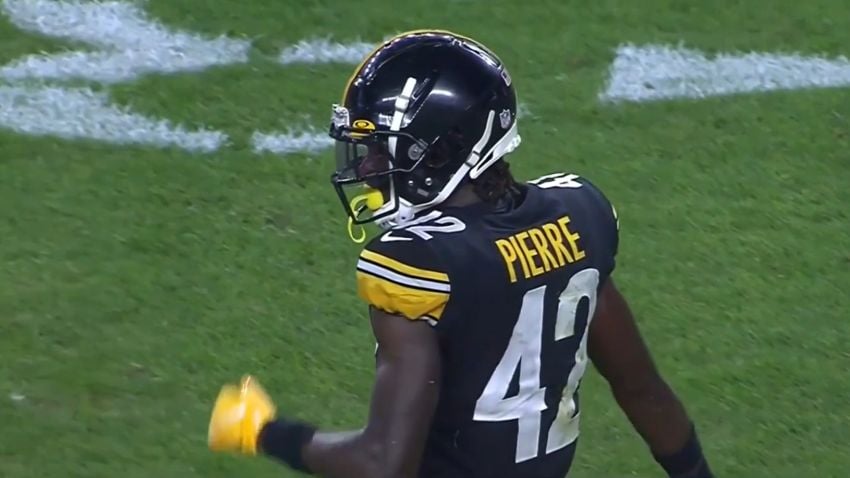 One player that doesn’t need to worry about his roster spot being in jeopardy come final cutdowns on Tuesday is CB James Pierre. The second-year UDFA out of Florida Atlantic has received rave reviews throughout training camp for his leap in play from his rookie season. He has constantly been around the football in training camp practices and has showcased that physicality needed to hold up against prototypical WRs on the boundary at the NFL level. Still, Pierre has had an up-and-down preseason showing thus far, having moments where he displays that aggressiveness in run support, but also can get too aggressive and allow separation in coverage which has led to easy completions.

Seeing that Pittsburgh’s second-string defense had the matchup of Carolina’s starting offense on Friday night, Pierre was presented to opportunity to show what he can do against talent he would hope to see on a weekly basis during the regular season as a potential starting outside CB in nickel and dime looks. It’s safe to say that Pierre was ready for the occasion, as Pro Football Focus charted Pierre for 40 defensive snaps played on Friday night, allowing three receptions for a total of three receiving yards while recording three tackles.

It was an impressive showing for Pierre who was one of the few defenders out there that didn’t seem overmatched against the Carolina Panthers offense. Pierre particularly made a living coming downhill in run support as well as in the screen game, showing an urgency to pursue the ball and be a willing tackler. Here is one example on a quick check down pass to the back to the left side of the field where Pierre gets off of the block by #11 Robby Anderson and makes the tackle in open space.

Later in the drive, Pierre makes another great play on this screen pass to #2 D.J. Moore, staying with Moore as he tries to sell the vertical release and turns back to the QB to catch the pass. Pierre is there almost immediately, wrapping up the receiver and taking him to the ground for no gain on the play.

Pierre had a nose for the football against the run as well Friday night, recognizing the run and pursuing the ball carrier to get in on the play. Take, for example, this run fill in the second quarter where Pierre comes down from the secondary to meet #30 Chuba Hubbard near the LOS, squaring up the runner and breaking down to make a good form tackle as he takes out Hubbard’s’ legs from underneath him for the stop.

A little later in the second quarter we see Pierre make another aggressive play on Hubbard, this time as a receiver out of the backfield. Hubbard runs the swing route to the left side of the field, but Pierre sniffs it out almost immediately once the ball is thrown, managing to work around the block attempt and chops down Hubbard in the backfield for nearly a five-yard loss on the play.

A lot of Pierre’s splash plays came as a tackler on Friday night, but he also had a lot of success in coverage. As you know, cornerbacks are at their best when you don’t hear their names often, meaning they aren’t giving up receptions. That was the case for Pierre, who handled both Anderson and #88 Terrace Marshall Jr. well when asked to cover them on the outside. Both receivers have great length and speed, but Pierre’s length and technique in press man coverage won out. Here is one example where Pierre does a great job on Marshall, hitting him with the left hand as he gets off the line and carries him up the sideline, staying on his hip the entire time.

What really sold me on Pierre’s performance Friday night after being fairly critical of him so far this preseason was his stellar communication. There were multiple instances where you saw him signaling calls out to the rest of the secondary and adjusting to a shift or motion. A good example of that occurs on this play where Pierre follows Anderson who motions from the boundary to the trips formation on the left side, staying patient in coverage until Anderson breaks inside as Pierre follows, staying right on his left hip in coverage and takes him out of the play as a potential target

Pierre’s physicality as a run defender, technique in pass coverage, and awareness to communicate with the rest of the defense what he saw all combined for an impressive performance on an otherwise disappointing night for the defense as a whole. Pierre rose to the occasion and showed he is capable of playing against quality wide receivers on the outside, as the Panthers boast one of the better receiver trio’s in the league. Given his play throughout training camp and capitalizing in the final preseason game, it’s safe to say that Pierre has earned the right to start on the outside opposite of Joe Haden when Cam Sutton kicks inside to the slot in the team’s sub package defense.

What are your thoughts on James Pierre’s performance against the Carolina Panthers? Do you think that he has played himself into the starting line up? Is there any chance that Pierre could possibly overtake Sutton as the starting outside corner in Pittsburgh’s base defense? Please leave your thoughts in the comments section below and thanks again for reading!