Today I am finishing my “Offensive Line Study Series”, here are the links to the other studies that I would recommend for full context of this study:

I wanted to dive deeper and get playoff value like my other studies. I also wanted to learn from these data points:

Some important things before the graph, the players in this study are the leaders in single season OFF Grade since 2016 with the most opportunity. I also focused on more recent players that have played since 2018, then how those players did over the five-year playoff sample size with the above datapoints. With that in mind, here’s what 2016-2020 looked like: 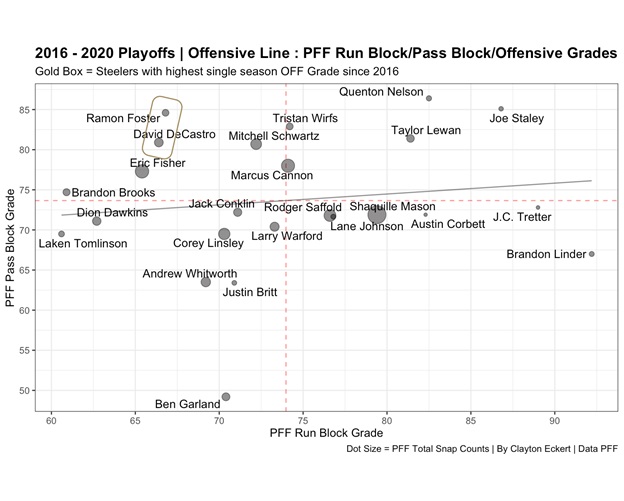 Like the first study, this graph gives us context of opportunity (dot sizes) and blocking grades (quality) but in winning situations. The gold box highlights DeCastro and Foster’s contributions in the 2016 playoffs and reminds us that we have only had two playoff games since 2017 (very disappointing ones at that). I also found it interesting that most of the highly graded run blockers had a smaller number of snaps. This leads me to believe that if these players get more opportunities in future playoff games, there could be a regression to the mean in most cases.

Now let’s look at this angle, who were the players that had the highest PFF OFF Grade by single season, which season did that occur in, and layering in full PFF playoff grades and previous studies:

This view allows us to see which playoff seasons the players graded the highest in, and how they did throughout the studies. Quenton Nelson was one of two players to show up in all the ranks, but he also had impressive top 20 ranks across the table. I realize this isn’t your typical best players for a single season type ranking, but I hope you enjoyed this unique view of some of the few offensive line stats available compared to other positions.

Now I would like to end with a fun final view. Taking Study 1.0 (2020 PFF blocking grades/snaps), Study 2.0 (2016-2020 SIS Total Points Earned/PFF blocking grades), and this study. Now I will rank them by position (as opposed to individually) for a cleaner final table:

If we look at the table by rows, we can get some fun hypotheticals. Especially the “top ranked offensive line”, I would definitely pay to see that! I also found it interesting that out of all the names (over 100), Villanueva and Pouncey landed on the same row (14). If you enjoy hypotheticals, let me know some of your favorite takeaways!

The offensive line studies have really allowed me to pay homage to the end of an era for the Steelers offensive line. Villanueva, Foster, Pouncey, and DeCastro were such a staple to our offensive success through the years, even before this sample size. To have that consistency in personnel and team value for that long is impressive, something I hope the casual fan noticed and appreciated. I really wanted to give them props and a personal thank you for being one of my favorite position groups of the team over the last decade.

Looking back at the entirety of the offensive studies I did this offseason, I am largely optimistic regarding the 2021 Steelers offense. The turnover on the offensive line is the one concern positionally for me, but this is mainly due to the unknown. It’s so exciting we can finally see this unfold and see how the line does, instead of the uncertainty in personnel this offseason that we haven’t had to feel in a long time.

This article wraps up my “Offensive Study Series”, I hope you have enjoyed it like I have! Thanks for reading and let me know your thoughts in the comments!