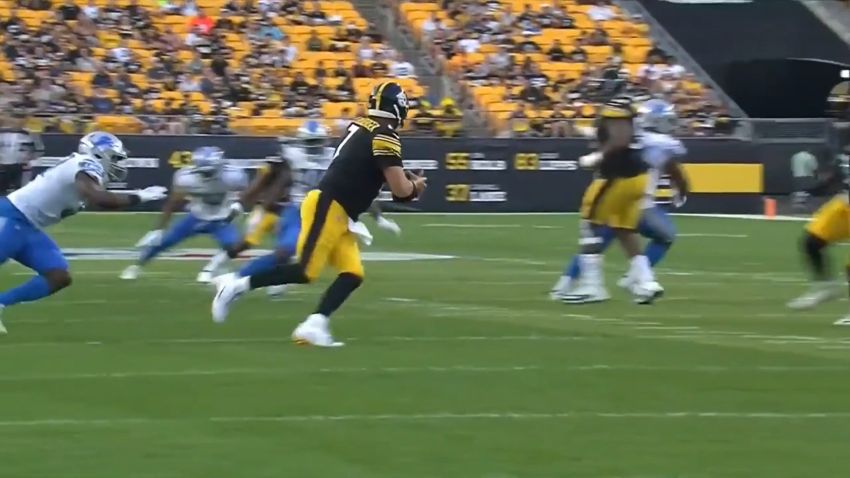 While he did have the opportunity to work with, and eventually behind, Alex Smith during his time with the Washington Football Team, it doesn’t quite compare for Dwayne Haskins now being paired with future Hall of Fame quarterback Ben Roethlisberger in his first season with the Pittsburgh Steelers.

On Wednesday, Haskins talked about how he has observed Roethlisberger for most of his life—as any relatively young football fan has—but also how he has watched how he was received when he played last week, and observed what he might be able to take away for himself.

“I’ve watched Ben since I was about ‘this’ tall”, he said with a low gesture of his left hand, “so for me it was kind of surreal just watching him come out there and watching him play and see how the fans were so excited to see him there, and how he performed. It kind of motivated me, really, to see how he got all the praise and love he did while he was out there”.

“And then I watched how he played. I try to emulate him a little bit as far as how he extends plays and how strong he is in the pocket”, he added, “how all the routes are alive no matter what happens in the play. It was fun just to see it actually happen in a game, because in practice it’s hard, because nobody can really touch him or tackle him and stuff like that. So for me to see it live, it was pretty cool”.

Roethlisberger might not be the worst influence out there. While he did have more college experience, they both came into the league with a lot to learn with respect to mastering the more cerebral aspects of playing the quarterback position at the highest level, and how to read defenses.

Haskins has seemed to indicate that the coaching that he received during his two seasons with Washington was somewhat limited, suggesting that the coaching he has gotten from quarterbacks coach Mike Sullivan and offensive coordinator Matt Canada (himself with an extensive resume as a quarterbacks coach at the college level) has helped him to take his above-the-neck game to another level.

He will get his biggest opportunity yet to showcase his progress as he starts the Steelers’ final preseason game on Thursday night. It remains to be seen how many starters will be out there with him, but he should face the majority of the Carolina Panthers’ starting defense, so it will certainly be a good challenge for him.