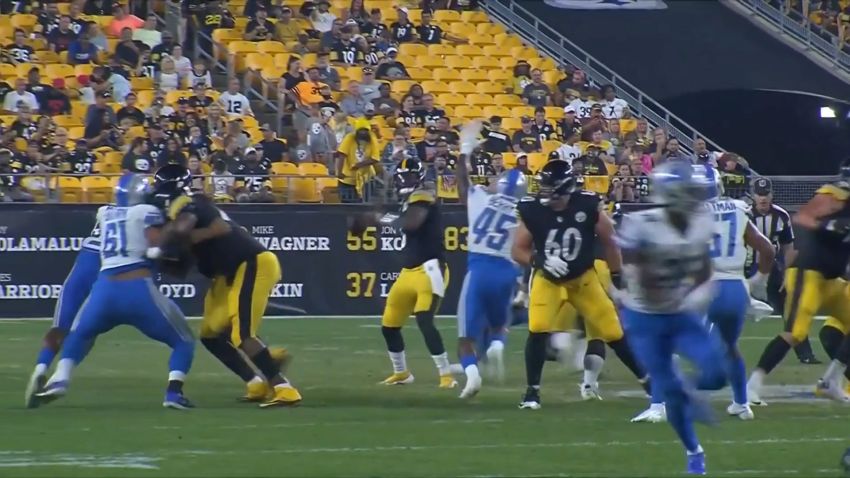 Dwayne Haskins came into the NFL as a first-round draft pick. He found his way to Pittsburgh as a Reserve/Future signing. He looked much more like the latter than the former in tonight’s loss to the Carolina Panthers, in which he started and played about three quarters.

The 15th-overall pick by Washington in the 2019 NFL Draft, Haskins found himself waived and unclaimed by the end of his second season last year. the Steelers decided to pick him up in a ‘something for nothing’ deal, basically is how head coach Mike Tomlin would later put it, and for most of the preseason and training camp, he was showing something. Last night was very different, but he hopes he’s shown enough overall to stick around.

“I feel like I’ve done a great job just showing that I’m coachable, showing that I’m wanting to learn, wanting to get better, and just trying to put things on film that can showcase what I can do”, he told reporters in speaking to the media following the 34-9 loss.

“Of course, the first three games I’m rather proud of, and of course how we started [tonight] is something I wanted better out of”, he continued. “The best thing I can do is hope that what I’ve done throughout preseason and throughout training camp is enough body of work to showcase how much I’ve improved”.

Through the first three preseason games, Haskins completed 28 of 42 pass attempts (with four of his incomplete passes being due to drops) for 271 yards, with one touchdown and zero interceptions. He also led the team to multiple other scoring drives on the ground, and some field goal drives as well.

It is undeniable that the offense moved better and scored more efficiently through three games with Haskins under center than with Mason Rudolph in at quarterback. but the Steelers didn’t even have Rudolph, their presumed backup, dress for tonight’s game.

In all, the Steelers’ four quarterbacks finish the preseason with five touchdowns passes, including two from Ben Roethlisberger on three drives played. Joshua Dobbs had one in the first game. Haskins has the other two, but the second came at the end of tonight’s loss when the Panthers were long past caring about the score.

Still, it’s not all about one game. While this was something of a showcase designed for Haskins, and he very much came up short, there is still all the rest of the tape out there, including the work that he put in during training camp, as well as in the classroom and with his teammates and coaches.