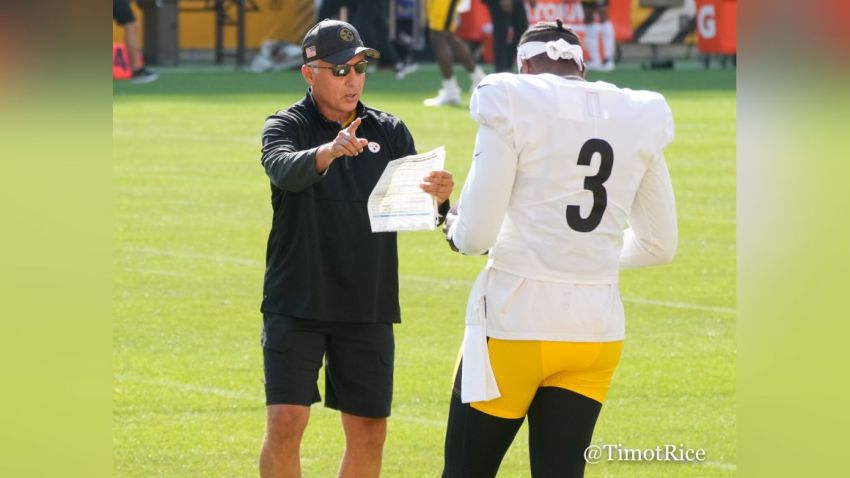 Ordinarily, the fourth preseason game in recent years has been the Joshua Dobbs Invitational for the Pittsburgh Steelers. This year, however, the honor is going to go to Dwayne Haskins, who figures to play the majority of the game after head coach Mike Tomlin announced that Ben Roethlisberger and Mason Rudolph would not be playing.

Haskins also spoke to reporters today, and the third-year former first-round draft pick talked about his growth since leaving the Washington Football team, and where he has seen that the most. “I would probably say my confidence”, he said, was where he has grown more than anywhere else, and the Steelers’ environment has been a catalyst for that.

“I feel like being here has been a great opportunity for me to just be myself and for me to be able to go out there and have fun”, he said. “I feel like when I do those things, you see it in my play, you see it in how I operate in and out of the huddle, how I talk to my teammates. I feel like it’s contagious in a way, where I have a lot of energy. I feel like that’s probably the biggest thing, that I’ve grown in this area, since being here. I feel like I’m a part of something here”.

While Washington drafted him in the first round in 2019, the regime who brought him in was already gone by year two, with Ron Rivera not tethered to him. There were clearly some issues in the relationship between Haskins and the organization, and it ended with his getting released at the end of the season.

It was enough to poison his stock, to the point that no team even attempted to claim him off waivers. The Steelers ended up signing him to a veteran minimum futures deal with no guarantees, but despite the minimal investment, he believes he is now in a place that is actually rooting for him.

“I really just trust in myself and believe in myself and taking a lot of time to self-reflect on things”, he said in what has contributed to his growing confidence. “Of course, being in a situation where people around you want to see you succeed, that’s probably the biggest thing”.

In fairness to Rivera and his staff, they inherited Haskins. The Steelers chose to bring him in. it’s not uncommon for new coaches to believe that certain players that they inherit on their roster are not a fit for what they want to do. But at the end of the day, it was clearly not a good environment for the young quarterback, and he feels much more comfortable, and confident, here in Pittsburgh.