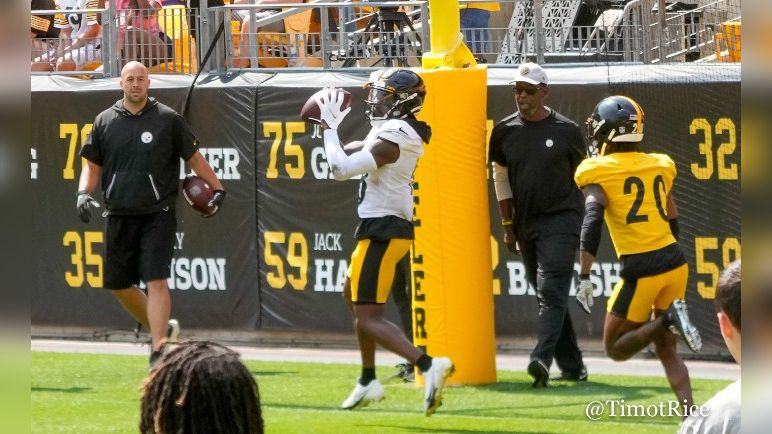 Diontae Johnson led the Pittsburgh Steelers in targets and receiving yardage last season. He finished with 88 receptions for 923 yards and seven touchdowns, all of them bettering his numbers from his rookie season. But everyone, including himself, knows he can take a much bigger bite of the apple.

His biggest issue last season was his hands, specifically his ability to hold onto passes. Varying by outlet, he was credited with dropping around a dozen passes last season, if not more, many having him with the most dropped passes of the season in the entire league.

There was even a point last season where he got benched for a half, before beginning to redeem himself over the final three games. He delivered big plays, including a big touchdown in a win against the Indianapolis Colts. Even in the playoff loss, he caught 11 passes for 117 yards, a career-high.

Sure, he’ll drop some passes again—everybody does—but that’s not driving him. He knows what he has to do, and what he can’t do again. “Last year is last year”, he told reporters following yesterday’s practice, regarding drops. “That’s how I see it”.

“I try not to focus on that”, he said. “I stick to my catching routine, make sure I’m out here before everybody 30 minutes before to make sure I get all those catches in, so when it comes time to practicing, I see a ball a certain way, I know how to adjust to it. Just by me doing that gives me the confidence, because when I see the ball, I know what to do. It’s not like I haven’t seen it before, so that’s what I’ve been doing”.

It will be interesting to see how the receiver dynamics play out this year, another year with all of these players together, and now in Matt Canada’s offense. Johnson emerged as a clear favorite target for Ben Roethlisberger, but Chase Claypool is going into his second season, and now they have two pass-catching tight ends and a pass-catching running back.

Whatever comes, he knows the only thing he can control is how he goes about his own business, and he still never lets go of the lessons he learned from former wide receivers coach Daryl Drake, who passed away suddenly during his rookie season before the man ever even got to see him in a preseason game.

“That’s the main thing, believing in yourself and knowing you can do those things, each and every day”, Johnson said. “My old coach, Coach Drake used to always say to shut out the noise. That’s all I’m doing this year. That’s what I’m focused on, and I’m looking forward to the season”.