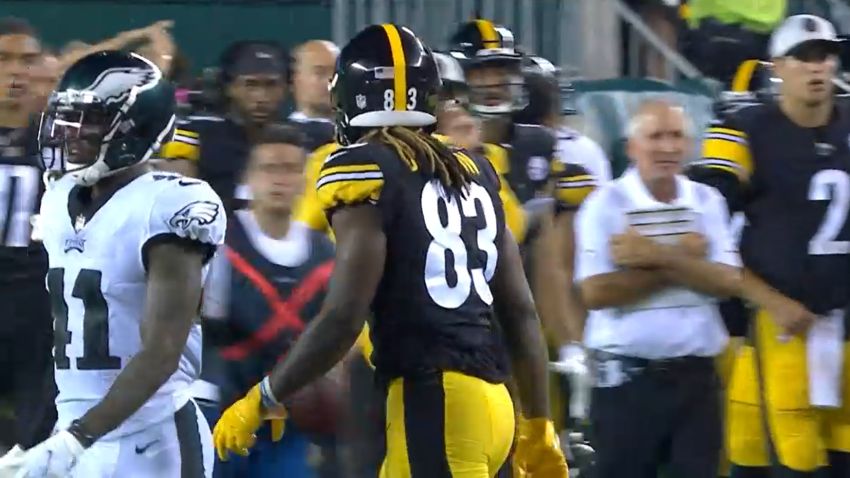 It’s not often that you have the opportunity to retain an entire depth chart at a position like wide receiver from one season to the next and actually be happy with what you have, but that is the position the Pittsburgh Steelers are in this year, particularly with their top four wide receivers, whom they drafted with Day 2 picks through 2017 to 2020.

As much talent as JuJu Smith-Schuster, James Washington, Diontae Johnson, and Chase Claypool offer, though, there is always the potential for that time that you need more help, whether due to injuries or otherwise. Ray-Ray McCloud appears to be set to return as the number five again, but there are candidates pushing for that job, or even forcing the Steelers to carry a sixth.

Young players like Anthony Johnson and Cody White, both of whom spent time on the practice squad last season, are opening some eyes, as are the rest, like Rico Bussey, Mathew Sexton, Isaiah McKoy, and Tyler Simmons. Johnson caught a touchdown pass on Thursday; Bussey should have had one if not for a pass interference penalty in the end zone. Simmons snagged one the week before.

“I’ve seen a lot. They’re showing that they know what they’re doing”, Johnson said of the depth receivers while speaking with Missi Matthews on the sideline on Thursday night. “We’re just giving them pointers and whatnot when we’re not in and just watching them. You see they’re making plays out there, so that’s why we’re just continuing and encouraging them and showing them the right things to do and what not to do”.

White led the Steelers with five receptions against the Philadelphia Eagles on Thursday for 39 yards, which included two key short third-down conversions. Johnson caught two passes for 38 yards during the game including a 22-yard touchdown. Bussey also added four receptions during the game for a team-high 45 yards.

Of course if any of them are to make the 53-man roster as a sixth wide receiver, they will have to prove their worth as special teamers, but many of them have already flashed. Sexton had a quality punt return in the first preseason game, while others like McKoy, Simmons, and Johnson have done well as coverage players.

Still, it will be very difficult to find room on the 53-man roster for a fifth wide receiver this year, with crowded rooms elsewhere on the roster, especially on the defensive side of the ball. I, for example, have 10 linebackers making the team, which is slightly more than normal, and four halfbacks is also a distinct possibility, which they did a year ago.