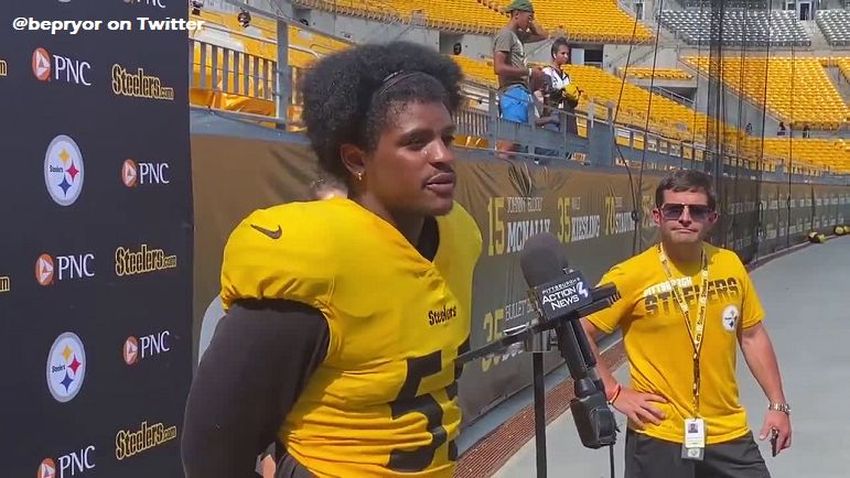 Pittsburgh Steelers head coach Mike Tomlin confirmed yesterday that third-year inside linebacker Devin Bush was slated to return to in-stadium play this week as they face the Philadelphia Eagles. With the former first-round pick addressing the media today, naturally, the topic that drew the most attention was…his social media activity.

Back in May or June, or whenever it was, Bush started posting more actively on Twitter, and said many things that people found either weird or objectionable, though the center of attention still appears to be the retweeting a video of a cat falling to its death as it attempted to escape the grip of those who were trying to rescue it.

And we’re still talking about all of this months later, only because people are still asking about it. And every other platform is covering it, which means we have to, as well. So if you’re wondering what Bush’s response was to questions about his social media usage, you can find it here.

Brooke Pryor of ESPN shared video of that segment of the media session, with Bush first being asked about comments from teammates implying that they were going to speak to him, and what those conversations entailed.

Talked with Devin Bush today about his *very* online summer and he said the team didn’t talk to him, at least that he remembered, about his social media usage.

“It’s my Twitter, so they can’t control it.” pic.twitter.com/OULlxYpx2P

“Reaching out, talking to me”, he said. “It was nothing crazy. Just kind of checking up on me and how I was doing, and that was that. He was then asked if he felt like he made fans mad (which, obviously, he did). “I don’t even know if they were real fans, to be honest with you. I’ve seen a lot of people I don’t know. So, I don’t know. If I did, I don’t know. I really don’t”.

Finally, he was asked whether or not anybody spoke to him as a representative of the team, such as a coach, about his usage of social media. “Not that I remember”, he replied, though he made some references to Twitter limits and fines at one point, which could have been a joke. “It’s my Twitter, so they can’t control it”.

I’ve seen a lot of comments in reply to this video, trying to draw contrasts to Bush and those Steelers we just saw over the weekend, either being enshrined or presenting those being enshrined, or just there to support their former teammates. The implication is, what happened to the Steelers?

Well, those Steelers didn’t grow up with social media, for one thing. Just like the generation before them didn’t grow up with whatever people were complaining about with regard to them. You may not want to know what a young, 23-year-old James Harrison or Ike Taylor would have said on Twitter. It may have had you questioning what has happened to the Steelers.