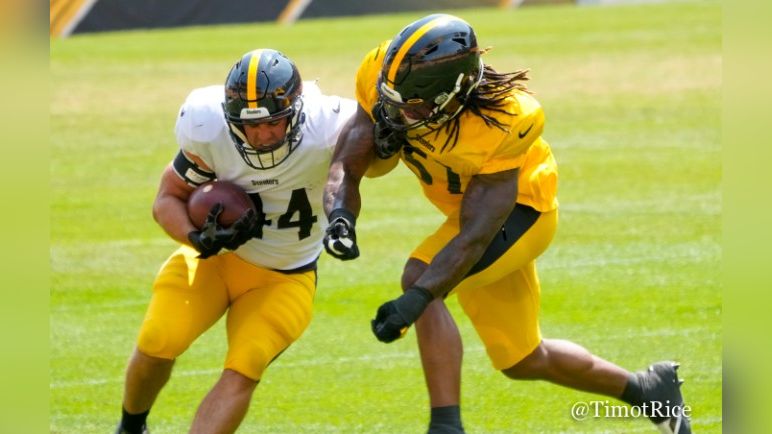 Pittsburgh Steelers fans love fullbacks. They don’t love paying players who don’t seem to be contributing at the level that they ought to. And so this is where we find ourselves a year later with Derek Watt, whom the Steelers made the second-highest-paid fullback in the league a year ago on a three-year deal worth just under $10 million.

Lauded for his durability, the middle Watt brother dealt with nagging injury through much of last season and missed the first games of his career, but he still suited up for 12, and ultimately logged over 200 snaps on special teams, making eight tackles.

But fans want to see him blocking on offense and helping the run game—and perhaps more. Roosevelt Nix was a fan favorite, and the very few times he got an opportunity to catch the ball were an event. Will Watt get some opportunities this year, now healthy and in a different offense? He did field a wheel route in practice yesterday for a big gain.

“Definitely, if there’s a chance to go out for a route, definitely excited”, the sixth-year veteran said of the potential opportunity to contribute through touches. “Always ready for the ball. Any chance you get to touch the ball is a bonus for me. Definitely excited any time you get to run around and catch the ball”.

Last season, he didn’t register a single carry, nor was he targeted even once in the passing game. While he wasn’t a significant offensive contributor with the Los Angeles Chargers, he still managed about eight or nine touches per season.

Of course, when you have a deep receiver group, and tight ends and running backs who can catch, with a first-round ball carrier in the backfield, there isn’t a lot of native incentive to feed the ball to your fullback. Even the opportunities he may get won’t necessarily be intended for him.

“It’s a wheel route, but it’s not like the ball is going to me and only me”, he said of the play from practice today. “I don’t even know if I’m the first read. But when they don’t cover you—Ben said he looked out there and he thought he didn’t see it properly because I was so wide open, nobody was there”.

Regardless of what may happen on offense this season, his salary will still be coming primarily due to his special teams contributions. In his four years with the Chargers, he averaged nearly 300 special teams snaps per season, and totaled 35 tackles, including 16 in 2019.